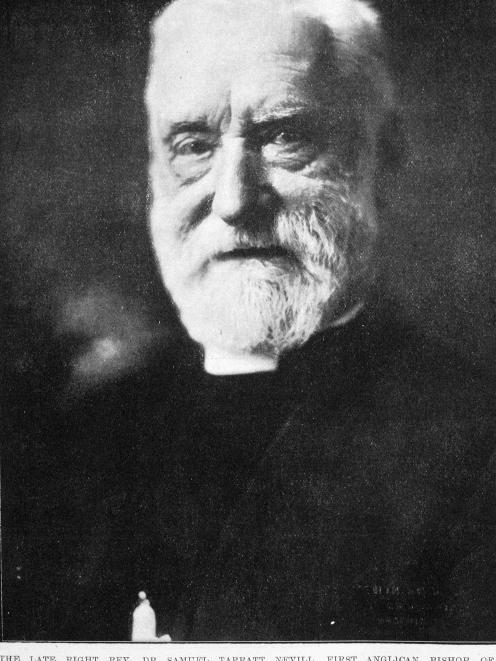 It is with much regret that we announce the death of the Most Reverend Mr Nevill, until recently the Anglican Bishop of Dunedin and for several years the Primate of New Zealand.

Bishop Nevill was more, however, than the oldest surviving minister of religion in Otago and a resident of Dunedin of very many years’ standing: he was the senior bishop of the Anglican communion throughout the world. His own active episcopate extended over nearly fifty years. He was consecrated on June 4, 1871, to the office of bishop of a diocese which was at that time merely a geographical expression.

Bishop Nevill had spared neither his means nor himself in the effort — an heroic effort it was at times — to establish in Otago an Anglican church which might redound to the glory and honour of his Master. In his death, full of years, the Anglicans of Dunedin and Otago have lost a chieftain and pastor whose presence had assumed a rich patriarchal significance.

That the Anglican community in this diocese owes much, very much, to the devoted work of the departed bishop is a fact which does not, or should not, require to be emphasised. In very literal truth, he spent and was spent in its service. The general public knew how earnestly, and yet patiently he worked for certain openly avowed designs, such as the establishment of Selwyn College and the building of St Paul’s Cathedral; but there is no record on earth of the continuous, self-sacrificing, anxious labours of those long years of pastoral care.

The foundation stone of the memorial arch to the ex-pupils and ex-teachers of the Kaikorai school who gave their lives in the great war for the cause of liberty and justice was laid on Saturday afternoon.

The weather was delightful and the gathering was a very large one, representing all sections of the people. The Band of the Fourth Regiment, under Lieutenant S.S. George, played the music, and there was a fine turn out of members of the Masonic lodges, the actual ceremony being performed by the order in accordance with its ritual.

The school choir sang the hymn “Oh God, Our Help in Ages Past”, and this was followed by a scriptural reading by the Ven Archdeacon W.A.R. Fitchett. The Rev W.R. Hutchison (representing the Returned Soldiers Association) led in prayer and the hymn “Thy Will Be Done” was sung by the whole gathering. During the Masonic service RW Bro J. Scottowe Webb DGM, EC, said that as the father of three sons, pupils of the school, who went forth to serve their King and country, two of whom returned wounded, and the third made the supreme sacrifice, he felt it a great honour to have been asked to arrange the ceremony.

The object was to lay the foundation stone of a memorial arch to the heroic dead, former teachers and pupils of the school who made the great sacrifice. The ceremony of laying the stone was performed by the New Zealand Grand Master, Bro T. Ross.

In a casket under the stone were deposited a list of the dead, copies of the Otago Daily Times and the Evening Star, a copy of the day’s programme, a copy of the Kaikorai School jubilee souvenir, the names of the numbers of the school staff and of the school committee, a photograph of the entrance gateway to the school, as existing before the commencement of the work, a photo ‘‘Regiment in the Great War’’. Corn, wine and oil were poured on the stone — symbols of bounty and plenty, joy and gladness, and peace and love of humanity.

A Masterton builder, commenting to a Wairarapa Age reporter upon a paragraph that had appeared in that paper with reference to a report regarding the use of Pinus insignis for building purposes, stated that it was wrong to condemn that timber. If used with proper care it was very satisfactory.

The trouble, he said, was that it was often cut from young and unsuitable trees. If taken from properly mature trees he had found it acted very well. It certainly had the disadvantage of attracting the borer, but he pointed out that every other New Zealand timber, with the exception of two, also had that disadvantage. — ODT, 31.10.1921.