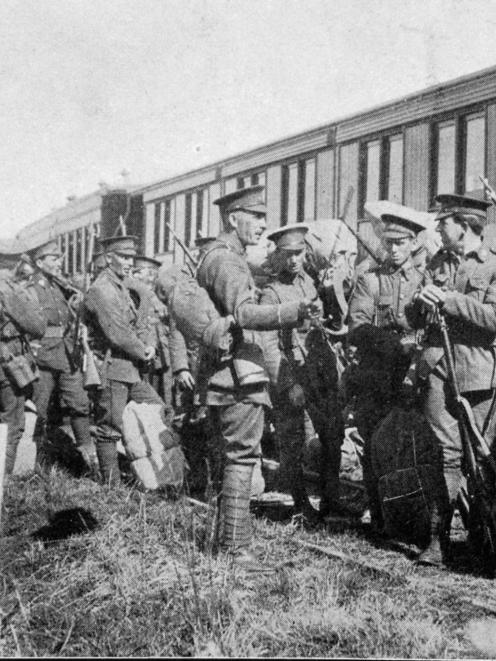 Infantry entraining at Musselburgh, Dunedin, en route to embarkation at Port Chalmers. - Otago Witness, 30.9.1914. Copies of picture available from ODT front office, lower Stuart st, or www.otagoimages.co.nz
The Amenities Committee of the Dunedin Expansion League is displaying a laudable energy in urging upon the Ocean Beach Domain Board the desirability of adopting a scheme for the construction of an esplanade along the sea-front from St Clair to St Kilda.

Plans have been secured from the city engineer, and the Committee has fortified itself by obtaining a report upon Mr McCurdie's proposals from the engineer of the Harbour Board, the advice of a marine engineer being justly considered to be of importance in connection with such an undertaking.

The cost of the scheme submitted has not yet been calculated, but an estimate is being prepared.

Members of the League in expressing their views in deputation before the Domain Board were able to use the strong argument that the present time is particularly opportune for the inauguration of such a work, as a considerable amount of the necessary funds will be provided by the Patriotic and General Welfare Association out of donations received by it from the public for the relief of those who have lost their employment owing to circumstances created by the war.

It is pointed out that if there should be further delay in carrying the esplanade proposal into practice an exceptional opportunity will be lost of providing work for those who urgently need it at the same time as a valuable asset is being added to the city.

The representations presented to the Board carry very considerable weight, and the Board has done the right thing in receiving them very favourably.

The Chairman properly laid stress, however, on the necessity for the exercise of great care in carrying out works of magnitude near the sea-front, and mentioned in particular the need for careful consideration of the problem of drifting sand.

As the engineers of the City Council and Harbour Board are to consult and report upon this aspect of the undertaking, the members of the Domain Board will doubtless receive shortly some important and, it is to be hoped, reassuring information upon the point regarding which they are inclined to be dubious.

Concerning the merits of the proposal to construct an ocean beach esplanade it is hardly necessary to speak.

Opinions will probably differ as to their magnitude.

When man sets to work to improve upon Nature his handiwork is not always to be admired.

Very frequently what he designates as ''improvement'' involves sacrifices that are calculated to make the judicious grieve, though from a utilitarian viewpoint they may be justifiable.

The greater reason exists, therefore, why a scheme that would involve a considerable alteration in the natural conditions at the Ocean Beach should only be embarked upon very carefully and with the exercise of discrimination and foresight.

For some months past the Presbyterian Church has been occupied in establishing a day and boarding school for girls.

It will be remembered that the scheme of the church was to acquire the property of Bishopscourt, adapt it for the purpose of a college, transfer to it the school which the Misses Miller have for some 20 years been carrying on at Braemar House, and formally constitute the college in February under a permanent principal and staff.

In a few days the Misses Miller will enter the new college with their pupils and finish the session there. In February, 1915, Columba Girls' College will be formally opened.

The principal, Miss Frances J. Ross, M.A., will be assisted by a staff of thoroughly qualified and trained teachers. - ODT, 19.9.1914.