1080 not answer to saving NZ birds 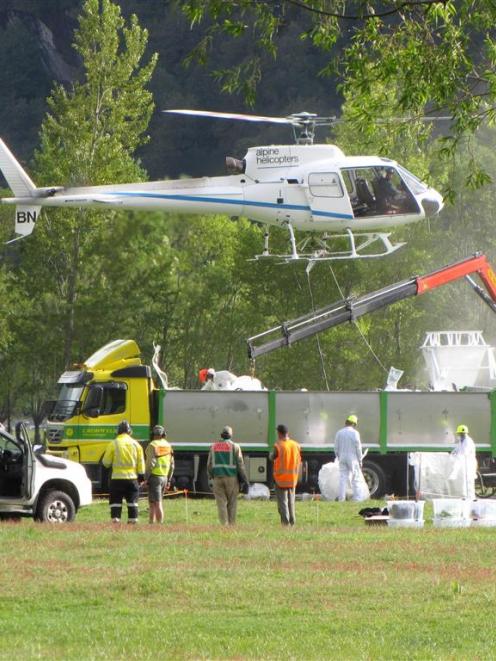 Work progresses on a Department of Conservation 1080 poisoning programme in the Mt Aspiring National Park near Wanaka in 2014. Photo by Mark Price.
It's time to think again about aerial 1080, Fiona McQueen writes.

Something you don't expect to find when tramping through pristine native New Zealand forest are carcasses of poisoned animals and native birds lying on the ground. Yet this was the experience of trampers in Fiordland following the massive aerial 1080 pest-control campaign of August 2014. A group of Glenorchy locals was walking the Caples-Greenstone track, two weeks after the poison drop.

As one of them recalls: ‘‘There were dead birds on the ground.''

The others were hunters, exploring the remote Hokuri creek, near the Hollyford valley. Although this was three months post-1080, they found deer carcasses, dead possums and native birds on the ground. These people witnessed something deeply disturbing. Our current pest-eradication policy has also excited adverse comment internationally.

Two articles recently appeared in the Biodiversity column of The Economist noting that invasive species are ‘‘fiendishly hard to eradicate'' and that ‘‘NZ will not eradicate rats (using poison) any more than Britain was able to wipe out grey squirrels''.

The author commented that the idea it is possible to restore the balance of nature to what it was before human intervention is at best ‘‘misguided''.

For those who wish to learn about 1080 there is much information from the Department of Conservation on the internet. It is often referred to as a ‘‘rodenticide''.

This misrepresents the fact it is toxic to all vertebrates including birds, as well as many invertebrates.

Typing in ‘‘Does 1080 kill NZ native birds?'' elicits the following: ‘‘Tomtits and robins are the most vulnerable native bird species, but as they are prolific breeders they recover quickly and thrive as a result of the reduced predation that follows successful 1080 operations.''

I personally do not find this reassuring. The answer is clearly ‘‘Yes''.

The information about the kea, now an endangered species, is even more disturbing.

Given that the total NZ (and world) kea population is now estimated at less than 2000, this surely represents an extraordinarily cavalier approach. The kea was given full protection under the NZ Wildlife Act of 1953.

That a government department charged to preserve and protect native species is deliberately dropping poison into its habitat beggars belief. In the 1970s, kea were still thriving on the West Coast.

The devastating fall in their numbers during the past 30 years has coincided with the increasing and repetitive use of aerial 1080 in that region.

One of the main justifications given for the 1080 campaign is that reducing predators will benefit native birds. However, ecosystems are complex and simple knock-down of rats may have far-reaching effects. For our native fauna, 1080 can cause direct poisoning, termed ‘‘by-kill''.

This means a slow death, not just for tomtits and robins but many other vulnerable species including kea, kaka and insects. There is no known antidote. It was concern over by-kill that caused the Environmental Protection Authority to cease widespread 1080 use in the US in 1985.

Bird survivors of the initial onslaught will benefit from reduced rat numbers the following year with improved breeding success but after two to three years rat numbers bounce back to pre-drop levels and may overshoot.

A rat plague was reported in Karamea following the 2008 1080-drop in Kahurangi National Park. Rats have extraordinary fecundity: a characteristic of many invasive species.

A breeding pair can produce more than 1000 offspring per year, compared with kea, which lay only two to five eggs per season. Stoats are decried as one of the greatest threats to native birds but they are fastidious carnivores and often do not take 1080-bait.

However, they eat rats. The balance between species is critical and when rats are reduced immediately post-1080, stoats can switch to preying upon birds.

The ultimate result of repeated poison drops could well be a forest full of rats and stoats with very few native birds.

There are many other concerns about 1080; its persistence when dropped into cold environments, its proven toxicity to aquatic life and its mutagenicity in mammals.

The case against using this chemical indiscriminately over vast tracts of native forest (some of which borders our own cities and contains their water catchments) is very strong.

How then should we control pests? Aerial 1080 is touted as the most cost-effective method but the current programme consumes $60 million of taxpayer money. Opossums were deliberately introduced to NZ to establish a fur trade and the merino-possum clothing market makes this a viable option today.

However, possums killed by 1080 are currently left to rot on the ground, providing a source of secondary poisoning. The fur itself is wasted.

An alternative strategy would be to incentivise possum trapping, boosting the fur industry and relieving unemployment in areas such as the West Coast. This could be achieved without the grim reality of ‘‘by-kill'' and allow our international ‘‘clean and green'' image to regain some credibility.

● Fiona McQueen is Professor of Rheumatology at the University of Auckland and a consultant rheumatologist at the Southern District Health Board.