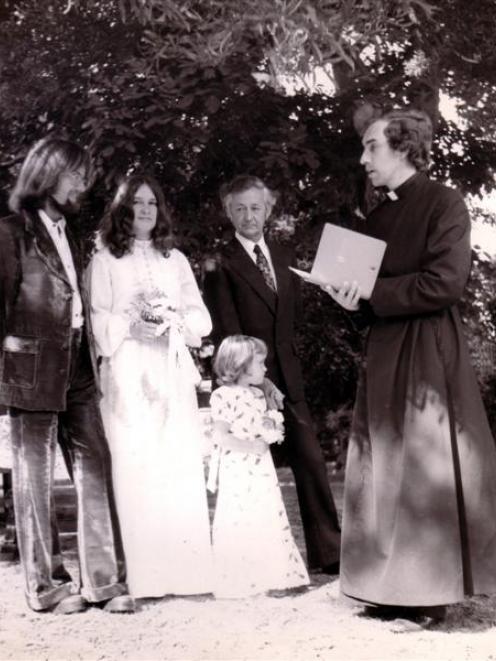 The Colberts' 1970s marriage in Christchurch. From left, Roy Colbert, wife Christine, daughter Shannon, Christine's father Harry Taylor and the Rev Bryan Eagle. Photo supplied.
The 39th wedding anniversary slipped seamlessly into Queenstown's unyielding blue skies last week. Thirty-nine is probably a world record when you look at marriages these days; well, the ones we are told about on the telly.

Married for nine days, a couple more years sorting out the settlement, and ptoof, it's over. We may not be on the E Channel, but we are heading into year 40, that's something, innit?What is 40 in marriage terminology? Can it be diamond already? I'm not going to look this up. I spend all day looking things up. This sort of thing should be in my head like the nine times table. Zinc? Garnet? Balsa wood? Kryptonite?

Actually it's much more than 40. We lived in sin for a year before marriage and were turned down for a housing loan by every bank in town. Not married, come back when you are, they said, and by the way, it's not moral what you two are doing. But we have three jobs, we are richer than Croesus, we wailed. How could you not be married, they countered, frowning. Now complete strangers in suits grab me as I walk along the main street begging to lend me money. For anything, they cry, even a dairy farm.

Thirty-nine years done. But then you look at when the first glance across a crowded room occurred, and you are suddenly closer to 50. I know I am. My wife is a few years behind, as while I spotted her, was smitten and neo-comatose at the St Patrick's Table Tennis Tournament in Timaru in 1965, she claimed not to have noticed my smitt or my neo-coma, and claims her first desirous look in my direction came at an extraordinarily drunken Otago University Sports Tournament three years later. So I am 48 years in and she is 45. Silver? Aluminium? Vinyl? Tin?It would be pointless and self-destroying to say where we celebrated this thing. No rational thinkers like Queenstown's psychotic architecture and town planning, but they do agree the mountains and lakes and Beach St ice-cream parlour are all very pretty. I guess the trick is to stay well clear of the man-made wealthy bits.

But we didn't, because we had a deal. New Zealanders love having a deal. It is embarrassing standing beside them overseas. Have you got a deal, they ask us, even though we have being speaking faux German for 30 minutes to ward off a conversation such as this. But as Oscar Wilde said, and I'm paraphrasing, if a deal involves a Hilton hotel, gobble it with all the swallow you can muster.

The name Hilton has always made me flinch, right back to Nicky, who slept with his stepmother, Zsa Zsa Gabor, became Elizabeth's first husband, for a year, and died of drink at 42. And whatever happened to Paris Hilton? She came and went with Kardashian speed. Maybe she IS one of the Kardashians? Is it a franchise? But these are low blows. Let me tell you this, the bathroom at the Hilton had separate basins and a phone by the toilet. Yes! These are two of life's true treasures.

And, phew, we rode on the same water taxi the Highlanders rode the night before. The driver said he had the whole 22 in there and they weighed three tonnes. The man was clearly out of his mind with fan-driven delirium. Do the math, and do it in the old weights and measures systems we all understand: three tonnes is 20 stone per man. If the Highlanders are really that big, and we know they are fast, then they WILL win the Super 15 this year; put your money down now.

Will we stay here for our 40th anniversary? Will they still have hotels this time next year, or will everything be on smartphones? I know I am looking forward to the young cub reporter from the ODT asking us what the secret is. Give and take, mate. Brass? Styrofoam? Ebony? Gold? Yes, I think it might just be gold.