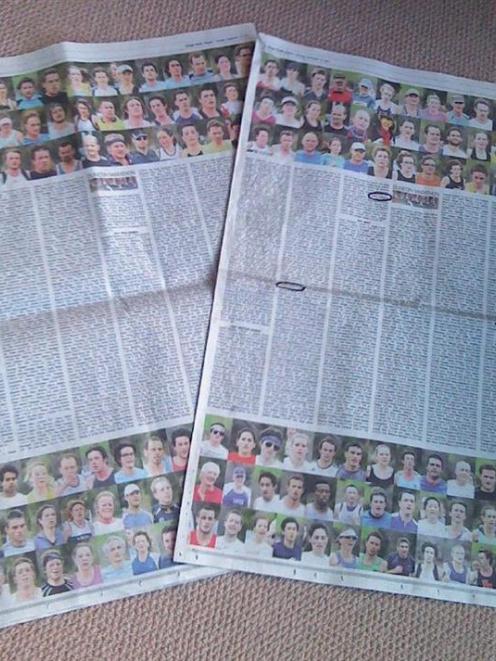 If you are walking purposefully towards an appointment along Dunedin's main street, and you have lived here all your life, it is an absolute given you will meet someone you know who will make you late. Dunedin is that small.

It is rare for me to see fewer than 10 people I have to stop and talk to when rushing to hospital to have my life saved. But I am resigned. I know virtually everyone in this town.

Imagine then my numbing incredulity when I confronted the results from the Dunedin Marathon in the sports pages of this newspaper eight days ago. It has taken me eight days to read them, that's why I only bring it up now; 1830 names and 168 colour photos spread over two pages. No ads. An astonishing publishing triumph that no other newspaper in this country would even attempt. I doubled the size of my breakfast to read through it on the first day, but, losing my place constantly, still made only a tiny inroad.

But as the days went on and I worked my way through, pen in hand to encircle those I knew well enough to talk to on the main street, it became bewilderingly clear that I knew virtually nobody.

I had been a long-distance runner myself once, as a boy, and had noticed over the years that a number of my contemporaries from back then were still hacking away. Where were they in this humungous sprawl of names and times?

It became painfully apparent I know only those placed by Murphy between me and the hospital to make my life as miserable as possible. In a list of 1830 names, I knew only four.

Let us look at those four.

Brent Edwards, former sports editor of this paper, admitted it had been something he had meant to do for many years. Fair enough.

I am not without similar ambitions. As a long-distance runner with no speed, I fancied myself as a marathon runner many years ago, inspired by both the metronomic plod towards victory of Aesop's tortoise, and the defiant bravery of Britain's Jim Peters. Peters entered the stadium at the 1954 Commonwealth Games in a wobbling semi-coma heading in the opposite direction, a direction that would only get him to the finishing tape if he ran right around the world. I no longer cherish any desire to run a marathon. What run I have left is no more than a very light lurch.

But Brent only did the Half Walk, 452nd in 3 hours 35 minutes and 35 seconds. That sounds like my kind of pace.

Judith Holloway. Judith, brought to a racing peak in the labrynthian corridors of the Hocken Library, finished 193rd in the Half Masters Women. Two hours 51 minutes and 27 seconds.

Slightly ahead of her in the same event was former Hocken workmate, Louise Sinclair, a skilled hockeyist who has been known to train like Hamish Carter.

Louise finished 115th in 2 hours 14 minutes and 38 seconds. Thoroughly satisfying. Judith said it was deeply humiliating to be passed by 58 walkers on the home stretch and she has memorised all their names for next year. A longtime admirer of Lomu, she intends walking over all their heads.

And Jim Kerse, who was in my year at high school.

West Otago. Strong of body and game as they come, Jim went on to play a dizzying number of sports before gaining newspaper feature fame for entering those events only madmen contemplate - running, swimming and kayaking through Death Valley in high summer with a bag of sand taped to each leg and arm. An extreme athlete. Jim finished 67th in the Full Masters in 4 hours 50 minutes and 27 seconds.

Next year is, I suppose, a slim possibility. Maybe not the Half Walk, perhaps the Quarter Crawl.

But I'd love to get my name in this list. You have to have something to show the grandchildren.