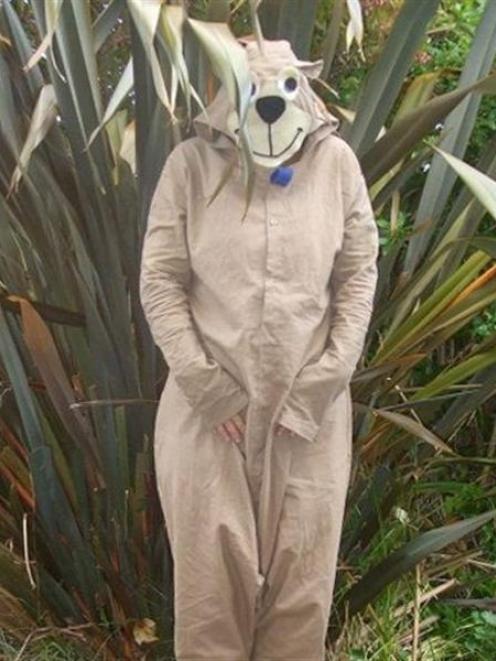 This Yogi Bear suit won the day at the Green Island dump. Photo by Ceri Jenkins.
The world is filled with false information, crazy stuff we haul aboard like lemmings in reverse, toppling towards the next phase unaware we are living in a house built on sand. Eat your vegetables or you won't grow. What mountainous piffle this is. I have hoovered up vegetables like a Dyson all my life, yet I've never been bigger than small. My mother took me to school on the first day in her handbag.

Treat other people like you want to be treated yourself. Arrant humbug. My demands are slim, I merely want to be treated to coffee pavlova every day. So, I have to give my 551 Facebook Friends coffee pavlova every day? I can only begin to calculate the cost of clinging to this mindless homily. In a normal lifetime of three score years and 10, I'll warrant I would spend 28 fadrillion English guineas. That's a lot.

Civic pride. Classic! We are constantly told by tourism writers, and I have to be careful here because I love Dunedin to bits - Olveston, phew! - that we have the best this or third-best that. Wasn't there something recently about the Railway Station? But there are other treasures these junketed tourism writers sail past as if they don't exist..

Yes, you know where I am going with this. I'm talking about the shop at the Green Island dump.

This place is an absolute mindsnap. Mock me if you will that it took me until last week to discover this unassuming trove, bursting with things other people want dumped in the ocean. As a non-driver, I just don't get to faraway destinations. But last week, my driver, a scion of such places, showed me the switch to make it light.

We hadn't even got inside when I found my first mouth-watering thing. A lesser man would have walked past it, a long red unlabelled rectangular box, but I have never been a lesser man, and when I lifted it up and found it to be really heavy, I knew only quality would reside within.

The man that runs the shop came over.

Of course I wanted it. And when I opened the box, I wanted it even more - a collapsible one-piece picnic table and seats. Complex and intricately engineered, clearly designed by one of those fine minds from MIT, which is another way of saying not Made In China, this was a compellingly useful object. I loved the little seats.

Well, of course I was never going to sit on the seats; this was for the grandchildren. We seem to be picnicking every second day, and if there is a way I can move them away from OUR table so I get to eat all the coffee pavlova without their 10 fingers stabbing at its every sugar grain, than that would be fantastic. Plus, the boys have very small bottoms, and as Dylan once sang in arguably the finest of his word salad songs: ''small bottoms never break the seats/not even if they grow/of plastic dump shop tables down/in Desolation Row.''

After almost buying a superb yard broom - we have lost ours, probably stolen, though you'd think they would have stolen something else as well; my driver said the broom belonged to the yard - I trawled through records for an hour or two. Some habits never die. My driver was sagging beneath the weight of a porcelain bowl of rare beauty into which she felt she may be able to put flowers. I saw it more as an umbrella stand.

But she then won the day with a full-size still-in-its-original-packing Yogi Bear suit. Two dollars. I could have cried. I immediately offered her seven. She laughed. The shop at the Green Island dump is wild, dangerous and unpredictable. There is no online store like it.