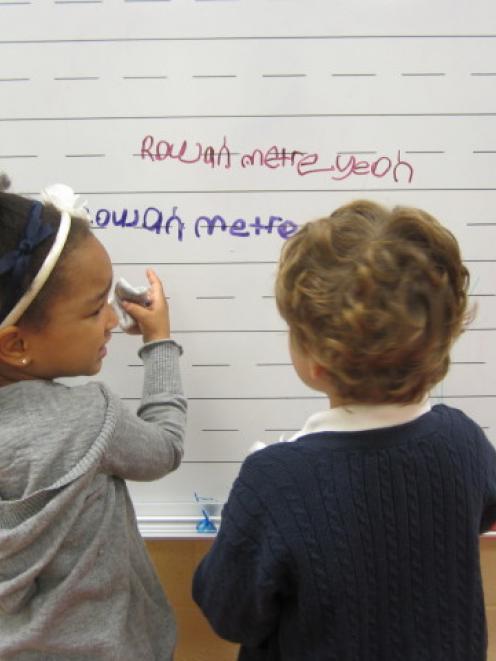 Rowan and his class-mate Rhianna. Photo supplied.
Children should always be photographed from behind. I am thrown into a coma of shame when I realise how long it has taken me to realise this. Most humans, I am sure, worked this out very early on.

But most humans don't have a daughter in Chicago with a snazzy camera who whangs off photo after photo of our two grandchildren doing every possible thing a child can do and sends them to us daily.

Huge files slow our internet connection to a rhinoceroserial plod, boxes of photos arrive carried on the heads of pygmies from Central African tribes Wikipedia has no record of. We buy backup terabyte hard-drives for photo storage like normal people buy potato chips.

And the photos are always face on, never from behind. The two boys, parented as they are by two actors, have a congenital ability to work a camera I can only compare to the excellent current crop on New Zealand's Next Top Model. They click seamlessly into camera pose, shaping their facial moves every which way the photographer wants. They know all about money shots. I have never perfected a camera face.

My parents were not actors, so I just freeze and look glazed - I call it nonchalant - every time a camera points my way. "Just relax," comes the command : "I can't," comes the reply. Nobody ever photographed me from behind.

Rowan has just had his last day at pre-school in Chicago. A multitude of shots were taken by the mother, including one, just one, from behind. And in a total of grandchildren shots which at last count numbered 487,203, this is by far the finest of them all. Rowan in a satirical black AC/DC T-shirt (AB/CD) at 18 months was good, as was the one of him holding a Stratocaster guitar aged 3, SO cool. The one of younger brother Jude discovering snow was so enchanting it could win competitions in 11 continents.

However, last week's pic of Rowan and his class-mate Rhianna knocks all previous shots into a cocked hat. Rowan is on record as saying Rhianna is a pain, but our daughter assures me they always play together, and that teacher, Ms Silva, frequently has to discipline Rhianna for going over to Rowan's table during lunch or calling his name loudly across the room. They are clearly inseparable.

On this last day, Rowan decided, for his favourite activity station, to write on the blackboard with Rhianna, which was quite an adult choice for a nearly-5, given what other fun was on offer. So he wrote his name twice and then listened intently as Rhianna pointed out things with her index finger we can only guess at, and his mother clicked the camera like a dervish filled with whirl. From behind, you can see he is absorbed, that they really are the best of friends: facing the camera, standing beside that damn pain of a girl, he would surely have chosen a pose of laodicean disdain.

The shot reminded me of an old Pozo Seco album cover Shades of Time, an award-winning photo of two children walking hesitantly hand-in-hand out of a dark forest into sunlight, the big wide world that awaits them. You don't see the faces of the children, but it's so much better for the wondering what's there.

Rowan recently passed an entrance test for the city's leading gifted children's school, which apparently puts him in the top 2% of all the kids his age in Chicago. He said he loved doing the test so much he wanted to do it again. Rhianna didn't sit the test. She will just move on to another school with mostly the same kids she has been with under Ms Silva. She may never see Rowan again.

Rowan says he won't miss her. But I'm looking at this photo, and I think he will. And I know she will miss him.