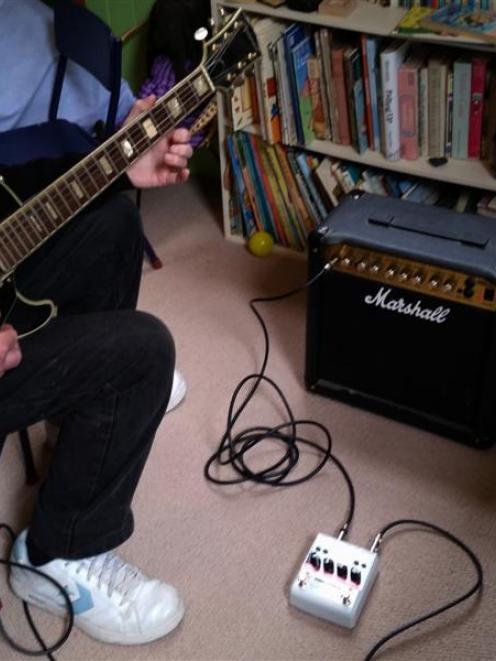 Roy Colbert in effects pedal mode. Photo supplied.
They say everyone has one book in them. I have spent a lifetime searching for that book, while some writers, who can really only be referred to as idiots, have written more than a dozen.

But my ongoing Homeric quest towards what is essentially a quest as simple as pie, playing the guitar, something idiots have absolutely no trouble with, may have led me to that one book. The title came to me in the bath last Thursday evening.

''Broken Strings: Setbacks in Seeking Guitar Ecstasy'' by Robin La Farge. Yes I made up the author's name too. You have to. And Robin is both androgynous, the J.

K. Rowling marketplace trick, and romantic. La Farge just rolls so richly off the tongue, like honey, which actually sticks to the tongue, but you know what I mean. And everyone would buy a book if it were written by a romantic person. La Farge is romanticism wrapped in European mystery, perfect for bookshop Recent Arrivals tables.

I wrote recently about the half sized guitars I ostensibly bought for the two grandsons, but knowing in my heart they were for me and my small hands and inability to barre chords. The boys have dabbled in them, but only dabbled.

I have dabbled slightly more, but realised what the cheap price should have told me, that once you go beyond the fourth fret, tuning becomes a mockery of all things musical.

The Next Step, therefore, probably around chapter 4 in the La Farge book, which I would hope to have on the shelves by Christmas - will try and price it under $20 - is to either pursue a career in Free Noise, which some of my close friends have done with extraordinary success, or buy a powerful effects pedal that will cover up my atonal stumblings beyond the fourth fret.

The latter naturally won out, as there is probably no finer thing in the world than an effects pedal, and I was consequently overjoyed when finding a Boss RC 3 Loop Station at the local auction house.

This is a magnificent little thing, perfect for someone who cannot play. I need only record a simple sound, and the Boss can play that back to me - and the audience - forever. I can even make tea and biscuits while it loops; only the most musically sophisticated members of the audience would know I was not actually playing at all.

Go and see Roy playing guitar while he makes tea and biscuits, they will say, it's like watching Hendrix play behind his head.

But, and this was, sadly, a humungous but, the Boss unit at the auction was in an unrelated lot of three, one of which was wood lathe equipment.

Now, the Opposite Roy I wrote about last week, he who promised to do things he had never done before, would have watched the bidding keenly, recognised the most dangerous bidder, and sidled over with a whisper to see if he wanted the Boss.

If he didn't, Opposite Roy would have said, I won't bid against you, bro, but I'll buy the Boss off you afterwards.

But, and this is another humungous but, Opposite Roy lasted only one day after a rowdy incident in the supermarket with a man who rammed his trolley into my bottom just because I had paused to answer my cellphone.

I should have pressed charges, but I instantly reverted to Normal Roy, and Normal Roy doesn't press charges. Neither does Normal Roy sidle over to strangers at auctions and engage in illicit deal making whispered conversation. So, I missed out on the Boss.

But, and all things come in threes, even buts, I immediately went online in search of a hopefully cheaper looper.

This is primarily a delay pedal, but delay is good. And it does have a looper, just as I have a guitar, a Marshall amplifier and a ton of pluck.

I live by the John Lennon mantra: ''I may not be the world's greatest guitarist, but I know how to make it howl and move.''

The Nux will be turned loose this weekend. Open all your windows.