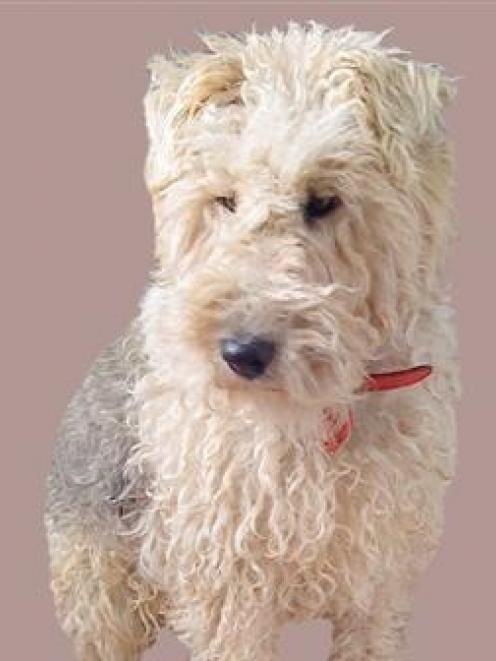 When all else fails ... Beat a dog at Scrabble. Photo supplied.
Aesthetes and lovers of fine hockey flocked to the city from all corners of the earth to celebrate Brian Turner's honorary Doctor of Literature from the University of Otago. Two of them, from Cambrian, stayed with us for one night. We were, as always, peerless hosts.

My wife went off to Christchurch the following day and left me behind to make sure no dust surfaced in any of the rooms.

Our house, you see, does not clean itself.

Late that day, the couple returned. I presumed they were bringing a thank-you gift they had been shopping for all day, possibly scorched almonds. But no, they brought me a dog. They were staying one more night, somewhere else, and this somewhere else thought dogs were the work of Satan, wholly unworthy of admission to their building. So little Milo, a wire-haired fox terrier, was going to stay with me. He will be fine, said the couple, and, if he isn't, here is a box of special treats, use them sparingly.

Our last dog, Holly, was inbred and aphasic. Were she a human, she would have been constantly remanded for a psychiatric report. I loved Holly deeply, but she gave me no more feedback than a shoe, and as a consequence I learned very little about dogs. After the couple from Cambrian had run chuckling into the night, I surveyed my sleep-over carefully.

He had a very similar blank visage to Holly, which almost suggested there was nobody home, though I would never have said that to his owners. When I told him I ran a very tight ship and if there was any funny business I would put him in a bag behind the fridge, he didn't bat a wired eyebrow. I gave him a special treat.

It was clearly going to be a long night. Milo didn't want to watch any movies, not even Submarine, the stunner from the recent film festival.

I explained why it was so great, but the dog, by Terrier out of Tussaud, didn't move a muscle. I gave him another special treat.

I wondered if that infantile way owners speak to their dogs was the conduit that opens the comprehension door. So in a furtive lowered voice, I asked sweetie peetie Milo Silo if he wanted to play a teeny weeny game of chasey racey.

I raced out of the lounge roaring his name. Surely this would electrify his wired hair and send him after me with foam shooting from his teeth. We would spend the next hour hurtling from room to room until he finally keeled over completely knackered and slept until sunrise without needing to be taken out for wheeze. I waited a few minutes and then re-entered the lounge. Milo had not moved. Perhaps he was asleep?

I gave him another special treat. His mouth was certainly awake.

But in moments of abject despair, great thoughts so often rise Phoenician-like from the ground until they are towering above you with both thumbs raised : I would play Milo at Scrabble. I have never beaten anyone at Scrabble, apart from my wife that time when we lived in Malvern St and she was so far behind she angrily swept the letters from the board, embedding three of them in the far wall. Labour politician Pete Hodgson bought that house from us, and he never tires of asking me how we got those Scrabble letters so far into the wall. I looked at Milo again. There was no way this dog could beat me at Scrabble.

We played for three hours, the All Blacks' underdone feeblism against Australia flickering behind us on the giant telly. The rugby did engage part of my brain, and perhaps that was why I lost three games. But I won 126. Milo was reduced to a motionless numbskull who couldn't even pick his letters from the box. But I was gracious in victory. I gave him a special treat.