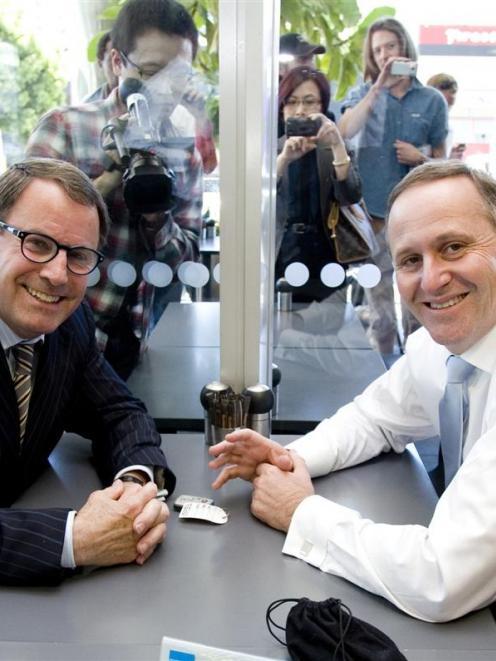 John Banks (left) and John Key. Photo by The New Zealand Herald.
Peter Lyons argues that, while there is much scope for innovative public policy to improve teacher and school performance, charter schools are not the way to go.

The concept of charter schools is a radical yet unheralded change to our education system. It is disconcerting how readily the Government has agreed to John Banks' and Act New Zealand's coalition demands in this area given the likely furore it will cause. It creates an unease about other potential policy reforms that have not been signalled during the election campaign.

Act has never made any secret of its desire for market reforms in the school sector. Its spiritual mentor, Milton Friedman, believed that parental choice, educational vouchers and competition between schools to attract pupils, teachers and funding would ensure greater efficiency in school and teacher performances. But there are major fish-hooks in this simplistic vision for improving educational outcomes.

The concept of charter schools emerged in the United States in the 1980s. They are based on two fundamental principles. These schools are funded by government and private interests but are more autonomous than state schools in terms of the regulations and requirements that they must conform to. They differ from private schools because they do not charge compulsory fees. The autonomy gives them greater flexibility in the curriculum they can offer and the staff they can employ. In the United States this means they can employ unregistered and untrained teachers.

This can allow major cost savings particularly in a depressed job market.

The second fundamental principle is that these schools are funded on results. Studies in the United States show that underperforming charter schools are more likely to face closure than state schools in the same position.

They tend to be more accountable.

So what is the fuss about?

Parents in trial areas such as south Auckland and central Christchurch will have more choices about where to send their children. Principals will have far greater flexibility about who they employ. Schools and teachers will be more accountable based on results.

Unfortunately, this simplistic road to educational utopia fails to allow for the nuances and complexities of the real world of education.

The first flaw is that teacher salaries are the major cost component of most schools. In a depressed job market the incentive for a principal unrestrained by the requirements of any professional standards could be to employ the cheapest staff. Unlike when buying a pair of shoes or a cellphone, the consumers of education - pupils and parents - have little right of return if the product turns out to be shoddy. They get one shot at a good education. If this education is substandard then society pays for it in the future either in benefit payments or lost production or other ugly social statistics. By the time a charter school closes because it employed substandard staff the damage will already have been done.

Another flaw in the charter school model is the measurement of results.

Teachers and schools are very capable of manipulating academic results particularly under the current assessment regime of NCEA. This concern about the validity of results is why many primary schools are resisting National Standards. When jobs, promotions and school closures are on the line it is not difficult to find ways of manipulating results.

Less capable pupils can be refused admission, leaving them to the state schools. They can be discouraged from enrolling or sitting external examination courses. They can also be encouraged to sit mainly internally assessed options that are marked within the school. School administrators have long learned how to create a facade of documentation evidence of achievement to impress Education Review Office staff on their periodic visits.

There is scope for major reform to improve teacher and school performances in New Zealand. But the crucial market is the market for teachers rather than the market for schools. A well-funded market for teachers would ensure the best and brightest candidates entered the profession. Schools could then compete to employ the best candidates. Those schools in lower decile areas could be compensated with additional funding to compete on an even footing with affluent schools in this market. The flip side of creating such a market would need to be greater accountability for teachers, which is haphazard under the current system.

Teachers would be well remunerated but more accountable. Non-performers would not gain entry or quickly be encouraged to leave.

Charter schools are not an avenue to better educational outcomes in our schools. There is much scope for innovative public policy to improve teacher and school performance, but this is not the way to go. The immediate outcome will be that teacher unions will fight this move tooth and nail.

They will perceive this as a move towards undermining the status of their profession. They are right.

A key principle of our school system should be equality of opportunity.

This ideal, somewhat tarnished these days, is that all our children should be given a fair shot at success in life regardless of the lottery of birth. We currently have a prime minister who epitomises the benefits of such a system. Charter schools are not the way to go.