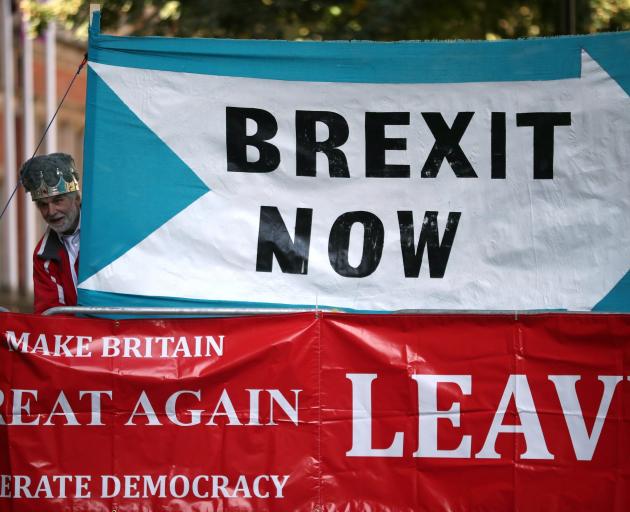 A crown-wearing pro-Brexit demonstrator stands next to banners in London last week. Photo: Reuters
We heap most of the Brexit blame on the wrong scoundrels. The chief knave isn't Blustering Boris, nor is it his tattered, flummoxed Parliament.

Neither is it some hidebound Brexiter or entitled Remainer. The true villains - the real architects of Britain's misery - are the Emperors of Brussels.

These Eurocrats park their importance not 30 minutes from the farmland where another would be European Emperor, Napoleon, lost the Battle of Waterloo. They are intent that this time, it is Britain that will be thrashed.

Forty-four years ago, 67% of Brits enthusiastically voted to surrender some ''minor'' national rights in return for the fine idea of a European trading block. But by 2016, the EU they voted to leave had mutated. Yard by meter, the Eurocrats have been constructing a new world state.

Thinking themselves the only trustworthy governors for a peaceful, virtuous continent, the Eurocrats will protect their invention by beggaring any member that says: ''No, we didn't sign up to be reduced to a European province''. The EU has attempted no reasonable accommodation to Britain's exit. The only ''deal'' offered was so suicidal it was thrown out by the largest majority in a contested House of Commons vote. Thrice.

The Eurocrats say their offer is ''immovable'', then smugly complain that while this means they won't accept new options, the moronic Brits keep failing to present them.

Behind the scenes snippets when the negotiators' microphones have been left open, confirm the obvious. The Eurocrats are lapping up the Brits' agony. They love it.

Today's European Union is the very worst example of mission creep. Working far beyond its first remit, it is taking over its members' sovereign powers. The incursions come dressed in honourable clothing. Eradicating bullying in Spanish schools, and protecting media in Hungary. Directing immigrant traffic and, of course, forcing reduced pensions for undeserving Greeks.

Each EU country has a national soul, but the EU itself doesn't. It is a ''country'' loathed by a goodly chunk of its citizens, with the rest loving it in much the same spirit that we love the bank manager who approves our mortgage.

The EU's worry is that allowing a fair Brexit may encourage other ''leave'' referendums. But whose fault is that?

Where next? In November Ursula von der Leyen succeeds Jean-Claude Juncker as president of the European Commission. (There is no popular election. The European Parliament must choose its president from its 28 European commissioners, all of them appointees).

Once Germany's Defence Minister, von der Leyen believes the EU would be better titled the ''United States of Europe'', and that its high time it formalised a European Army. Indeed, the European Parliament this year ceded control of its European Defence Fund to Brussels' unelected 28, - in effect handing over the future of their militaries.

Where will a European army march for tasty matches such as Hungary versus Border Refugees, or Catalonia v Madrid?

It is considered naff to make comparisons with the expansion of Hitler's Germany. But the word ''appeasement'' offers uncomfortable similarities. As Germany marched into new territories, Neville Chamberlain's appeasement policy was rooted in fears not totally unlike Brexit's - that is, stand your nation's ground and you risk catastrophe.

Even after Dunkirk, Churchill was fighting determined ministers certain that more appeasement would be far less damaging than resistance. (A defendable point).

It is claimed referendum voters were duped by Brexiteer lies. In truth, Remainers spent more money scaring the economic daylights out of possible leave voters. It now seems many Leave voters possessed so little they had nothing to lose by voting to return to their country's distinctive democracy.

The snag for Remainers is the referendum vote wasn't a demand to reform the EU, or beg a good settlement. It was an eviction notice - a direction to send it packing.

The first motive for founding the European Union was preventing another continental war.

Its defence cornerstone is Nato, a treaty underpinned first by America's power, and next by Britain's. The UK is by a distance Europe's strongest military member. It is also the closest EU ally to the US, and the only European allowed into the Americans' ''Five Eyes'' intelligence alliance.

If the EU insists on a rancorous Brexit solution, then whether the result is Leave or Remain, the EU will have badly burned a key defence partner. Nations prefer to cast blame externally, and a serious chunk of Britain will despise a Europe they'd no longer raise a finger for.

Nato has 29 members and its future is a rarely linked with Brexit talks. But it hovers as a card that may be brandished in a last, ''tear down the walls'', negotiation. And we know Boris Johnson and Donald Trump are leaders willing to play to different rules.

-John Lapsley is an ODT columnist who owned a market research business that did political analysis.

It was interesting to see online, Guy Verhofstadt's speech at the UK Liberal Democrats' conference last week and advocating for the European Empire. The Liberal Democrats if elected will not hold a 2nd referendum and will just revoke Article 50 and stay in the EU. Actually refreshing that they are putting forward an honest vision about the European Empire rather than the years of sly integration by various UK Governments. Other European countries have an open dialogue about the United States of Europe and gave their electorates referendums on the key points of integration so far in 1992 and 2008.