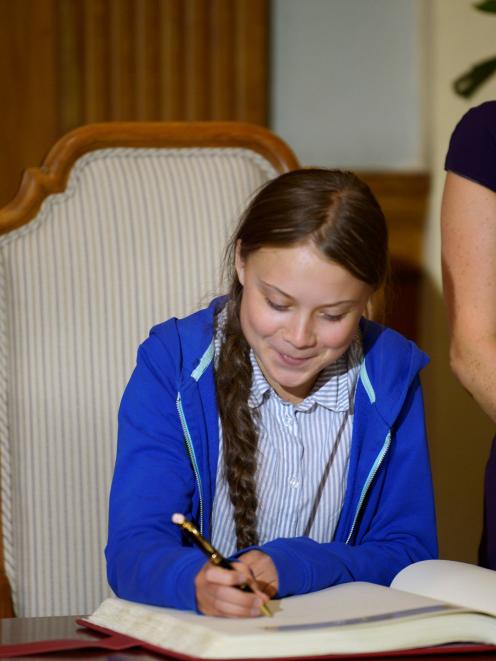 Luminaries flock to Uncle Norm because of his wise counsel. When pressed, Uncle Norm asks "Wit's End" to publish the overflow so that the nobs aren't left short of common-sense advice during difficult times. We are humbled to again oblige him.

I understand the Swedes have me on their shortlist for the Nobel Peace Prize, which would put the name Jacinda Ardern up there with other noted peacemakers such as Yasser Arafat and Henry Kissinger. This would be a great honour for a girl from Morrinsville, and the member for Mt Albert.

I'm told that apart from getting a framed certificate, and a trip to Stockholm (this beats Tuvalu!) Neve will receive a zillion photo-ops, and myself a prize of $1.7million, give or take a kroner. The latter is a teensy bit embarrassing. It is a lot of moolah, and I am a crusader against homelessness, inequality and poverty. Have you any thoughts on where I might find a more suitable home for this large amount of money? (The Salvos are too obvious.)

I've had a chat with one of your predecessors, John Key. At first he suggested he solve your dilemma via a game of golf with one of his ANZ wealth managers. However, after further discussion, J.K. concurred with my opinion that because you live under a Labour Government, the best home for your $1.7million would be a Cayman Islands bank account.

I understand you are a white man who is more than 50 years old. HOW DARE YOU! Your type, Mr Fossil, is directly responsible for the DOOM of my generation. I've read the right science books and I can guarantee that all school children will die. This is because of the carbon emissions you create as the driver of a 1999 Ford Focus, and a man who spreads too much butter on his toast. (HOW DARE YOU!)

I've also read that your Jacinda Ardern may pinch my Nobel Peace Prize. Did you know she jets round in a Boeing 757, and is ALMOST FORTY!

Greta, it's a wee bit of a puzzle, isn't it? The actuaries say that if Greta Thunberg had been born at the dawn of the Industrial Revolution, her life expectancy would be 35 years. Now, despite climate change, they believe it is 83.2 years. But actuaries are mere mathematicians who specialise in probability.

Science still beavers away at the problems of climate change. The wonderful thing is that at 16, you remain young enough to know everything.

I am a professor of psychiatry studying the case of an autistic 16-year-old Scandinavian girl who has a spectrum of mental disorders.

The child has attention deficit hyperactivity disorder - a condition which means the youngster becomes focused on herself, and is unable to recognise the needs of others. This is despite appearances that may seem quite to the contrary.

Her autism spectrum includes Asberger's syndrome, which she acknowledges. "Asbos", as they prefer to be called, lack social awareness and have a poor understanding of others' feelings. They are constantly angry, and develop personal obsessions, about which they deliver interminable lectures. Asbos have difficulty looking people in the eye, but are good at death stares.

If you appointed an asbo as a school milk monitor, you could be certain the result would be angry chaos.

Last week, when I returned from three months' study leave in the Maldives I turned on a television, and I am certain I saw the subject of my study addressing (no, hectoring) the United Nations on climate change. In response to her abuse many delegates beamed, cheered and the delegation from Chad took selfies.

Did I actually see all this? Or should I turn myself in for treatment?

Well spotted, professor. Give your wife your car keys now, and have her drive you to the nearest psychiatric unit. You are clearly delusional. What you describe so graphically is simply not possible - the United Nations may be nuts, but it isn't crazy.

Hey Uncle Norm (via Twitter). Bad people are saying the Noble Pease Prize might go to a nobody like Aussie PM Ardent, or the Swedish brat. Must be FAKE NEWS. I should get prize for the excellent Peace or Suffer the Consequences policy my great nation runs long term. Get it done, buddy! Trump of Trump Tower.

Donald. Why not give your long Mexican fence a better name like The Great Wall of Pease. This may play in Stockholm.