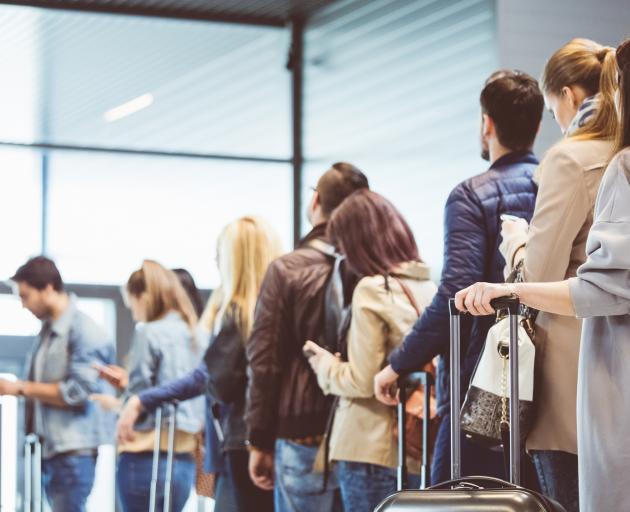 Airports are so appalling that nobody has the heart to invent jokes about them. PHOTO: GETTY IMAGES
I have no special grudge against the Tsars of Honolulu's airport. Their transit camp for travellers is no more nor less humane than most of the penitentiaries through which the airline passenger must pass.

It's true I have history with the joint. Whilst transiting into the Land of the Free there, I've been seized and frog-marched into HNL's interrogation rooms. My offence was not quite grasping the instructions of American immigration officers. (They are trained to speak an unsmiling mixture of Homer Simpson, Colonel Klink and - prove me wrong - medieval Chaucer).

This time it was HNL's fingerprint machine. It seemed to have formed the opinion I was a Mexican, and the Duchess a candidate for the Democrat nomination. Frowning, the rubber gloved officer pressed, squeezed, and re-pressed our recalcitrant digits against a screen, while a computer it linked to in Neverland sat in judgement.

After taking itself a coffee and doughnut break, the computer finally issued its finger verdict - I was a lumpen nonentity, and the Duchess probably wasn't running meth, or for office. We were discharged into the care of Alohaland.

Airports. Bloody airports. The sin of whingeing is allowed when the subject is airports. The reason we don't need to believe in Purgatory, is it has been substituted by the modern airport - a brutalist travel cathedral where souls are punished, while waiting to be dispatched to another place.

If our airports were retitled "cattleyards", animal rightsists would blockade them and protest the inhumane treatment.

Airports are so appalling nobody has the heart to invent jokes about them. I combed the internet and found only two rather sombre airport smiles - airport conditions are terminal, and your case is lost before you sue.

To be fair, the airports are the victims of the success of terrorism. Each year, air travellers pay their security dues to the likes of Al Qaeda via extra expense, huge discomfort, and wasted time. But as you remove your belt, turn in your water bottle, and find your nail scissors confiscated, you realise what a grievous hash has been made of airport security.

Each year, 4.5 billion journeys are flown while the aviation industry generates $4.3 trillion - 3.6% of the world's entire gross product. Forty-nine years after the Palestinian Liberation Army bombed its first airliner, we can now vaporise terrorists via drones and satellite. But, unbelievably, the aviation industry has failed to devise a screening system that passengers just walk through.

On my my most recent journey, one airport's security queue stretched out of the departure area, through the terminal, and 150m down the street.

Much of the airport nightmare is also caused by so many being sold off as private monopolies. (It is no accident that the world's two best airports - Singapore and Hong Kong - are state-owned). An airport monopoly offers enough price-gouging opportunities to make a Doberman salivate.

If you park, you are gouged. Your taxi driver has no choice but pay an extortionate fee to sit on an airport rank. Machines demand money for locked-up baggage trolleys. Airlines trip us up with crazy levies on extra baggage.

And after carry-on bag security, we are discharged into a winding obstacle course of duty-free shops where the only bargains you can trust are cigarettes and booze.

But there are few left whom we can delight with a gift of 200 Peter Stuyvesant. And the liquor companies - devious sods - have invented scores of new super-priced products purely for duty free. You'd have to be certifiable to buy a $500 bottle of scotch at retail - but merely temporarily insane to grab it duty free. The duty-free shops look at the bedraggled armies limping towards them from security, and realise they're easy pickings

Should you be able to afford the airline lounge, it may offer temporary solace. And Air New Zealand now spares you reading newspapers, which have been dumped to (ahem) save the trees.

As Southerners, we make many overseas flights via rushed Auckland Airport connections. At the nation's showpiece airport, the bus shuttle from domestic to international is not constant as is usual, but only quarter-hourly. "No fuss," we're told. "It's a mere 10-minute walk." (!) Like as not in a rush. Dragging your luggage. Rain, shine, and puddles, this trudge is as unsheltered as the tramp down to the cowshed. It is a victory for the concept of minimum service.

I notice my best-performing shares are Auckland Airport, the monopoly about which I complain.

Morally, I should put my money where my mouth is, and sell them. But I won't.

Owning shares in Auckland Airport while also travelling through it, is the only method I know via which you can be screwed and still make a profit.

The Lounge. Quantum of solace in which to whinge.