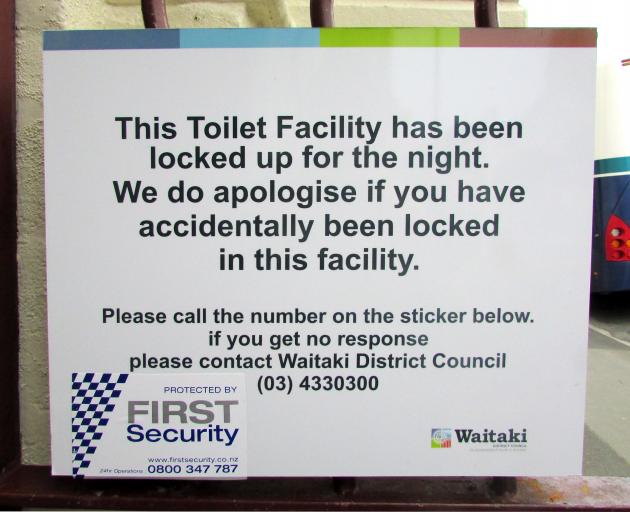 A sign at Oamaru’s Itchen St toilets. Photo: Supplied
You've probably heard that the famous poem See Venice and Die by German writer Herbert Nehrlich has been updated and is now ‘‘See Venice and Drown’’.

But do you really need to squander the kids’ inheritance on a trip to Venice? Or on 10 days trapped on a boat on the Rhine or a visit to Graceland, the home of Elvis Presley, where the ads tell us, ‘‘you can walk through bottom floor with the living room, dining room, guest room, kitchen, the famous jungle room as well as the TV room and the pool table room in the basement’’.

Of course you don’t. You can have a great travel adventure and keep the kids happy by staying much closer to home. A day trip to Oamaru is the way to go. Ah, what a dream of a day. Stooging around Oamaru, especially the old bit. Our recent visit was no exception.

An hour on the Pigroot and then lunch at Fleurs at Moeraki. Bliss! And no pesky foreigners asking you if you’d like to meet their sister. By early afternoon you’re dropping down Holmes Hill into the town that in Victorian times was booming but then stalled, leaving a rich resource of heritage buildings untroubled by the wrecking ball.

Time spent in the historic precinct, avoiding the grotesqueness of the intrusive squash court building and the Steampunk nonsense, is full of pleasures and treasures including fine second-hand bookshops. Round it off with a drink or two at the Criterion and you are ready to meet your driver back on the main street.

It may have been a drink or three because the public toilet in Itchen St catches your eye and is duly patronised. But the dream becomes a nightmare as you leave the toilet. There’s a sign at the entrance which, with the obligatory local body capitalisations, says, ‘‘This Toilet Facility has been locked up for the night.’’ Happily, the lockup had not yet taken place, so I departed, relieved in more ways than one.

But I was haunted by what might have been if the Toilet Facility had been locked while I was inside! The phone numbers on the sign were no use to me. I’ve never owned a mobile phone and never intend to.

The questions tumbled around in my fevered brain. I recalled a Toilet Facility drama of my own. It happened when I first visited Munich in 1974. I entered where a sign said Offentliche Toilette, assuming it meant ‘‘a place to go to the toilet often’’ which is what you do at these beer festivals.

I used the Toilet Facility and left, only to be chased down the street by a plump, aproned murrische alte frau (‘‘grumpy old woman’’, the phrase book told me) screeching and waving wildly. I waved back to acknowledge her friendly gesture but then she caught up with me and rattled off some fairly vitriolic German phrases.

My own fluency in war comic German came in handy.

‘‘Pig dog, Englander! For you the var is over!’’ she seemed to be saying. Bystanders translated, and it seems she was the Toilet Facility caretaker and I’d not thrown her a few coins as is the custom.

I gave her a banknote to calm her down and acknowledge my appreciation to a woman destined to spend her declining years watching men go to the toilet. I also had sympathy for a poor woman who may have just won the World Cup 2-1 but had lost the World Wars 2-nil.

Later, in Oamaru, as calmness returned, I did the research. It seems that Oamaru’s Toilet Facilities are the target of vandals and, while at least one is open 24 hours a day, others are closed at night to deter the morons and oddballs. Indecencies had actually taken place in some Toilet Facilities.

As a responsible local body, the Waitaki District Council has prepared multi-page reports on the Toilet Facilities. At Itchen St the Toilet Facility is a $30,000 investment and needs protection from the vandals of the night. But questions still haunt me.

Has anyone ever been locked in, phoned the number and been released amidst embarrassment and apologies? Who answers the district council phone and releases prisoners? His Worship?

To find the answers may involve the use of the local government Official Information Act or at least a judicious leak.

■ Jim Sullivan is a Patearoa writer. 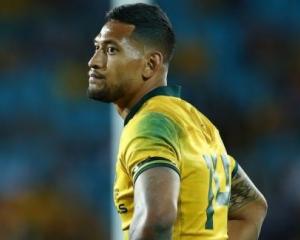