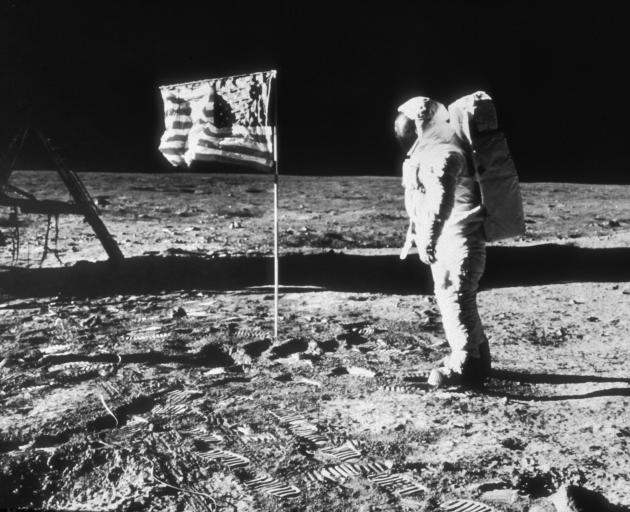 Buzz Aldrin on the moon. Photo: Getty Images
We've been watching young TV reporters ask the wrinkled classes what it meant to them 50 years ago when Neil Armstrong placed the first footprint on the moon. (Armstrong's boot was a size 9 b medium).

Some offered us profundity, others banality. I'd watched that moment too, and if asked what rumination the moon landing provoked, my candid response must be: "I thought of Harry de Horse."

Harry de (surname suppressed - de Horse was his nickname) was a news cameraman I worked with; a shambolic Dutchman possessed with a wondrous ability to stuff things up. If you wanted your news story shot overexposed, shaking, and out of focus, Harry could manage all this without breaking a sweat. He was accident prone (as the clumsy are), awkward, and lacked any sign of the smallest filmic talent.

Yet Harry was cheerful, eager to please, and keen as mustard. In fact Harry de Horse was a hard man to dislike - until he was assigned to a job with you.

And so - 50 years ago I was driving along an Australian bush highway with the radio on, listening as the moon landing unfolded. I hit a small town as the lunar module was about to touch down. To get my dose of history I rushed into the town's appliance shop, where a small crowd had assembled in front of three display televisions, showing the black and white coverage.

We can claim we eye-witnessed history. But the truth is most of the world saw pictures so fuzzed by the 385,000km transmission, it was nigh impossible to know what had happened.

Ditto with the muddled sound.

Armstrong's bootprint was accompanied by his famed pronouncement: "That's one small step for a man; one giant leap for mankind." We knew this only because we were told so by the legendary CBS news anchor, Walter Cronkite. (Sponsored that day by Kellogg's cornflakes).

The digitally enhanced replays you watched last week were light years clearer than the original telecast. But look back at the originals, and you see certain proof the moon mission wasn't (as oddballs claim) a hoax. No hoaxer would have dreamed of backing the fraud up with such poor pictures.

"It surely does," I replied, peering at the fuzzy picture. "What it makes me think is that Harry de Horse has snagged a job at CBS."

I worked with Harry in the early days of television news. Among his more distinguished colleagues were veterans who'd shot the footage for cinema newsreel outfits like Movietone. Some of their ancient equipment had moved with them, including an old-as-the-ark camera called an Auricon. Because Harry rightly stood at the bottom of the pecking order, he'd be given this vintage contraption, if the modern gear was out with the veterans.

Harry de Horse. Where can I begin? I was lumbered with Harry for an interview with Australia's Deputy Prime Minister, a dairy farmer called Doug Anthony.

Making himself comfortable on the interview couch. the Deputy PM suddenly found himself whacked on the nose by Harry.

How so? The ancient cine camera couldn't be focused through its lens so, to ensure a clear picture, the cameraman ran out a tape measure to check how many inches to the subject's face. Only Harry could make this process end with his finger up the interviewee's nose.

The Deputy PM was a good sport, so he made little fuss. However, midway through the interview Anthony, a serious man, paused in the middle of his rural production statistics, and did something not previously witnessed. He began to giggle.

I looked over my shoulder and found Harry had assembled the Auricon incorrectly. Its lens had fallen off the front of the camera and clattered to the floor. De Horse, beaming, was trying to jam the lens back into its mount, with the film still rolling.

My problem was it wasn't only Harry's credibility which had been shredded. This bloke was the sort of fellow that destiny had decreed would fart when least required. (An interview with an alderwoman). One could write a book called: "Sinking with Harry - the Living Catastrophe."

I've no idea where Harry de Horse ended up. Maybe he, too, watched the moon landing and thought: "Gawd, I could do better pictures than Nasa."

The sad thing is he may be correct. A generation of us claim to have witnessed man first walk upon the moon. But we are fibbing. The truth is we peered into our tellies as history unfolded - and hadn't the foggiest what we were seeing.

-John Lapsley is an Arrowtown writer.