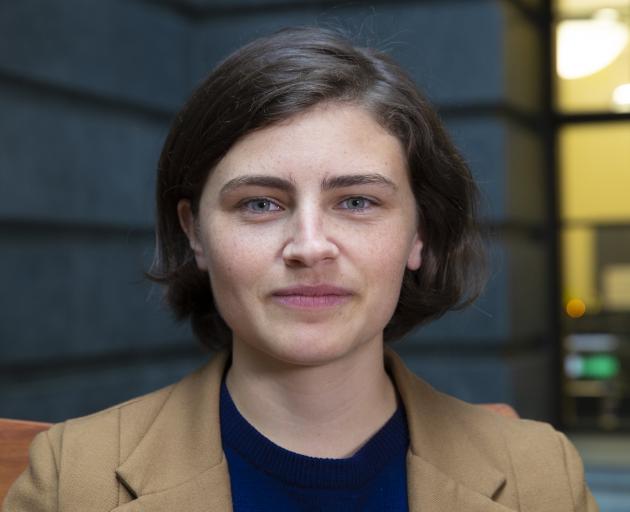 Chloe Swarbrick is one of Parliament’s most talented communicators. PHOTO: APNZ
The phrase wasn't brand new. So when Chloe Swarbrick casually flicked her "OK Boomer" insult across the aisle to National MP Todd Muller, she hadn't a clue she'd just turned it into the International Meme of the Year.

We've now read about it ad nauseum. This is because it was an accidental perfect storm. The young Green threw a perfect phrase into the perfect place, with perfect casual contempt for her elders. And her "OK Boomer" put-down, perfect for the times, became the perfect soundbite seized by everyone from NBC and CBS, to ITV and the BBC.

It gave a universe of shock jocks and columnists (who, me?) a fresh excuse to huff and puff about the dastardly deeds of the other generations. Selfish Boomers, versus snowflake Millennials, or entitled Generation Xers, pick your target.

But why was "OK Boomer" so perfectly on the money? I've scratched my head, and must opine that I'm damned if I can tell you. It just is. The moment I heard Ms Swarbrick's snipe, I knew in my gut that she'd smacked a towering home run for the cause of making ageism the new normal. (No matter the piddling detail that Muller, a bustling 51, is Generation X).

While "OK Boomer" is hardly Churchillian, it happens that Swarbrick is a pollie who is quickly earning her speaking stripes. At 25 she is the baby of the House, but its most talented communicator. She is lucid, penetrating, and while you may totally disagree with her, two minutes of Swarbrick on drug law reform, will find you nodding your head and considering the case that marijuana will make the lame walk, end measles, and sooth the mind of Prince Harry.

Wit's End is guilty of being born a boomer. I also plead to charges of being male, white, and straight, save for somewhat crooked teeth. Others bear equal guilt for being birthed redhead, Tibetan, Presbyterian, geniuses, or dunces. It's regrettable, but even if you're Mark Richardson, the building blocks of who we are sit beyond our control.

Today's rules are that we may not criticise, or even think dark thoughts about people because of their race, sex, or creed particularly, if they're idiots. We can, however, pile into anyone for their date of birth. (You'll soon be told that a year like 1952 is "inappropriate".)

Boomers well understood there were too many other kids crowded into the classroom, just as we knew The Beatles belonged to us, and not our parents. But we hadn't the foggiest we were "boomers".

There was no such word until January 23, 1970 when, according to the Oxford English Dictionary, "boomers" was first used in The Washington Post.

"Boomers", rhymes with "bloomers". Before 1970 there'd been "younger" and "older" generations who cordially detested each other, but there'd been no attempt to fit out an age grouping with any generational title.

Categorising generations has become another tool for dividing society against itself.

The American-based Pew Research Institute has led the academic categorising of the generations.

If you're grizzled enough to remember World War 1 veterans marching on Anzac Day, you have witnessed the foibles of no less than seven neatly labelled generations. Pew codified them as follows:

The Lost Generation born between 1883 and 1900, so called because its males disappeared into the maws of World War 1, leaving an oversupply of widows and maiden aunts.

Thus fewer children were born into the next grouping - Pew's Greatest Generation (born 1901 to 1927). They starved through the Great Depression, yet still felt a moral duty to serve on the World War 2 battlefields. Their "greatest" plaudit is deserved.

Then, The Silent Generation, born 1928 to 1945, so called because politicians began talking about "the silent majority" around the same time as the McCarthy Red Scare '50s.

These were times when it was sound policy to keep your mouth buttoned.

This "Silent" crowd is made to seem very grey indeed, but the definition ignores the truth that the word "teenagers" was invented to describe the insouciant older children it included. Silents invented Teddy Boys, bodgies, bikies, Elvis Presley, Chuck Berry, and rock'n'roll. Their era discovered the pimple-shrinking excellence of Valderma Balm. (No longer manufactured, thanks to EU regulations).

Financially, the Silents did very well thank you, and somehow escaped the finger-pointing that came to the Boomers. Being born 1946 to 1964 categorises you as one of the Boomer "Me" generation. We're followed of course by the future's old fogeys Generation X (aged 39-54), Millennials (22-38), and Generation Z (under 22).

John Lapsley is an Arrowtown writer.

"What comes after Z? Since Z takes us to the end of the alphabet"
We will all be dead, the planet will be dead, at least that is what the climate change alarmists want you to believe.

No, they'll work on the problem.