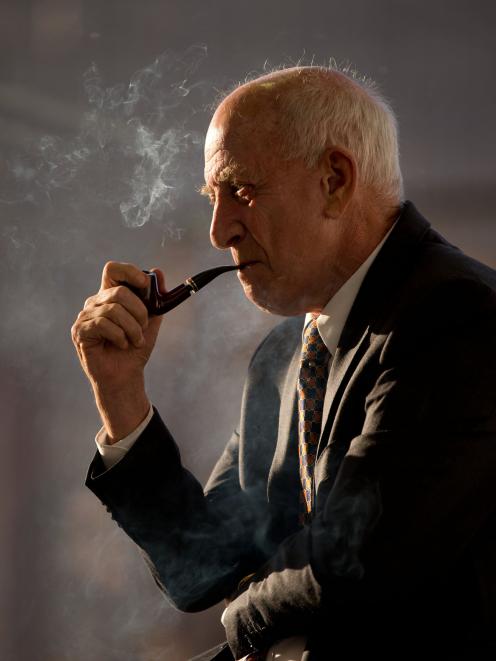 Sir Bob Jones claims studying history was one of the best things he has done. PHOTO: NEW ZEALAND HERALD
I recently raged about the bonkers wastefulness of an Australian University that offered a doctoral course on making symphony orchestras safer places, writes John Lapsley.

Doubtless the symphony presents workplace dangers. The bassoonist could lean in front of the trombone and be hospitalised by a jutting E flat. First violin may be murdered by a cuckolded second. The Steinway is not earthquake certified, and the trumpeter perhaps blows wind unfelicitously. It goes on.

But I was throwing bricks inside a glass house. If I'm honest the reasons I went to university myself were equally pointless. The only reason I turned up to Orientation Week as an arts fresher, was I had absolutely no idea what else to do.

My family was thick with schoolteachers and people of the cloth. So I hadn't a clue how commerce worked, and knew little about occupations beyond that of newspaper boy and stamp collector. I quite liked the thought of being a professional cricketer, or failing that, a pop star. (My Jansen would need a larger amplifier).

So, basically clueless, I signed up for a bonded teachers' scholarship. No matter that I disliked school, and didn't much fancy teaching. At least I knew what happened in a classroom, and teachers had generous holidays. I couldn't comprehend a world where people existed on only two weeks of annual leave. (OK, this wasn't five years ago).

I enrolled in subjects like English, history, and geography not because I was thirsty for knowledge, but because that was what I did at school.

Your columnist was going nowhere. I studied on aimlessly, but then I got lucky. It happened that the history department at Auckland University, led by the famed Keith Sinclair, had a quite brilliant staff. For me, the "what's this all about?" penny dropped - no it fell into the slot machine with a clamorous clunk - when during a tutorial, one of the lecturers explained how he would mark our papers.

Nicholas Tarling informed us he'd give basic passes for regurgitating our lectures correctly. But to score good marks, we must reveal insight and better still, show some writing ability. He wanted flair and panache. The thought was that a historian should think and provoke, while showing the literary types over in the English department how to write.

At last this had some point. History wasn't just learning what happened, it also involved what I (teenage me) might make of it. It might be fun.

Around the same time I discovered the Private Bar of the Grand Hotel, a retreat whose patronage was almost entirely under age, and offered a side window (for use of) during police raids. I got a duffel coat, bred a scrofulous beard, affected a pipe, and pretended to find meaning in jazz. Friends ran a student newspaper, which began publishing my deep knowledge of life.

If I'd had a passport, my profession would have been listed as "Poseur".

I laugh now, but the truth is "poseur" was a vast improvement on the kid who'd arrived in Year One. I now had the confidence to fall flat on my face. Worse, I could get up with a lesson only barely learned, have a wee think, and do it all again. And that, my friends, is an enduring asset, because the odds are that eventually we start getting some of it right.

So we should look at this city's more bumptious students - good God, they may even write for Critic - and allow that like as not, they're on the right track. The beatitudes of Matthew's gospel should have included: "Blessed are the cocksure".

I recently met another history graduate. At the Arrowtown Spring Arts Festival (bigger than you'd think) I had the job of doing the on-stage interview with Sir Bob Jones, richlister, writer, and columnist. Love him or hate him - there's little ground in between - we were on the right subject with "Satire - The Art of Taking the Mickey."

The "house full" sign went up on Sir Bob a week early and an audience, half of which possibly disagreed with everything he said, absolutely loved the process. The patrons understood there is little that is as entertaining as being forthrightly insulted with wit and style.

Sir Bob, who spends the greater part of his time reading, writing, and travelling, says he's not actually a businessman. (I don't know another billionaire columnist, so I'll take that with a bushel of salt).

Moreover, Sir Bob didn't give tuppence for commerce graduates and MBAs, and one of the best things he'd done for his career was take history.

Hello. I recently stumbled across a theory on when music began to die. I've a morbid fascination with falling empires: why did Rome fall? Wondered if anyone else had heard it.

The author proposed the fall began with Wagner (who was buddies with Nietzsche) and his injection of his personal sexual revolution into music. Tannhauser 1845 is his attempt to destroy the morality of Christianity. Then, the proponents of the twelve-tone system (Hauer and Schonberg) 1920 tried to nail stakes in the heart of music. Mortally wounded the ship floundered and sank under the American assault like the concert-goers went down under the batons of the Hell's Angels at the Rolling Stone concert in Altamont. "Disordered music leads to disordered lives." Music is upstream of culture. Culture is upstream of politics. Check out Kanye's newest album.