Case for 'real love' as a decider 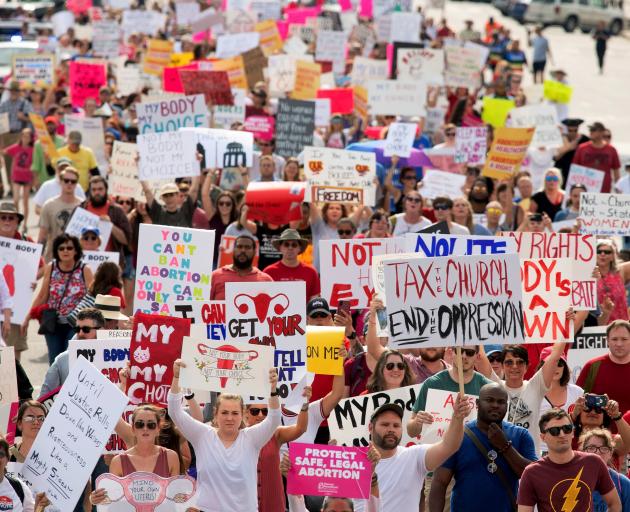 People march to the Alabama State Capitol in May in protest against the state's new abortion law, the Alabama Human Life Protection Act. PHOTO: REUTERS
Abolishing abortion is a worthy moral goal, says Ian Harris. The question is how to get there.

For most women, the prospect of a baby is a joy and delight. For others it's an unwelcome dilemma: should they go ahead and give birth, or abort the pregnancy?

This is one of those highly charged moral questions where there's scarcely any middle ground. Abortion is tantamount to murder, says one group. It's for the woman to decide for herself, says another.

As the Government mulls over legislation to take abortion out of the Crimes Act and remove the procedural obstacles women face at present, it's worth registering that this isn't a matter of easy-osey permissiveness versus godly virtue. There's morality in both camps - but two very different approaches to morality are in play.

It seems reasonable, first, to acknowledge that any abortion marks a failure, in the sense that no-one sets out intending that as the outcome. An unwanted pregnancy may stem from a range of factors - all the way from contraceptive failure or misjudging the woman's "safe period" to sexual adventuring, yielding to advances after being plied with alcohol, incest and rape.

One response is to invoke the moral absolute that killing anything human, including a foetus, is always wrong and the state should prohibit it (except in war, of course, when it's encouraged). Nature itself does not observe that rule. Around 80% of conceptions don't result in a live birth (70% of fertilised eggs die within six days), and miscarriages outnumber induced abortions by a large margin.

Even the Catholic Church once left more uncertainty around the developing foetus than it does today, as is evident from two of its most influential theologians. The 5th-century Bishop Augustine considered the soul (itself a dubious theological concept) entered the foetus only after 40 days for males - and 80 days for females! The 13th century's Thomas Aquinas agreed. Today their church holds the view that ensoulment occurs at the moment of conception.

That was the position taken in 2009 by a Brazilian archbishop who objected to abortion for a 9-year-old girl bearing twins after being raped repeatedly by her stepfather. The abortion was more serious than the rape, he said, and excommunicated the girl's mother and the doctors involved. Brazil's Council of Bishops later found that too harsh and rescinded the decision. They had subjected the moral absolute to an ethical critique.

The alternative response flows from the morality of free and responsible choice. Instead of applying an inflexible rule from without, it focuses on the woman who must choose one way or the other and asks: "What does a love that respects persons, senses their need and nurtures their wellbeing require here?" The answer will then vary from situation to situation.

That doesn't mean the decision should be taken in a social, legal and ethical vacuum. Fifty years ago, English bishop John Robinson proposed four steps towards creating an environment where women could come to it freely, responsibly, after due consideration - and therefore morally.

First, he said, take abortion out of the Crimes Act. Criminal sanctions carry overtones of illegality, fear and guilt. In former times these could perhaps be justified on the basis that unsafe (and furtive) practices posed real threats to life and health. Medical advances have changed that: accessibility is rather the issue. Relevant also is that most abortions are sought by women who already have a child or children and think it would be irresponsible to have more.

Second, make unwanted pregnancies less likely by maximising knowledge of all the options, including contraception and non-invasive means of termination. "Real love," says Robinson, "can only desire people to be as truly free as they possibly can be - not to have what should be their moral decision taken for them by others."

Third, recognise that the role of the law should be to safeguard that decision by ensuring it is as informed and well-considered as everyone involved can make it. This includes making sure that the woman is not acting out of panic or alarm, protecting her from pressure, advising of options, and then supporting her fully in whatever she decides - which may be to abort, or to have the baby after all.

And the longer-term goal, Robinson urges, must be to make abortions unnecessary, abolishing them not by prohibition but through maximising knowledge, responsibility and choice. Every child born will then be one who is truly wanted and has the best possible start in life.

A counsel of perfection? Maybe. But it's a worthy ideal, and morally the way to go.