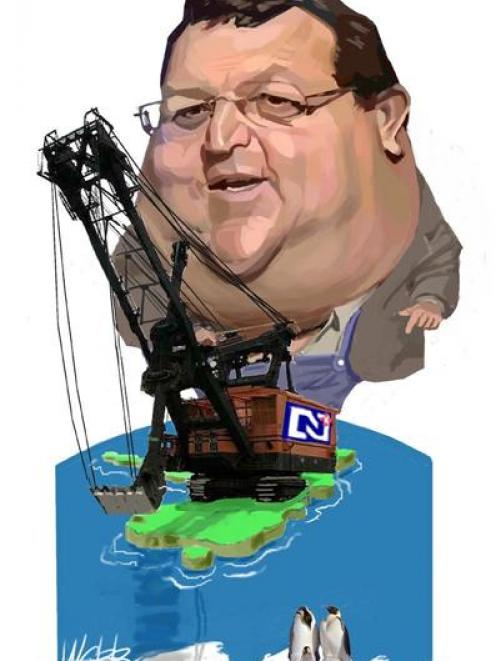 Gerry Brownlee
For Minister of Energy and Resources Gerry Brownlee, the countryside appears to be something like a fruitcake.

He wants to preserve it, while at the same time picking the cherries, the sultanas and the almonds from its interior.

He intends to do this by "surgical" mining - I'm sure I'm not the first to point out that the term sounds suspiciously oxymoronic.

Be that as it may, in the context of the row over actual mining of sectors of hitherto protected parts of the conservation estate, the image is conjured of some sort of surgical keyhole device sliding unobtrusively down into the bowels of the earth, observing, prospecting, alighting here and there to inspect strange lumps.

Bit like a colonoscopy really, except rather than excising obstructive matter from the interior, the endoscopic device collects gems and nuggets of precious metal as it goes, then withdraws with its valuable haul, barely a scar to show where the incision occurred.

The term is used, one suspects, to distinguish open-cast mining - of the kind that uncovers and disfigures considerable acreages of land - from underground mines.

These latter can be operated, so it is said, with minimal effect on the environment, particularly if one discounts the roads that must be pushed through pristine interiors to provide access and to carry out the bounty; and disposal of the tailings, the waste material left once whatever that is "valuable" has been removed.

Such niceties are being debated once again, because last August Mr Brownlee announced he had directed Crown Minerals to review areas with significant mineral potential held in the estate.

The minister estimated that New Zealand has an in-ground mineral potential value of up to $140 billion but about 70% of that is on Department of Conservation land and about a third of it protected from mining by schedule 4 of the Crown Minerals Act.

Then, just over a week ago, Mr Brownlee and Minister of Conservation Kate Wilkinson announced a proposal to remove 7058ha of land from schedule 4 protection - areas formerly considered so worthy of protecting that mining on it was completely outlawed.

At present, the total area of New Zealand under mining operations amounts to around 4000ha.

Notwithstanding Mr Brownlee's subsequent suggestion that only a fraction of the released schedule 4 land would in fact be mined, it does represent a potential almost 200% increase in total area.

The land singled out is on Great Barrier Island, the Coromandel Peninsula, Papamoa National Park on the West Coast and Stewart Island.

Some of the opposition to the proposal represents simply a default position, one that resolutely holds any despoliation of the natural environment is unwelcome, whatever the potential other benefits.

However, there are more measured arguments, holding that the value of New Zealand's "clean, green" image and the preservation of its vast natural forests and national parks, are in the long term so much more valuable to the country than the profits of a few mining enterprises; further, that the royalties from such operations generally amount to only a very small fraction of the value extracted by usually foreign-owned mining companies.

On top of that there are, of course, the company taxes, the employment and the general stimulus to local or regional economies in which the activity occurs.

There could well be a case to be made for intensive mining, even of some areas formerly held to be of the highest conservation value.

But if that's true, perhaps the Government would be better off to stop pussyfooting around with weasel words and just be upfront about it.

Let's have the debate.

Isolate the prospective areas, stipulate the assessed mineral deposits, qualify what sort of mining and the scale of the returns expected from them, and identify the potential environmental downsides - honestly.

At the moment, the argument is being positioned in the vaguest generalities amid a vacuum of genuine information.

No wonder the proposals are attracting adverse attention.

Mr Brownlee appears to wants to have his fruitcake and eat it, too.

• Simon Cunliffe is assistant editor at the Otago Daily Times.