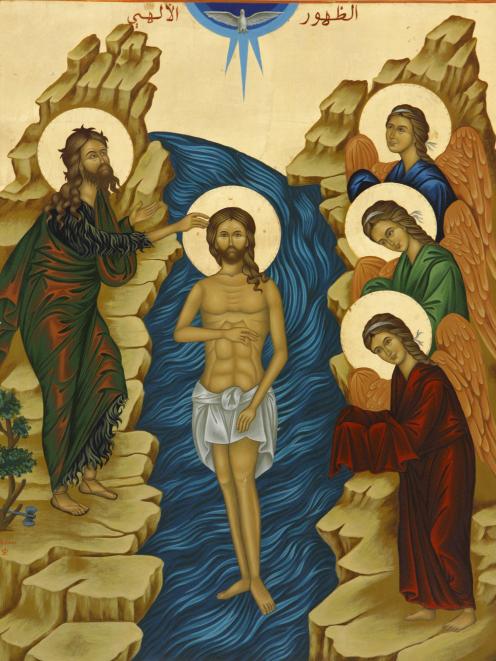 Getty Images
What does the Christmas story have to do with the climate crisis? The biblical character of John the Baptiser holds the key, writes Graham Redding.

December is the month where Christmas pageants and nativity scenes abound, and various biblical figures like Mary and Joseph, angels, shepherds, magi, an innkeeper and, of course, a baby Jesus make their annual appearance.

As a kids-friendly way of engaging with the story of Jesus’ birth, they’re hard to beat. I’ve yet to see a Christmas pageant that doesn’t score highly on the cute scale.

But cute isn’t enough. Not when our world faces such perilous threats as climate change. I want a dose of realism. And I want to know how the age-old Christmas story speaks into those sorts of situations.

For me, the biblical character who gives Christmas that dose of realism is a man who appears in all four gospels as a forerunner to Jesus but, because of a Grinch-like shadow he casts over the Advent season, he seldom makes it into a Christmas pageant: the abrasive, locust-eating, camel hair-wearing, desert dweller, John the Baptiser. As poet John Shea puts it, ‘‘Jesus came out of John as surely as he came out of Mary. John was the desert soil in which the flower of Jesus grew.’’

The desert occupies a special place in biblical spirituality.

According to British author Kenneth Leech, the desert tradition, or desert spirituality, comprised a twofold movement of protest and purification: protest against corruption, abuse of power and protection of privilege; and purification of the soul through the renunciation of material possessions and physical pleasures, and the adoption of spiritual practices, including prayer and fasting.

Thomas Merton, a 20th-century American Trappist monk, and a prolific author on matters of spirituality and social justice, was deeply influenced by his reading of ancient desert dwellers who, like John, took the road less travelled. It was Merton, more than any other writer of his generation, who coined the phrase ‘‘desert spirituality’’.

Merton’s desert spirituality was, in large measure, a protest against the immense wasteland which he believed Western civilisation was becoming. He lamented mindless conventionalism, busyness and diversion, a retreat into settled routines that no longer nourish the human spirit.

He also lamented the exploitation and degradation of natural habitats that saw large tracts of wilderness swallowed up by soulless urban sprawl.

Merton’s spirituality saw in the desert the possibility of solitude, meditation and, through the adoption of a different way of being, ultimately recovery from destruction and devastation.

Contemplation in a world of action was the apt title of one of Merton’s books as he applied the concept of desert spirituality to urban living. It depicted solitude and contemplation as pathways to transformation and, interestingly, to a deeper experience of community. Embrace solitude not to escape other people but in order to find other people in God, Merton said. It is as you withdraw that you will be able to listen more intently to the world’s deepest and most neglected voices that proceed from its inner depths.

The creative and mysterious inner self, Merton added, must be delivered from the wasteful, hedonistic and destructive ego that works to cover itself with disguises.

For Merton, Descartes’ famous dictum, cogito, ergo sum, ‘‘I think therefore I am’’, was a declaration not of enlightened being, but of alienated being, in exile from its own spiritual depths.

As the present climate crisis intensifies and the international resolve that is needed to deal with it falls so woefully short, I find myself reflecting often on the desert theme.

A United Nations report warns that the consequences of the climate crisis, including rising seas, intense heat and ecosystem collapse, will fundamentally reshape life on Earth in the coming decades even if fossil fuel emissions are curbed.

As we face the prospect of the uninhabitable areas of Earth’s surface expanding, we might find that we need not just a desert spirituality (a spirituality grounded in the desert, where the desert is a chosen destination, a place of formation) but a spirituality for the desert (a spirituality that equips us for survival in an age of widespread ecosystem collapse).

As we prepare for that possibility, there is much to commend the example and wisdom of the desert saints, including John the Baptiser, whose call to live simply and to act justly towards the dispossessed has abiding relevance, especially as we feel the need to reduce consumption and to live more sustainably.

John’s message was all about preparation for a new epoch. ‘‘Bear fruit worthy of repentance!’’ he declared.

For John, change begins with repentance. His call to repent echoes down through the centuries.

So, too, his cry of affirmation when he sees the one who was born in a manger and who is the ongoing subject of Christmas devotion, coming towards him: ‘‘Behold the Lamb of God, who takes away the sin of the world!’’

- The Very Rev Dr Graham Redding is a lecturer in chaplaincy studies at the University of Otago and a former moderator of the Presbyterian Church of Aotearoa New Zealand.