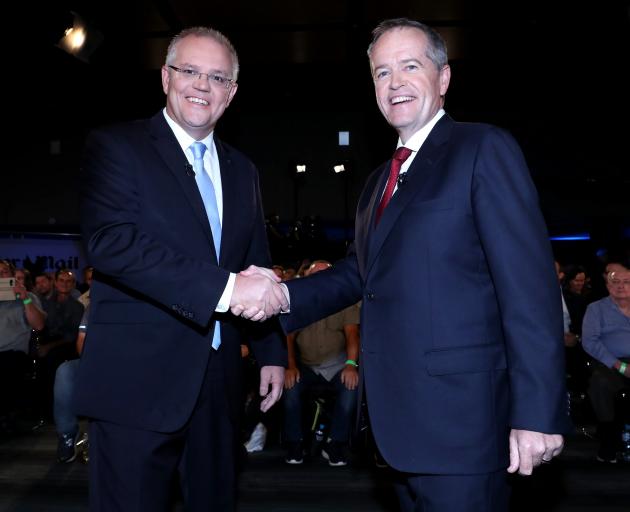 Australian PM Scott Morrison (left) and Opposition Leader Bill Shorten have failed to capture the hearts of a disengaged public. Photo: Getty Images
A remarkably high number of voters in Australia do not know the name of the Prime Minister or the leader of the Australian Labor Party. Yet, Australia's federal election is tomorrow.

The nation's voters are disengaged and apathetic. Most struggle with the details of politics at the best of times. But when Australia has had six prime ministers since 2007 and is on its third Coalition prime minister in the past few years, it is little wonder voters lose track.

While Mr Morrison, a former marketing executive and a Pentecostal Christian, has made a mark as someone willing to appear decisive, for many he remains an enigma, even a chameleon. His position on climate change, like that of the Coalition itself, for example, has been unclear.

Mr Morrison has campaigned on the traditional centre-right claim that Labor is bad for the economy. He has had to deal with the departures of several prominent coalition moderates. The campaign focus has been on him, not the party and its ministers.

Labor has consistently led in the polls, and, to Mr Morrison's electoral credit - given the disruption and factional fighting within his party - the polling gap has narrowed to only a few percentage points.

In contrast, Labor has stressed its team. The party knows Bill Shorten has come across as wooden and that he fails to engender voter trust. He is blamed for his part in the overthrow of two previous Labor leaders and he comes from a union and party background. Mr Morrison, ScoMo as he is sometimes known, tends to relate more easily to voters.

Nevertheless, Mr Shorten has moved up in preferred prime minister polls to be not far behind Mr Morrison. He also says he has learned from the experience of six years as Opposition leader.

Despite the closed gap in the polls, Labor, and Mr Shorten have been on the front foot more in this the last week before the election. And he is widely expected to lead in the poll that matters. Given the increasing numbers of independents and the number of smaller parties, however, he is likely to need support to govern.

Labor might have to battle to pass measures through the Senate, as well. Half of the Senate seats are being contested this election.

Australia elects members of Parliament via electorate seats, but also with preference votes. Just where voters who favour first the various small parties and the independents give their preferences becomes important.

Labor is campaigning on minimum wage rises, more health spending, emission targets and a free child-care package. Some of the money is to come from cutting some tax exemptions. Labor has had to match a Coalition policy for first-home buyers and claims larger fiscal surpluses than the Coalition will manage.

Its main planks are the promise of tax cuts - Mr Morrison brought forward a budget to outline this - and huge infrastructure spending. He continues to argue the Coalition will manage the economy better. As one Australian news outlet put it, Australia cannot afford a reckless pursuit of utopia.

Sadly, trust and engagement have gone walkabout. Interest has faded so much that the televised leader debates, once popular on prime time, were relegated to secondary channels and attracted mediocre audiences.

Sadly, this apathy is despite the differences between the two main parties, differences that will make a difference to Australia's future; on one side more activist and social spending policies and on the other a more traditional centre-right approach. But even the likes of Labor's $A4billion spending on child-care subsidies over four years seems to have failed to achieve cut through with voters.