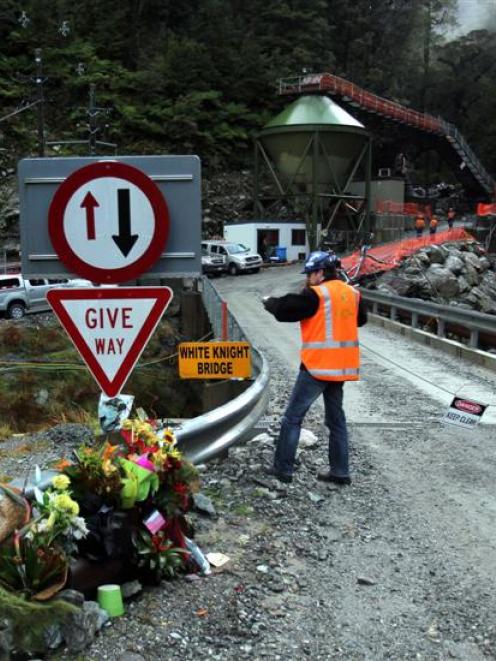 Mines Rescue enter the Pike River Mine for the first time since the mine explosions. Photo by Iain McGregor/The Press.
It was impossible not to be moved by the harrowing victim impact statements read during Pike River Coal Ltd's sentencing hearing in the Greymouth District Court this week.

Almost three years on, the emotional trauma of the families bereaved by the November 19, 2010 coal mine explosions which killed 29 men remains palpable. Their grief and despair, and reports of the difficulties faced by many in their day-to-day lives, was hard to hear - clearly even for Judge Jane Farish. Their belief that Pike River Coal has not taken full responsibility for the tragedy was obvious, as was their frustration and anger.

Kath Monk, supported by husband Bernie and daughter Olivia, called the loss of their son Michael a ''shattering experience'' and said they ''lived a nightmare''. Sam Mackie's mother Beth said of the loss of her only child: ''My life is a horror movie''. Allan Dixon's partner Robin Henna said: ''Anger is part of my life. I don't trust anything any more.''

Tammie O'Neill said of her late husband Peter: ''I have difficulty sleeping ... wondering what he was thinking, did he suffer, and what went wrong.''

Kane Nieper's wife Chloe's statement read: ''Kalani [Kane's son] asks about Daddy every single day. He says Daddy is up in the sky on his surfboard - it's ripped our hearts out.''

They and others talked or wrote about health problems, sleeping problems, uncontrollable crying, reliance on medication or hospitalisations, and difficulties doing their jobs and holding their households together. And they spoke of the safety concerns held by their men in the days and weeks leading up to the accident.

Judge Farish yesterday ordered reparation of $3.41 million be paid - $110,000 for each of the 29 victims and the two survivors - and fined the company $760,000 on the nine charges laid by the former Department of Labour (assumed by the Ministry of Business, Innovation and Employment) under the Health and Safety in Employment Act. The company was found guilty on the charges in April.

Judge Farish said she was satisfied there was the means for reparation to be paid, although it remains uncertain how that can be the case with the company in receivership, creditors first in the queue for other funds and apparently only $500,000 available to pay to families from the company's $2 million liability insurance cover, an amount slammed as woefully inadequate.

Judge Farish will have voiced the feelings of many with her reported comment ''it seems morally unjust that this company, within months of this incident occurring, can shut up shop without doing anything to provide for these men's families''. It should be noted Pike River and majority shareholder New Zealand Oil and Gas did contribute $1 million to funds set up for the benefit of the families and provided other support. But already there have been calls for NZOG or the Government to pay the compensation, for legislative change that would put families at the front of the compensation queue and enable directors to be pursued for compensation if their company cannot pay in cases of negligence, and even for a corporate manslaughter law.

The sentence may bring to a close another chapter in the journey for these families, but it is by no means the end of the story. The process involved in receiving any payment may not be straightforward, the trial of former Pike River Coal chief executive Peter Whittall is scheduled to start in Wellington next year, some may be involved in making submissions on or following the progress of the the Health and Safety (Pike River Implementation) Bill as it passes through Parliament aiming to implement the recommendations of the Royal Commission on the Pike River Coal Mine tragedy, and of course there is the ongoing fight to ''bring home'' the Pike River 29.

Presenting her victim impact statement on Thursday, Anna Osborne broke down when talking about trying to bring home the remains of her husband, Milton: ''I so desperately need closure.''

Sadly, there is more yet for the families to endure in an ongoing tragedy that Ministry of Business Innovation and Employment lawyer Mark Zarifeh has labelled the ''employer-related disaster of a generation''.