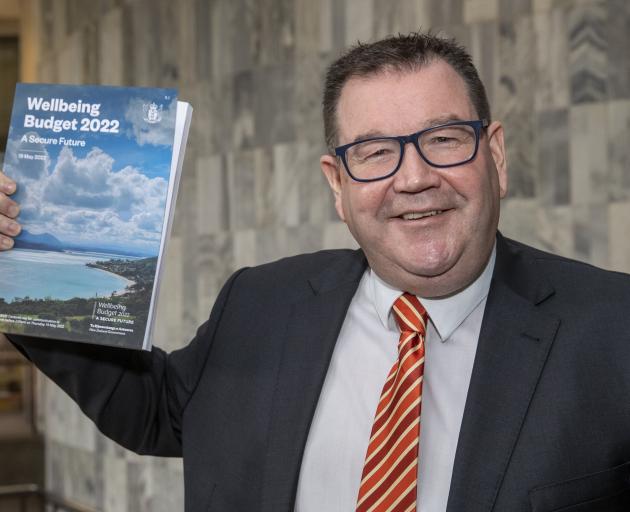 Finance Minister Grant Robertson with a copy of his Wellbeing Budget 2022 at Parliament, Wellington. 17 May, 2022. PHOTO: NZ Herald / Mark Mitchell
Finance Minister Grant Robertson favoured the word balance in the lead up to yesterday’s Budget. Clearly, he was not going to satisfy the range of demands from Labour supporters, let alone everyone else.

The frame of balance allowed him at least to endeavour to offset criticisms that the Government is overspending, underspending, ignoring this problem or underplaying that one. It means he can try to appeal to middle New Zealand.

Seeking balance is especially tricky this year. Inflation has taken hold after the post-Covid financial stimulus around the world and New Zealand. Spending too much will aggravate inflation on top of supply chain issues, China lockdowns and Russia’s invasion of Ukraine.

In hindsight, a smaller Covid monetary impetus would have been helpful. Even without hindsight, the Reserve Bank’s inflation focus was muddied by other guidelines and it reacted to changing circumstances too slowly.

The Budget, as it happens, has been delivered on a day the United States sharemarket fell sharply. The New Zealand sharemarket has also been dropping.

Unexpectedly, the KiwiSaver balances of New Zealanders have fallen as have the Sharesies or Hatch accounts. Those who this year ventured into cryptocurrencies are ruing that decision.

New Zealanders, at least for now, are poorer and more concerned about their financial future. It is true, as National says, that people are going "backwards". How much can be pinned on the Government is what is in question.

All this makes Mr Robertson’s and Treasury’s prognostications more uncertain than usual. Are confidence, house prices and spending going to dive? Will we be heading for a recession? Is such an outcome necessary to root out an inflation spiral or the evils of "stagflation"? Or will gloomy predictions be confounded as they were after Covid?

Is Treasury correct that inflation, while higher than earlier predicted, will steadily slide downwards and that unemployment will fall below 3%?

It is against this background that Mr Roberston’s Budget needed to be about balance. He is walking tightropes. He is playing what he sees in front of him while ignoring worst-case futures.

He is going only so far with spending, although with notable exceptions of billions on health. He is maintaining prudence where he can. He edges forward, for example, with first home-buyer support, while the numbers affected remain relatively small.

He includes the obligatory Budget-day surprise — $814 million on the one-off $350 grants for individuals earning less than $70,000. Wage-earners without children finally receive some of their taxes back.

Again, Mr Roberston is being cautious. A one-off amount is not built into ongoing costs and the amount is limited so he does not appear profligate and to be boosting inflation.

His goal is to give the impression the Government cares about the "cost-of-living" crisis and to, at least, give something to what National has labelled the "squeezed middle".

The tax-take is well up as bracket creep, more efficient government IT systems, the big increases in minimum wages and high employment all provide a boost. Inflation means more GST paid, and private purchasing has been vigorous.

Meanwhile, the Government will continue to frustrate those seeking the "transformational" regime they were told to expect.

Simultaneously, the growth in spending and bureaucracy creates fertile ground for criticism from the right.

Mr Robertson emphasised "balance" again at the end of his Budget speech yesterday. He also has another Budget to deliver before next year’s election where he will be able to step up Government’s response to the "squeezed middle".

It will be fascinating to see how these people, those who ultimately decide most elections, react to Mr Roberston’s "balance", and his credibility as this country’s economic manager.