Budget 2022 is not the Budget many people needed, but it is perhaps the Budget the country needed to have.

With inflation driving the price of staples ever higher and wages struggling to keep up, many households were hoping Finance Minister Grant Robertson had their well-being foremost in his mind for this latest episode in the "Well-being Budget" series.

Many economic commentators, on the other hand, were just as hopeful Mr Robertson would not spend the $6billion he had recklessly, further fuelling the rise of inflation.

On that score, he delivered.

The only profligate thing in the Budget was overuse of words like "prudent", "careful" and "balanced".

The overall title of the Budget — "A Secure Future" — emphasised the steady-as-she-goes, no-need-to-panic pragmatism with which Mr Robertson hoped to ease the tensions of jittery financial markets.

After two crisis-driven pandemic Budgets, this, Mr Robertson sincerely hoped, would be a "business as normal" Budget. 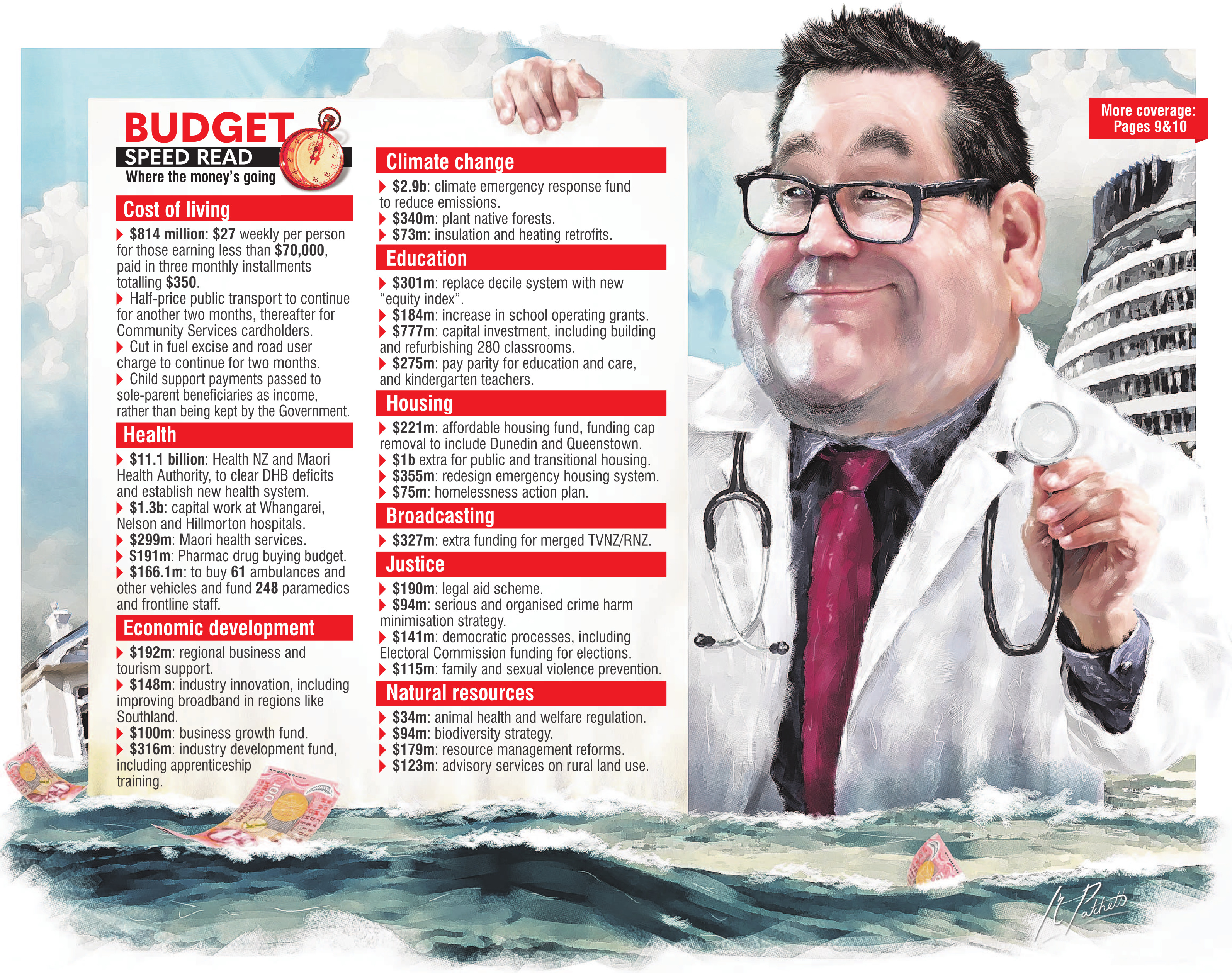 Covid-19 response was neatly tucked away back in the health estimates rather than being front and centre.

While not trying to frighten the horses, Mr Robertson has offered a few carrots, such as one-off cost of living payments and short-lived extensions of funding to cut petrol costs and fares on public transport.

The key to these handouts is that while they are big-ticket costs, they are also intentionally for the short term and should quickly filter back in to the economy in a way which Mr Robertson anticipates will not be inflationary.

While an estimated 80% of adults will receive the temporary cost of living allowance, it comes in the form of $27 a week, paid out in three instalments in August, September and October.

While no-one eligible is going to say no to the money, that monthly stipend will probably not cover the cost of filling the average family car, even considering that the earlier temporary reduction in fuel excise will continue for another two months.

Yes, other assistance had been given already through tax measures announced pre-Budget, but families doing it hard right now may well be left asking, "Is that all?".

But the short time frame given for those relief measures underscores the one big assumption in Budget 2022: that the tide of inflation is at its peak and will shortly retreat.

The latest fiscal projections suggest that wage growth will once more be in advance of inflation in the not too distant future, and Mr Robertson is counting on that indeed coming to pass, negating the need for any further short-term measures and restoring the full fuel excise back to the Government’s books.

As anticipated, the big spending area in Budget 2022 is in health.

Here the public are also entitled to ask, "What is in it for me?".

Talk of improving the efficiency of the health system is all very well, and it is something that definitely needed to happen given the imminent demise of DHBs.

But taxpayers want, and are entitled to see, more hip replacements and cancer treatments rather than a streamlined bureaucracy and an improved procurement process, important though both those things will be to the success or otherwise of the imminent health reforms.

That said, there is one clear area of improvement, the extra $191million added to the Pharmac medicines-buying budget for the next two years.

The drug-buying agency is already proposing that it will spend the money on cancer and multiple sclerosis treatments, hormone replacement therapy and HIV drugs.

These are expensive drugs, not everyone will have the drug they need funded, but there will be tangible benefit for many.

Of note locally is the commitment by the Government to fund the digital plan drafted by the soon-to-be-disbanded Southern District Health Board, an expensive but essential step towards the new Dunedin Hospital achieving the aim of it being the country’s first digital hospital.

Climate change was the other key area of investment in Budget 2022.

Little will be achieved in this sphere immediately, but having declared a climate emergency, the Government had to show some urgency.

A $2.9billion climate emergency response fund sounds good but it is, again, another short-term measure.

It will provide the money to pick the low-hanging fruit in terms of decarbonisation: harder needles to thread such as the future of heavy industry and Southland’s Tiwai Point smelter will have to wait for a later Budget.

It is a start though, and this difficult work has to begin somewhere and somehow.

Mr Robertson is hoping three months of aid will keep the wolf from the door for many households, and that in the meantime that the overall economy will stabilise and inflationary pressures will ease.

It is a Budget in which the Government is making do and hoping for the best, much like many New Zealanders.

If running a large deficit at a time when unemployment is very low and inflation is threatening to get away from us isn't 'reckless' and 'profligate', it's hard to think what would be.

I thought when John Key raised GST they were going to put it back to 12.5% at a later date - now would've been a good time. I'm just wondering where all this additional value (or lack thereof) has appeared from.