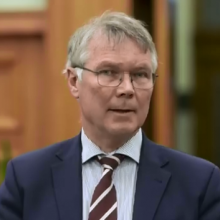 Last week yet another annual international summit was held by Zoom rather than in person.

The annual meeting of the five attorneys-general from New Zealand, Australia, Canada, the United Kingdom and the United States does not gain much attention, but former Otago MP David Parker and his overseas colleagues discussed legal issues with potentially broad impacts on us all.

While New Zealand writes its own laws according its own constitutional arrangements, it is not averse to peeping over the shoulder of like-minded countries to see what they have been up to, and British law in particular is still heavily indicative for how a judge might view a novel issue.

High on the agenda for Mr Parker and his colleagues were Covid-19 pandemic legislation, unwanted influence from overseas in the electoral process, and counter-terrorism measures.

Every country in the world has been affected to a greater or lesser degree by the global pandemic, and each country has had to confront the same rights and responsibilities debate being played out in New Zealand regarding vaccination mandates and vaccine passports.

Liberal democracies allow their citizens freedom of assembly, movement, and the right to refuse medical treatment, but in the face of a disease which cares not at all for constitutional niceties they have had to put into effect varying degrees of enforcement measures on people to protect the safety of themselves and others.

Legal frameworks are not renowned for their flexibility, but have had to bend like never before as New Zealand ponders issues like, to take just one example, internal border enforcement.

State borders are a hot topic for all federal countries, so there may well have been much for Mr Parker to learn, should Covid-19 once more demand a part of New Zealand be shut off from the rest of the country.

New Zealand can no doubt also learn from the experience of other countries which have had vaccine passes and mandates for much longer as to where the future legal pitfalls may be located.

There were great fears before the recent US election, and to a lesser degree the roughly concurrent New Zealand election campaign, about the impact meddlers from overseas might have in influencing voters.

The aftermath of both elections suggests it was minor, but given it has certainly played a role in other elections it is something to keep an eye on.

The trans-national nature of such offences makes detection and prosecution problematic, but the legal authorities committed to making public any such anti-democratic endeavours they had discovered.

Unsurprisingly, the attorneys-general condemned terrorism of all kinds, especially recent attacks in Auckland and Christchurch, in England and Canada.

Countering terrorism is not as simple however, especially if the perpetrator is a lone actor with a limited online or public profile.

The summit also included a discussion on how the law can prevent the spread of material which might be an incitement to commit violence, no easy task given the digitally interconnected world we live in. While the five-nation talks were about a multiplicity of issues, in their communique the participants noted one common thread — the role of social media and its impact on society.

Despite numerous attempts to rein in social media, not the least being our very own Christchurch Call, people are still regularly defrauded, manipulated or blatantly misled by material shared through social media, either by the unwitting or the deliberately deceptive.

New Zealand law contains few tools to tackle those who willingly peddle misinformation; freedom of expression considerations tend to override any such restrictions and legislation such as the Harmful Digital Communications Act require both a harm to be proven as well as an intent to harm. Internet safety watchdog Netsafe is considering what can be done in this space: hopefully Mr Parker’s summit has offered some useful insights into how this and other troubling issues might be addressed.