Cedric Woods sees a special role for Hereweka/Harbour Cone in the face of the world's woes. 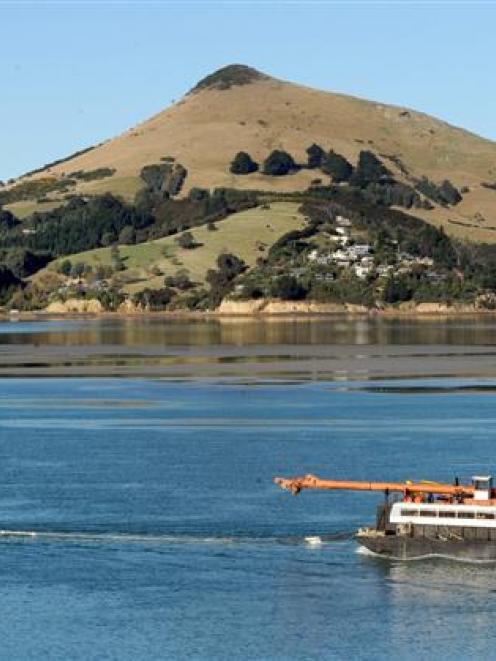 An ecological incubator? Photo by Stephen Jaquiery.
The Hereweka/Harbour Cone Draft Management Plan projects a vision. The details have a nice modern ring, but overall it lacks substance and imagination.

It plans for Hereweka to be part of a one-man sheep farm posing as a rather large and unlikely garden in an impecunious theme park. This will be fun for car-less picnickers, short-day trampers and mountain-bikers, as well as occasional colonial historians and botanists.

With Hereweka already in public ownership, there are many nice, and good intentions in the plan - it's Kiwi green.

But it envisions no more thought for the future than the planting of trees on slopes and in corners where sheep seldom venture.

Fences and TLC, rather than forethought or ecology, will make these saplings safe.

Peninsula historians should acknowledge that within a couple of decades of initial tree clearance on Otago Peninsula, a banker, William Larnach, was buying up 10-acre dairy farms.

After a short-lived dairy boom the land was no longer able to support cows and the whole area reverted to sheep, as now.

World-wide, sheep are the end of the line in soil and biodiversity degradation: typically, managed (but not wild) sheep flocks create deserts.

Maintaining a working sheep farm is a commendable feat of farming skill; but, without blaming the sheep, ecological theory says this is poor use of land. There can be better uses that enhance productivity as well as ecological processes.

The notion of keeping Hereweka as a working sheep farm as a priority over all else was imposed in early 2008 at the time of agreement to purchase by the Dunedin City Council.

Presumably the idea was a knee-jerk reaction to the purchase by some financially savvy clerks: surely, they would have thought, supporting the golden rule of money first is the responsible way to go - what else?

If so, they were nearly right, but business-as-usual thinking has a habit of sidelining real problems while creating others: for example, bag fertilisers reduce biodiversity and thus longer-term fertility in the land.

Economic "efficiencies" are failing global society. Only responsible local land (and marine) management can reverse this. We need insurance against global resource depletion.

As a minority of one, perhaps I look a little wider than most in sizing up Hereweka's potential.

Its 328ha could be Dunedin's insurance against the world's woes - the inconveniences we may suffer in the ongoing global recession (as I labelled it in 2008).

If used to trial land-use ideas, Harbour Cone could help Dunedinites find and adopt sustainable coping mechanisms rather than succumb to tough times. Sound ideas are needed to keep us off the roller coaster of inflation or worse. We have an opportunity to do a deft U-turn and face reality with nature as our best and only long-term life-support system.

The trick is to know how to relate to nature and biodiversity. Using market garden and permaculture techniques is a start, but running local trial plots using science, imagination and youthful enthusiasm is my suggestion.

I accept that most people do not see things my way. People in debt or who grow money as their top priority in life could not afford to look at the big picture or view things long-term - and that includes most farmers on the days they talk to their bank manager.

Even without an earthquake, Dunedin could not pay for insurance that would secure its future. No city on earth could expect that, not with today's woes. Even as affluence went global, resources were running down - soil, water, agricultural land, energy and recently, food.

Since at least World War 2, our civilisation has been running thin on tangible assets. We are sound in New Zealand; we assume we have the right to be complacent. Surely we don't need to worry as we listen to the daily financial news.

But with the world economy relying on growth - now an obviously false goal - inflation corrodes the economy. Inflation can be exciting, yet its nemesis, deflation, is not. We need insurance.

We should hope the depression gives us a chance to re-orientate our relationship with our only life-support system - biodiversity within nature. Most cultures, and all previous civilisations, have crashed - usually leaving deserts.

The fall of Rome left sand where there had been soil across North Africa and elsewhere. That was a big recession: ours looms larger.

But, uniquely, we have superior science and communications to help chart an innovative U-turn.

But can our society apply science, imagination and leadership quickly and objectively? I say scientists acting with imaginations under wide-eyed leadership could do so.

And informed people who already grow their own food and those who supply farmers' markets could do that, except, of course, they are too busy.

Yet, I submit, the most basic necessity and starting point for a better future is learning to revitalise denatured soil. That's the ultimate insurance. Restored soils return clean water and a healthy diversity of crops with increased ecosystem services from the recovering biodiversity.

A reversal of priorities at the council over Hereweka, now or soon, could transform Dunedin's prospects by revealing our full potential by taking inspiration from Hereweka's qualities.

Volunteer pioneers would import understanding (from the internet), trial ideas, and export them to benefit most people in Dunedin and Otago, and many far beyond. Ideas will flow by having young ecologically savvy entrepreneurs seeking social rather than monetary goals on Harbour Cone and its slopes across to Peggys Hill - or anywhere. But a focal point could best inspire visitors to take away ideas to try in gardens and plots.

The value of an actual hub, a Hereweka Wananga with a human mission, could be pivotal in surviving the present, to-be-welcomed, turn-around in our way of life.

Submissions to the council on the draft management plan close tomorrow. We are running out of time to support ecological ideas for Hereweka over a business-as-usual model.

• Cedric Woods is a Portobello ecologist.