It's getting colder, not warmer 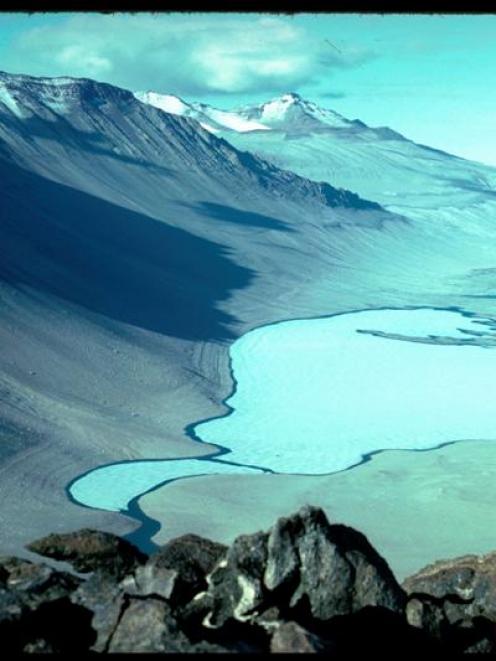 Peter Foster and Lake Vanda, in the Antarctic. Photo by Peter Foster.
Although many scientists are warning of human-promoted climate change, PeterFoster believes otherwise.
Over the past few months, the Otago Daily Times has published many articles from Gwynne Dyer and others warning of mass extinctions, ice shelf break-ups and, of course, the iconic polar bears who are going to snuff it in the near future. All because we naughty humans have filled the air with carbon dioxide that will warm the planet and destroy the ice floes etc etc.

The truth for the polar bears is that they have survived much warmer times than now and their numbers have increased five-fold since shooting them became illegal.

The doom and gloom espoused by Mr Dyer, the World Wildlife Fund, Greens and others stem from two sources. The first is the hockey-stick graphs used by the IPCC (Intergovernmental Panel on Climate Change) and the second is from computer modelling of climate.

The hockey-stick graphs are those showing 1000 years of slightly cooling temperatures followed by a sharp upswing in the past 150 years. These graphs have now been thoroughly discredited despite the authors' attempts to hide their data. It was a story of appalling statistical methodology, cherry-picked data and deliberate falsification. The aim of the scientists involved was to make out that the Medieval Warm Period (MWP) and Little Ice Age were local North European events. It was impossible for them to blame the 1976-97 warming on CO2 if the MWP was warmer than now and global. Data collected from around the world, including excellent ice-core data from the Antarctic, show that these climatic events were indeed global.

A major problem with the climate debate is the failure to look at historic values of temperature and CO2. For example, warmists will say, "Look, CO2 is the highest for 20 million years", which is true, but in the past 600 million years, during which higher life forms evolved, it has been above the present level of 400ppm for some 84% of the time and above 1000ppm for nearly 75% of that time. In fact, the only other time CO2 reached levels as low as the preindustrial levels was about 300 million years ago and that episode ended with the Permian mass extinction.

With respect to temperature, the normal state is about 5degC warmer than now with no polar ice caps. Ice ages occur every 148 million years and last 16 to 50 million years. The four ice ages in total have existed less than 17% of the past 600 million years.

We are near the end of an interglacial whose temperatures are about halfway between ice age and normal.

The GISP ice-core data from Greenland shows that every warm period over the past 3500 years has been cooler than the preceding warm period and the Little Ice Age 300 years ago was the coldest for more than 8000 years. Clearly, we are heading back into ice age conditions. 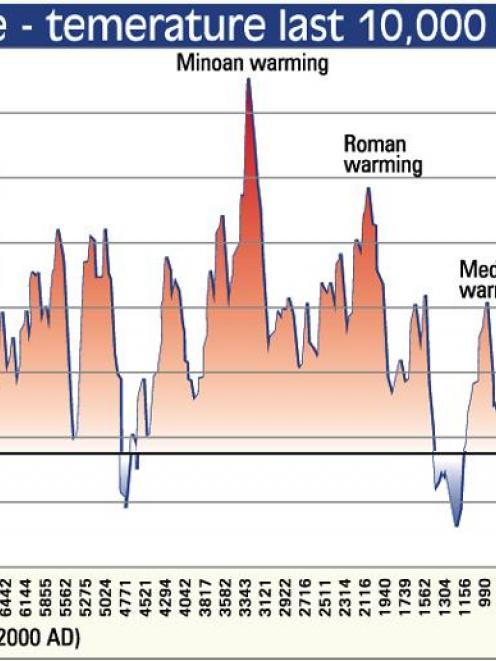 Data: R.B. Alley, "The Younger Dryas cold interval as viewed from central Greenland". Journal of Quaternary Science Reviews 19: 213-226.
Many years ago, I spent four months at Vanda Station in the Antarctic. Lake Vanda is an inland lake in the Dry Valleys covered with 3m of ice. Melt water from a coastal glacier flows 30km inland to the lake for six weeks in the summer, causing the lake to rise.

Sublimation over the rest of the year then reduces lake levels again. The lake rises and falls with climate change, making it a very good indicator of climate.

Lake levels from warmer periods are visible by the algal scum left around earlier lake edges; the highest of these was 46m above the 1986 lake level and occurred 5000 years ago.

All of the above shows that there is nothing unusual, unprecedented or even remarkable about the present temperature of the earth.

It also shows that CO2 is historically very low, even at 400 parts per million.

The doom and gloom and the costly ETS arise from the predictions of climate models.

Although we read a lot about their predictions, we rarely get anything about how badly they have performed.

To date, there have been many papers using observations from the real world that indicate the sensitivity of climate to CO2 is about 0.5degC/doubling of CO2, not the 3 to 6degC claimed by the IPCC. Global temperatures have tracked lower than Nasa climate scientist James Hansen's 1988 curve C model, which was the projection if there was no further increase in CO2!

Phil Jones, of Hadley Climate Research Unit, where much of the IPCC information has come from, stated that there had been no statistically significant warming since 1995, and now we have a paper that tells us the modern warming period ended in 1997.

The Filchner-Ronne Ice Shelf collapse was based on models that predict the Southern Ocean should be warming at 0.048degC/decade when, in fact, it has been cooling for the past 10 years at nearly 0.1degC/decade.

The models claim that sea level rise will accelerate but tide gauge measurements from around the world show an average increase of 1.1mm/year and no acceleration. There is supposed to be, according to the models, an atmospheric hot spot 10km up in the tropics. No hot spot exits.

A theory in science only lasts while it is accord with observations. The theory of catastrophic anthropogenic global warming has failed in so many respects that it should have been discarded years ago.

In the meantime, the theory of climate change being driven by solar activity and cosmic radiation not only has excellent correlation with historical data but now has a well-understood mechanism to explain it. We will not have long to wait to find out which theory is correct. Solar activity has been decreasing rapidly and the sunspots that help reduce cosmic radiation will drop to near zero in the next five years.The last time that happened, the Thames froze over.

By Peter Foster from Collingwood, NZ.