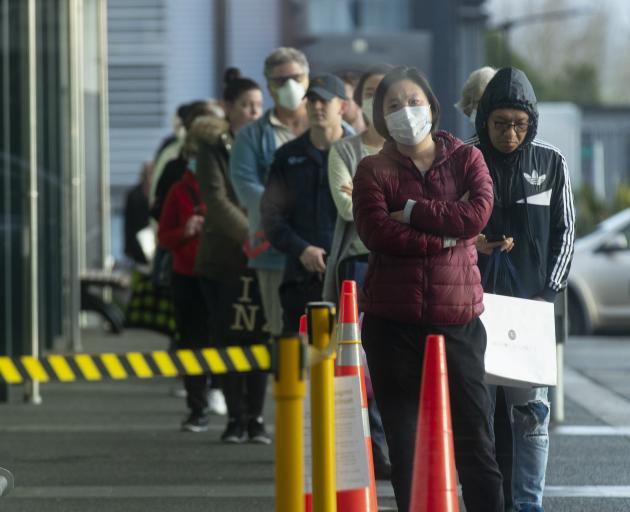 How we deal with the aftermath of the pandemic-storm will be vital. PHOTO: THE NEW ZEALAND HERALD
Sometimes the most pressing thing may not be the most important, writes Ben Hudson.

It feels like the calm before the storm. As I write this — I say that because things change so fast these days— we wait to see just how fast the expected Omicron wave will pass, and how high it will peak. Will it be a tsunami? Or more like the flow of the tide — gentler perhaps, but for how long? I’m not entirely sure which scenario to hope for.

Three of the four Gospels record a famous scene in a boat in which Jesus calms a storm that was so fierce, his friends were afraid for their lives. As I read, in this case Mark’s account (Mark 4:35-41), I am struck by three things about Jesus.

First, Jesus is not perturbed or threatened by what troubles us. As the waves and wind mount up and swamp the boat, Jesus, we read, was sleeping. Napping! Maybe he was just that exhausted. But, in light of him calming the storm with a command in the next sentence, surely this is the untroubled rest of one who has no fear of wave or storm. Jesus was calm in the storm. What terrified the disciples, did not even disturb Jesus’ sleep. He is not at the mercy of storms, as are his friends, nor of disease, or death. These things, rather, submit to him and do his bidding. The Gospels offer us a Lord who is strong in the face of life’s troubles. Indeed, the Jesus of the Gospels is a man uniquely endowed with divine power and authority — even the authority of the creator over his creation.

Second, Jesus is not indifferent to our plight and fears. The frantic friends wake the sleeping Jesus, shouting, “Don’t you care if we drown?” Yes, he does care. His unflappable, divine fearlessness does not make him distant, removed, or unsympathetic. Jesus’ tender compassion for the poor, the marginalised, and the sick is a striking feature of his character. He is a friend to the fearful. In a very tangible sense, he is with them in this storm. Christians confess that in Christ, God has drawn near to humanity, becoming one of us, identifying with us, and sharing our condition. He is with us in the storm.

The miracle, then, demonstrates not only his divine power, but also his willingness to save and rescue. In the storms of life Jesus is unperturbed, but not indifferent. He is able and willing. It is power and love. That’s a good combination in a crisis. And it is that combination which leads people of Christian faith to turn to God in prayer in times of trouble, anxiety, and uncertainty, and to face them with hope. As the Bible says, “cast all your anxiety on him because he cares for you” (1 Peter 5:7).

Finally, I’m quite taken with a delightful expression Mark coins at the end of this story. After Jesus stills the storm, a two-word oxymoron describes the scene: there was a “great calm”. We might say, ‘a deafening silence’. This was no ordinary calm. It was a great calm — a profound calm — for a man had just told wind and waves to stop, and they did! Before, the disciples had been afraid. Now they are terrified! Wide-eyed they ask, “Who is this man?”

It’s a reminder that sometimes the most pressing thing may not be the most important. Sometimes the thing that has all our attention, or the thing we’re most anxious about isn’t necessarily the biggest problem we have. In the urgency of weathering the pandemic-storm, let us not forget to attend to those things that are always important. It might be worth reflecting on what the calm after the storm may reveal we are neglecting.

In the calm after the storm, Jesus’ disciples realised that their bigger problem had been with them in the boat the whole time! In his power and love, the person of Jesus offers great hope and comfort, but as he does so he also creates a problem for us. Because if there is anything of substance in the hope and comfort, the power and love, then we must also acknowledge that he is the Lord. And if he’s the Lord, then we must reckon with him. We must listen to him. We must take him seriously. If he’s the Lord, then we are dependent on him, and we will be accountable to him.

Even during life’s storms, there are some questions to which it is always important to attend — perhaps none more so than: "Who is this man?"

- Ben Hudson is the pastor at Grace Bible Church.