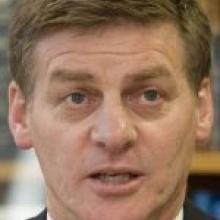 Bill English
John Key and his National Party colleagues may well take a hit in the polls in the wake of Thursday's mediocre Budget.

The document has had a chilly reception. Few are shouting its merits from the rooftops, That is because National has been too clever by half.

In short, voters are not stupid. The changes to KiwiSaver will make them rightly suspicious of what National has planned elsewhere.

Likewise, National will get no thanks from the nearly 110,000 families who have had reductions in their Working for Families entitlements, even though the re- targeting of the scheme is justified. Arguably, that exercise should have gone further.

The scheme was extended by Labour to wealthier families in what was a blatant election bribe ahead of the 2005 election.

But the numbers of people affected, plus the fact that money would be coming directly out of their pockets, meant National was never going to have the courage to cut more boldly.

That it did with KiwiSaver was down to the benefits of the scheme not becoming available for most members until the age of 65.

To minimise public discord, National has limited the reductions in the family tax credits payments to a maximum of around $8 a week. The net result is savings of just $448 million over the next four years compared to $2.6 billion from KiwiSaver over the same period.

Had Mr Key and Mr English been less circumspect about cutting Working for Families, then the Budget's projections for a return to surplus within four years might have been less tax revenue dependent and therefore a bit more credible.

The international credit rating agencies, such as Standard & Poor's, may have bought what it describes as an "ambitious" timetable for getting the Government's books out of the red, thus averting a downgrade.

However Mr Key and Mr English now have to stick to that timetable. And that will not be easy.

Before the Budget, National's private polling is said to have shown its support dropping by a few percentage points.

Unfortunately for Labour, the disaffected apparently parked themselves in the "don't knows" rather than shift its way.

Before that, the election had, if anything, looked more in the bag for National following Don Brash's takeover of Act New Zealand.

The pending installation of John Banks as the latter party's candidate removes National's worry about votes being wasted to its right.

Brash's reappearance gives licence for Mr Key to reassert his control of the centre ground.

Centrism is not an excuse for cynicism, however. The Budget has displayed a degree of cynicism one would expect from a Government in its third term, not its first.

We were told for months by Bill English this was going to be the "Savings and Investment Budget". Yet, Mr English cut the Government contribution to KiwiSaver in half and then to add insult to injury extended the tax on employer contributions to pension schemes to KiwiSaver.

Trying to argue black is white, the Government then claimed those in KiwiSaver would have more funds when they retire than would have been the case under current policy settings.

Well, of course, they will, given minimum contributions from employees and employers have been raised from 2% to 3%.

It is two steps forward and one step back for KiwiSavers. The taxing of employer contributions means someone earning $70,000 on the 3% rate stands to lose around $630 a year. That rises to about $1000 for those earning $100,000.

This tax impost, however, was strangely absent from the Prime Minister's pre-Budget speech a week earlier in which he gave a broad steer on the changes to the savings scheme.

That might have seemed like cunning politics. Many KiwiSavers may be unaware of the tax heist because of limited media coverage of the tax's introduction.

Now comes the news that the Government contribution of $1040 a year will be halved this July - not July next year as the Budget documentation and Cabinet ministers seemed to be saying.

National has yet to get the mandate it is seeking before selling stakeholdings in Air New Zealand, power generators Genesis, Meridian and Mighty River Power, as well as coal company Solid Energy.

These revelations are potentially far more damaging for Mr Key than any assortment of Labour Party-inspired beat-ups involving BMWs, the police diplomatic protection squad, helicopter flights or whatever.

Mr Key's popularity is based in large part on him being straight with the public.

Such reputations are hard won and easily lost.