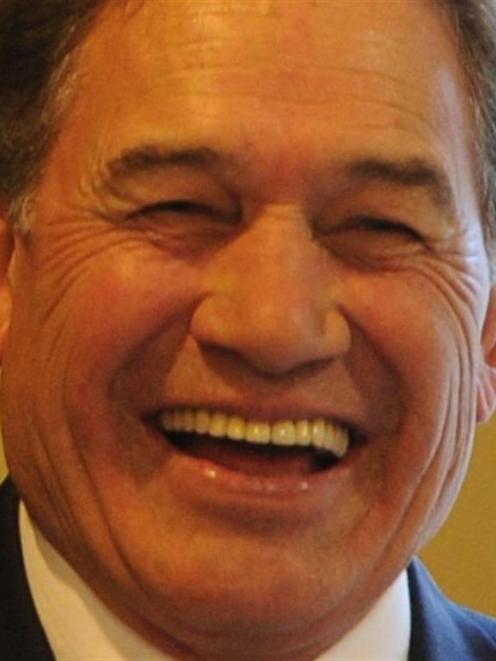 But it was not quite as aspirational.

But the trigger point for Mr Trump's and Mr Peters' take-down policies was nonetheless the same: if he did not like the look of you, you were goneburger.

Mr Peters' policy was to recall some of the ex-politicians posted to diplomatic posts on the grounds they were appointed on a "jobs for the boys'' basis rather than merit and were not up to the job.

Mr Peters even went so far as to say if he had the balance of power in 2017, he would make this Crony Recall Policy a factor in a confidence and supply agreement.

The arbiter of which former MPs were suitable was to be the highly impartial judge known as the Right Honourable Winston R. Peters.

Mr Peters remained impressively deadpan while insisting there was nothing personal about this crusade against ex-politicians.

But it is pretty clear it was not his old buddy, roving Pacific Ambassador Shane Jones, Mr Peters was talking about.

There have been good former MPs deployed to foreign climes.

Mike Moore and Sir Jim McLay count among them.

Sir Jim led New Zealand's bid to head the Security Council and has since been knighted, appointed special adviser to the PM and Murray McCully, and has now been sent to Honolulu for the winter where he is acting consul until a permanent replacement for Robert Kaiwai is found.

Former trade minister Tim Groser headed to Washington without much of a quibble about whether he's up to it.

Mr Peters' policy announcement coincided with Mr McCully considering a round of diplomatic posts, including London where Sir Lockwood Smith's tenure as High Commissioner is due to end in February.

Mr Peters' obvious targets were Sir Lockwood and Speaker David Carter, who was rumoured to be heading for the diplomatic posting in London.

Far be it for us to suggest Mr Peters would be motivated by old grudges but there are old grudges aplenty.

Mr Carter's sins date back to the days he chaired the select committee that looked at the Scampi Inquiry.

Mr Carter compounded this in recent years by kicking Mr Peters out of Parliament on a regular basis as Speaker.

Sir Lockwood committed many of the same crimes as Mr Carter when he was the Speaker and also had the gall to have beaten Mr Peters in a selection contest for National.

Within a day, Mr Carter was strolling around the press gallery with a statement saying he had no intention or desire to be the ambassador to London.

That was followed by Foreign Minister Mr McCully confirming a non-politician was in line for London.

Rarely have Mr Peters' policies been so swiftly implemented.

Had National been thinking strategically, they might have deployed a whole army of ex-politicians around the globe to give them more to recall in coalition talks with Mr Peters after the 2017 election.

But Prime Minister John Key was dealing with his own foreign policy issues, although in his case it was foreign trusts and foreign investment rather than foreign relations.

The obvious booboos in the Overseas Investment Office's process of awarding a 2014 consent to buy a farm to an Argentinian tannery company owned by the Grozovsky brothers came at a bad time.

The brothers were being prosecuted for pollution in waterways in Argentina.

The outcome of that case is yet to be determined but was not disclosed by the brothers and although it was found by an OIO staffer on the internet, it was not mentioned in the briefing that went to the ministers who made the final decision.

To rub salt in the wounds, a big part of the applicants' case was water quality.

The report said "the applicant is particularly interested in supporting water quality and nutrient leaching research in New Zealand''.

Those ministers - Jonathan Coleman and Maurice Williamson at that time - will be furious.

Their successors Louise Upston and Paula Bennett will undoubtedly be more sceptical about the OIO's recommendations in the future.

The reason for sensitivity is that the law changes required to implement the TPP are about to go before Parliament.

The criteria for sensitive land will remain the same, but there is a doubling in the threshold of investment spending before OIO approval will be needed, from $100 million to $200 million.

That is expected to mean the number of foreign investments which require approval is almost halved.

The last thing the Government needs when trying to dampen down public concern about foreign investment is stuff-ups by the one body charged with overseeing that investment.

Hence the rapid-fire decision by the Government to boost the OIO's ability to charge higher fees so it can employ more staff.

Mr Key was still dealing with questions about the role his lawyer played in a decision by the Government to call off a review of foreign trust laws in 2014.

The big question the Opposition is pursuing is whether Ken Whitney's association with the Prime Minister was a factor in the decision to back down on the review of foreign trusts.

Mr Key and Todd McClay are probably both now ruing the decision to scrap that review.

The IRD had proposed it because of the risk of damage to our international reputation if our foreign trust regime was found to be too loose.

Ta-da, along came the Panama Papers which have done just that. Just when National needed as much distance between themselves and tax avoidance as possible, Transport Minister Simon Bridges was setting up another tax avoidance scheme for the wealthy, cunningly disguised as the "Electric Vehicles Programme''.

It proposed exempting electric car owners from paying a tax in the form of the road users' levy and allowing them to use bus lanes.

Given the $80,000-plus price tag for an electric car, that policy equates to a tax cut for the rich with the added bonus of a licence to jump the queue in traffic jams.

Perhaps Mr Bridges should rename it the Road Rage Policy, because the only thing that will save those drivers from becoming victims to road rage is that nobody will hear them coming as they slink up the inside lane.