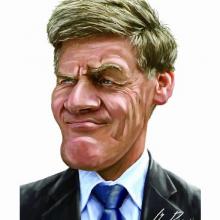 National’s current performance on the election campaign trail would have to be classified as one of the party’s most confused, insipid and uninspiring showings since ... well,  since the last time Bill English was leader of the National Party.

Unlike the debacle of 2002, however, English should not feel obliged to shoulder all the blame if, as seems more and more likely, National is in receipt of the Order of the Boot in a fortnight’s time.

Thursday’s 1 News-Colmar Brunton poll was another nail driven firmly into National’s coffin. The survey’s significance went a lot further than its registering support for National dropping below 40% for the first time in a very long time. If that trend is sustained and Labour can build on its four percentage point-lead over its old enemy, then National will be shut out of the power equation. The question of who rules will be reduced to which minor parties end up being the coalition or support partners for a Labour-led administration. National’s predicament might well be even more dire were it without English’s grit, wit, endurance and stoicism.

Thanks to him, National is still in the contest, even if it is only clinging on by its finger-tips.

As the election campaign has progressed, English’s stature has grown in inverse proportion to his party’s declining fortunes.

When it comes to being prime ministerial, English is now the real deal. He is authentic. He is authoritative. He will never win any medals in the charisma stakes. But the campaign has amply displayed his depth of character.

Dipton Man is close to becoming Renaissance Man. But not close enough. He is struggling to combat Jacinda Ardern’s monopoly on excitement and hope.

Listen to Labour’s leader of all of six weeks and you hear a lot of the phraseology previously mouthed by Andrew Little. The difference is Ardern’s packaging of that language. It may be what English describes as ‘‘stardust’’, but Ardern makes it sound like substance.

English’s bigger failing, however, has been an absence of vision. He is finally acknowledging his successful running of the economy has provided a ‘‘special moment’’ for the country. But a special moment to do what?Ardern’s cutting response is to ask, ‘‘Is this as good as it gets?’’ And then frame the election as a choice between drift or doing things very differently.

Still, English has lifted his game. Unlike others. In order to have any chance of achieving the seemingly unachievable and retain power for a fourth straight term, National needed a lot of good luck and everything to go right. Its luck ran out from the moment Little walked away from the leadership of his party.

Not a lot has gone right for National since its satisfactory, but hardly mesmeric campaign launch two weeks ago. The clangers dropped by Paula Bennett and Steven Joyce are proof of a law of politics that when things go wrong they really go wrong.The inadequacies of National’s campaign are further evidenced by its theme song — a Bob Dylan-like dirge which only inspires a desire to sleep.

Having been accused of ripping off Eminem at the last election, National is now ripping off itself with a tired and lacklustre imitation of the advertisement it used in 2014.

If National has a strategy, it is muddled. National’s initial response to Ardern’s promotion was to avoid passing judgement on her.Then National argued that while Labour’s leader had changed, the party had not.

Now, National is arguing that, in fact, things have changed rather a lot since she took the helm. At the same time, it is arguing that Ardern is short on substance and full of stardust.The debate in National’s inner circle will now be over just how negative it should go in its offensive on Ardern’s credibility.

Given the current public adulation, such an assault risks backfiring on National.

Whether or not it goes down that path will be determined by whether its private polling is showing it is now falling so far behind Labour that it has nothing to lose by taking a strongly negative tack.

But it may be all too late to make much difference.

Labour with the help of very friendly media coverage have outplayed National in this campaign. Labour have the most radical programme since Lange in 1984 which will have significant consequences to future of New Zealand and National should be asking serious questions but just aren't asking the right questions.

'Radical' is a point of view. National under Bolger/Richardson broke the social compact, and rampant self interest became the norm.

Hes like Helen clark been gone and done nothing Still in the news.... ho hum