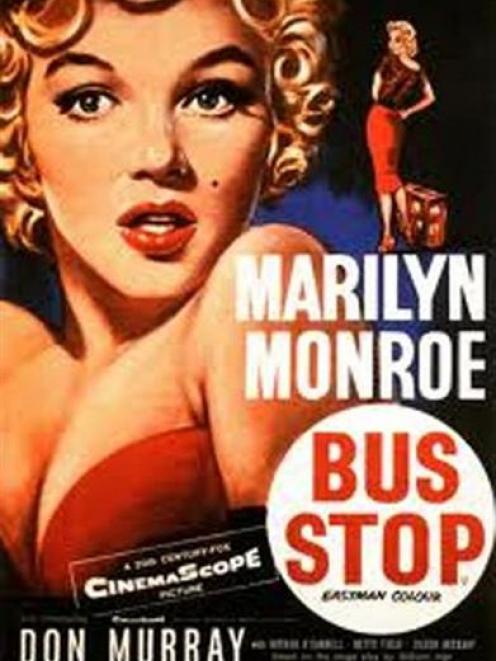 True story. In the 1970s when I was writing the satirical cricket column ''Section 13'' for The Evening Star, the captain of a visiting international side, very famous, misbehaved in Dunedin and I thought this should be mentioned in the column's irreverent litany of insults. I called him a wanker. The word was not in common usage then, and the subeditor asked me what the word meant. It's a cross between a conker and a walnut, I said, a sort of chestnut. The Evening Star duly printed that the famous international captain was a wanker.

The Marilyn Monroe movie Bus Stop is definitely an old chestnut. 1956. I could lie and say I have watched this movie fourteen times I love it so much, but I have only watched it twice, two weeks ago for the first time and last Thursday to check a couple of things. It is a fantastic film, one of the very best of all the Monroes. Ironically, she did this one, a drama, to show she could act, not just dance around like a piece of giggling fluff. The irony is the film is hysterically funny.

Beauregard, everyone calls him Bo, is the cowhand hunk, appallingly played by Don Murray. That he received an Oscar nomination for this is just silly. Marilyn is Cherie, a singer who, when she isn't singing saucy songs about black magic, sits on truckers' laps in Phoenix's Blue Dragon bar and makes them buy whisky. She has her heart set on Hollywood and Vine. Bo is going to Phoenix for a rodeo. On the bus he discusses life with his surrogate dad Virge, who has known him since he taught him to swim at 8. Virge tells Bo he needs a gal, and that women and swimming are pretty much the same. Bo says he knows nothin' about women but he does know he wants an angel, not one of them gals in the magazines. Bo has a brain the size of a gnat's eyeball. He tells Virge he will capture his angel like he breaks in a steer.

After Cherie has sat on Virge's lap and made him buy a lot of whisky, she sings a song. Bo, dripping in hair oil, walks into the bar and realises instantly he has found his steer. They go outside. While Bo talks, he swings high on rafters like he is an orangutan. She tells him her name is pronounced Cher-ee because it's French but he calls her Cherry. He says his name is French too; it means good-lookin'. They kiss; he tells her he will marry her after the rodeo the next day. She is dumbfounded; she has been kissing since she was knee high and it never means marriage. Then she signs a marriage licence, because she is stupid.

Bo charms her with sensitive romantic lines that belie his complete lack of experience with women. He tells Cherie when they are married, she can have any electric appliance she wants. Back in his hotel room Bo romps happily in a big soapy tub. He says it is the first time he has ever had a shower and a bath at the same time. He asks Virge what the difference is between a physical and regular attraction. Virge tells him some women like a man with a mind, and explains what words and writing and poetry are.

So Bo recites the Gettysburg Address to Cherie after waking her from a deep sleep. Cherie decides she just can't marry this loon; she has in fact turned into a bum steer. She plans to escape in the ever-present bus but, with the assistance of a lasso, Bo catches her and climbs aboard with Virge.

Then comes snow, a great fight, mental torment, Marilyn in clinging leopard skin and leather, and the best heart-ripping finale to a romantic movie you will ever see. Bus Stop is an old chestnut. It IS the best. And Bo is a wanker.