More of the same no use

Government attempts to take over the roles of family and genuine community are doomed to failure, writes Tani Newton, of Oamaru. 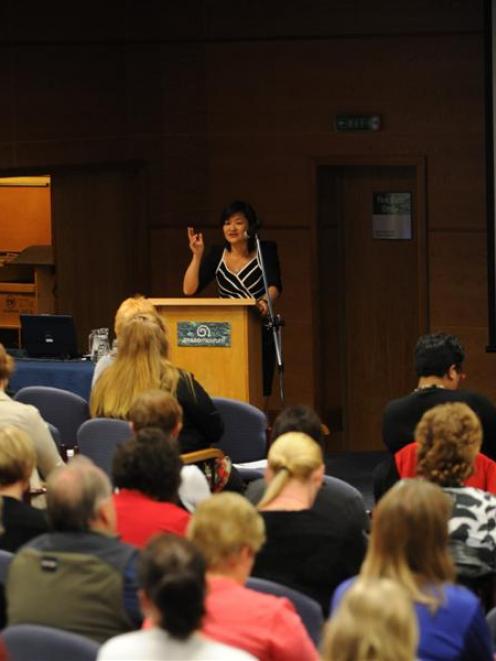 Lawyer Mai Chen speaks on the Government green paper on vulnerable children in the Hutton Theatre at Otago Museum last month. Photo by Peter McIntosh.
There's a quote I've heard several times recently: "Don't keep doing the same thing and expect different results". That would be my one-sentence response to the Government's green paper on vulnerable children, on which submissions closed recently.

Child abuse is not a disease.

It's a symptom - a symptom of the breakdown of marriage and the family and the rejection of our Christian heritage and traditional values. Our society has never been ideal, but if we continue on our present course, it's only going to get worse.

It is ludicrous to suggest that all we need is more of the same - more government intervention, more bureaucracy, more paper-pushing, more taxpayers' money going down the drain, more Big Brother snooping and spying on us all.

I almost missed making a submission on the green paper altogether, ironically because my husband and I have been taken up with trying to help three different families who were all being put through the wringer by Child, Youth and Family for no good reason, but also because the questions were so heavily loaded that it was difficult to answer them at all.

The paper seemed to be trying, among other things, to garner support for some kind of tracing system which would enable the government to keep records on all children from birth and "support" (read "threaten and intimidate") parents into subjecting them to every programme devised for their supposed benefit.

Can we really be that gullible?

There is a Mt Maunganui of evidence of the shocking abuse of children and parents by CYF and their minions. I have yet to hear one person extolling the marvellous benefits to his or her life from CYF's involvement.

Why then am I expected to believe that "more of the same" will see every child in New Zealand living happily ever after?

The crucial point we seem to miss is that the only power the government actually has is brute force. Now brute force is necessary to the legitimate tasks of civil government, such as maintaining law and order.

But it is not an effective vehicle for charity and compassion, which is one reason government attempts to take over the roles of family and genuine community are doomed to failure.

Anyone who has spent more than a few seconds trying to help people whose lives are in crisis will know one thing for certain: it's complicated. If every "vulnerable child" had just one simple problem that could be fixed by pressing a button or filling out a form, then a government agency (or, obviously, anybody else) could fix it. But that's not the world we live in.

Yes, there are things the Government could do about the sickening child abuse statistics.

It could start by admitting culpability for exacerbating the problem by hopelessly flawed attempts at solving it. And here are a few more things that could be done:

• Change section 59 of the Crimes Act (the so-called anti-smacking law) so that people can keep their children under control and protect them without fear of prosecution.

• End state-sanctioned abortion. Nothing sends a stronger message that killing babies is OK.

• Scrap the whole Ministry of Social Development - it's nothing but a parasite on human misery.

• Return the money saved to real people by lowering taxes so we can do more to help each other.

• Stop trying to change the definitions of marriage and the family, and stop making it financially advantageous for families to separate.

• Repeal all laws which give the government more authority over children than parents, including the compulsory school attendance law.

None of these things would give us the perfect society we seem to think we deserve. But any of them would be better than doing the same thing and expecting different results.

- Tani Newton is a mother of five and convener of a home education support group.