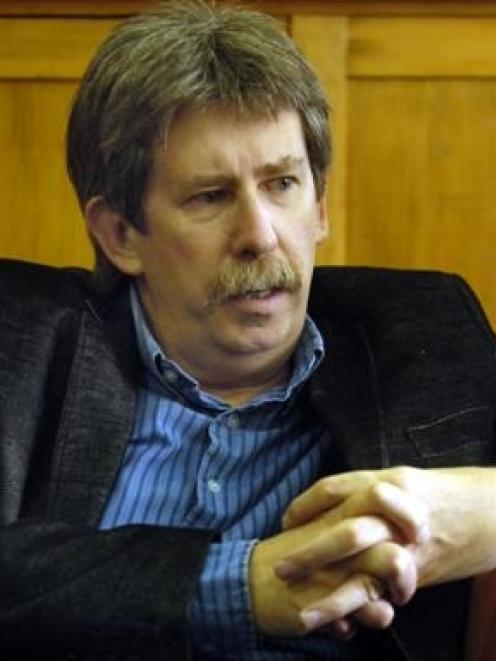 Richard Thomson: "Errors in logic" over service proposal. Photo by Jane Dawber.
If people do not speak up, Southland and Otago may lose a critical surgical service - with all the significant flow-on impacts. Richard Thomson leads the way.

It's time for the public of Otago and Southland to make their views known around the possible removal of neurosurgery from Dunedin Hospital.

The Southern District Health Board has taken a view to date that common sense will prevail, so we should make our representations through official channels and not do anything to frighten the political horses.

The report of the independent facilitator, Dr Ian Brown, has rather demonstrated that common sense has got damn all to do with it.

I think we have been wrong to assume that it would prevail.

A second report has now been called for by the Ministry of Health because Otago and Southland have not been able to agree with their South Island colleagues regarding Dr Brown's recommendation.

We should not wait for it before making our views known, in case that silence is misinterpreted as assent.

My position is relatively simple - if it can be demonstrated that providing neurosurgery in Otago is unsafe, unsustainable, and/or too expensive, then we should be open to making a change.

Yes, there are wider issues and I do think they are important.

Neurosurgery being done only in Christchurch would have a significant effect on other disciplines.

Neurology and general surgery in particular would be affected.

That would impact on recruitment.

Trauma cases would go to Christchurch in the first instance much more frequently.

That would impact on training.

These are very significant wider issues - but they become issues only if things like safety, sustainability and cost drive a decision to centralise neurosurgery in Christchurch.

A little bit of background first.

South Island DHBs are rightly being prodded by Wellington to address where services are provided.

It makes clinical and financial sense to centralise some services (eg, some are only provided in one place in the country).

This is driven by things like sub-specialisation (you don't want to have a difficult operation done by someone who only does it once a year, so you bring such procedures to someone who specialises in them).

It is driven by financial costs (it can cost ten million or more for a linear accelerator to treat cancer, so you don't put one in every hospital).

However, there are two basic ideologies in play here.

Centralisation brings service provision to one place and patients come to it.

Regionalisation brings service administration and planning to one place but attempts as much as possible to deliver the services where the patients are.

The service should be administered as a South Island wide one, paid for on a population based formula, and sub-specialisation may still be centralised in one or other place, depending on which skills exist in which surgeons.

Christchurch has argued that this is not sustainable and that all six surgeons should be based in Christchurch and that the patients should come to them, except in a handful of cases.

The rationale is that a two-person service is unsustainable in Otago and that having all six surgeons in Christchurch would enable a one-in-six on-call roster that is much more attractive to the surgeons.

They claim that it is largely cost neutral and that it is safe to bring the patients to Christchurch for surgery. I disagree.

Let's have a look at the issues.

The first key assumption is that neurosurgery is unsustainable in Dunedin because we cannot get staff and staff won't work a one-in-two on-call roster.

Otago has had dedicated neurosurgeons for decades. It is only recently that we have had none.

However, we have none because we agreed to work through the process first.

The board has been aware for almost two years that we have neurosurgeons who wish to come here and are only waiting for us to offer them a contract.

They are even prepared to come here aware of the uncertainty surrounding the service.

The second key assumption is that it is safe to have patients travel to Christchurch for surgery; part of the logic for this is that this happens already if you have a head trauma in Nelson or Greymouth or Invercargill.

This is a fundamental error in logic.

That it is not possible to put a neurosurgeon in every hospital in the country is determined by resource availability, not because we believe it is fine to spend six hours getting them to theatre in a remote location. Christchurch says they would train general surgeons to do stabilisation and some immediate acute procedures.

Our general surgeons have made it plain they do not feel this is within their sphere of competence.

Darwin has been cited as an example of this working well.

And it does, to the extent that there is no other option.

However, when asked if they would remove a neurosurgery service to have general surgeons do the acute stabilisation followed by air evacuation to Adelaide, the answer from Darwin was an unequivocal no.

If there is no neurosurgery then you find the next best option and that will certainly be better than doing nothing.

This does not mean it is of equivalent standard or safety.

The third key issue is financial.

If you can find the surgeons, then the only reason for not proceeding is if it is much more costly to have a 4:2 service.

I know some people hate the idea of cost being a reason for not doing things medical.

But that misses the point.

If you spend much more than you should in one area of health then you will be spending less than you need in another. So cost is relevant.

And this is the thing that really destroys my faith in common sense.

Dr Brown's recommendation that it be 6:0 based in Christchurch contains no financial analysis.

He simply notes that the two boards could not agree on the cost differential and suggested that it should be looked at further.

How can you make such a recommendation without knowing what it will cost? I have reviewed the figures done by the Southern DHB.

They indicate that the net additional cost (borne by Otago and Southland) of providing this service is in the vicinity of $2 million (they actually say it is higher but I think they have overestimated one or two things, so I have reduced the figure).

Why would you remove a service that we know we can staff, to replace it for one that can only be less safe for some patients, that requires patients to travel away from home for their surgery, when the net financial result is an additional cost on the system of around $2 million?

I imagine I would feel the same way.

But is that a good enough reason to remove the service from Dunedin with all its flow-on impacts?I don't think so and I'm not going to wait quietly around for the next report in case it demonstrates the same level of common sense.

I would urge others to do likewise.

• Richard Thomson is a board member of the Southern DHB and previously chaired the Hospital Advisory Committee in the Otago DHB. The above views are expressed in a personal capacity.