Never too late to stop being last on the block 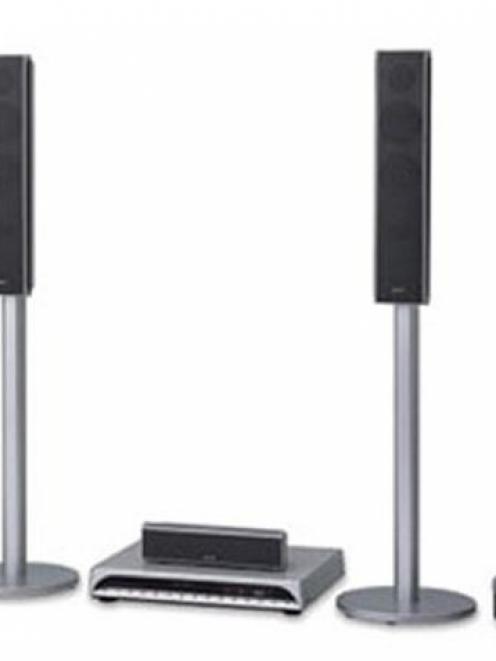 Photo supplied.
Home theatre 5.1-channel sound systems that make action movies swirl around your head like low-flying helicopters have been with us for quite a while now.

I have rejected them completely, just as I rejected quadraphonic sound before that. Under fierce cross-examination, I would not be able to say why, given that with just two speakers I have tried all my life to blow all four walls of a lounge into the street outside, given that being trapped inside high-quality headphones with the volume on Spinal Tap's 11, I am in immovable ecstasy.

I guess I just approximated home theatre with first-on-the-block. I have never been the guy who was the first on the block to acquire something monstrously over-priced with four times as many flashing lights as the thing it replaced. I am very much a last-on-the-block guy; I would much rather buy from Sally Army than Harvey Norman.

But the materialistic dogs of war always get me eventually. Our Friday nights now are called Movie Nights, and the grandchildren sit in front of the telly with popcorn, sugar, high-squealing expectation and more sugar. I am usually sucked right in within minutes. Kids' movies now are stunning. Two weeks ago we all watched Brave.

Call me old-fashioned, I just thought these Pixar/Disney CGI whatsits with phenomenal fakery and no real people were American through and through. And we watched Brave at the grandchildren's own house. Within 30 seconds, when my larynx had moved back to its original bodily resting place from which it had been ripped in the very first frame at the very first effect of sound, I was able to croak out a wheezing WTF like I had never wheezed a croaking WTF before.

It was called a Sony Sound Bar, and it simulated surround sound in a terrifying retina-retching way. I was pounded mercilessly for the next 90 minutes, sonically sat on and punched simultaneously in both temples. An absolutely magnificent experience. I had only one word to say - ''wheredoyoubuythesethings?''

The Sony Sound Bar was, unfortunately, unbuyable the very next day, the day kneejerk Homer Simpsons like me choose when they find something they rilly want, but I did find thousands of systems offering all manner of cinema replication. And, being a Sally Army kind of guy, I drained Trade Me especially, eventually hurling a brown paper bag full of money at a nice man up in Highcliff. Being a Sally Army kind of guy and also too stupid to seriously survive in modern society, I chose a system that was seven years old, way before anyone had heard of Blu-Ray or 3-D or, almost, electricity. The wear and tear on the remote's karaoke buttons also suggested this system had been used for the wrong reasons.

But it looked nice. They reviewed this in 2005 as drop-dead beautiful, worthy of sitting next to the Ferrari in New York's Museum of Modern Art. Sonic historians will recall its onomatopoeically perfect name the Sony DAV FX999W and reel back as if pinned against a wall by a killer snake. A thousand watts, Jimmy, and no change from $1200. My karaoke-thrashed model cost just $160, and the guy threw in his karaoke discs. They probably cost $300.

The Sony is just glorious. Sure we haven't worked out how to set it up perfectly, but the rear speakers are wireless-fed, so no cords are running around the walls to drive wives batty. The booklet is 120 pages without the falsity of foreign languages, and I have 19 different sound settings. My favourites are Cinema Studio EX B, ideal for watching science fiction or action movies with lots of sound effects, and Hall, a cretinous setting, though cretinous is not a bad thing, which is like that noise you heard at your first bible class dance when you walked into a rectangular high-ceiling massively-echoing hall and heard a band playing It's My Life by The Animals. I love that sound.

This must be like what coming out of rehab is like. Yes, it is truly never too late to change.