It would take its place alongside the oft-visited memorial stone to British conscientious objectors in Tavistock Square, near Euston in London, and  memorials in Manitoba in Canada and Massachusetts in the United States. 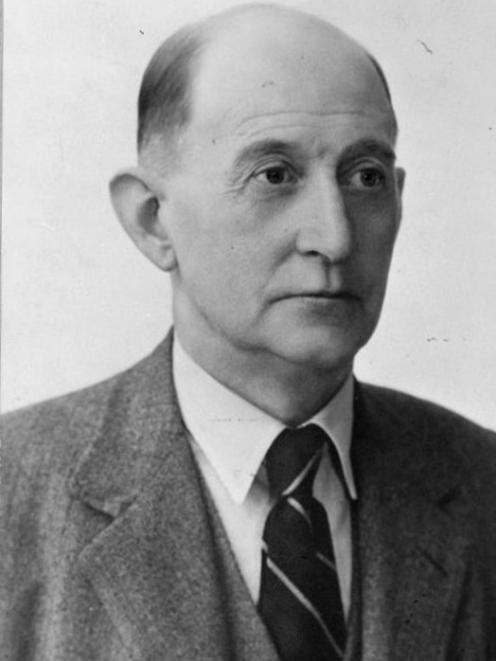 Archibald Baxter. PHOTO: ALEXANDER TURNBULL LIBRARY
The Dunedin memorial, as I understand it, commemorates the sufferings of the objectors in World War 1 who were classified "insincere", and that was most of them, and spent long periods in prison as a consequence.

Specifically, it recognises 14 objectors who were "kidnapped" from camps and prisons in Wellington in July 1917 and taken to France to try to make them fight. All suffered brutality from the Red Caps (military police); four of the more recalcitrant  — Baxter, Mark Briggs, Harry Patton and Lawrence Kirwan — suffered Field Punishment No1 in which  they were strung up on poles in all weathers with their hands tied behind their backs, with their feet and knees bound.

The Red Caps who administered this punishment often had a hatred for these objectors and "bent" the regulations by having their feet off the ground and letting them hang for much longer than the daily two-hour quotas. Blood congealed in their wrists and hands so much that they turned bright red, then purple and black, with the men suffering excruciating pain before they lost all feeling.

Arguably three others — Baxter’s brother Sandy, Garth Ballantyne and William Little — suffered even more horrendous treatment when they were packed off to the notorious Dunkirk Military Prison where some of the guards were violent criminals deliberately brought over from British prisons for the purpose.

With a death sentence hanging over them when they refused to work, they were handcuffed at the feet and ankles, beaten with sticks and whips, left in cells cold and hungry, denied adequate food, hot drinks and underclothing. What food there was, mouldy bread most often, was thrown in the cell and the handcuffed men had to crawl along the floor and gnaw at it like dogs gnaw bones.

These men eventually became stretcher bearers (Little was killed some months later) as did the others, except Archibald Baxter and Briggs who held out to the end.

At the end of World War 1, every city, town and village in New Zealand erected memorials to commemorate those servicemen from their communities who  served and died in the conflict.

That was right and proper. I understood this.

As a boy growing up in a provincial town in the 1950s, I sometimes accompanied my father, a respected army officer and battalion commander who served for close to five years in the Middle East and Italy during World War 2,  as he spoke around the province on Anazac Day.

I was raised in this shadow. I knew Laurence Binyon’s words off by heart and  Last Post and Reveille always brought a lump to my throat.

There was no likelihood of any commemorative memorial for conscientious objectors in New Zealand after World War 1. The great bulk of the populace would have despised them as shirkers and cowards. In many respects, New Zealand’s conscientious  objectors faced an even tougher time during World War 2, when those who chose not to enlist according to  conscience, and who subsequently failed their appeals —  most of them — were locked away in prison camps for the duration of the war which in 1941 and 1942, when most of these appeals were  heard, was an indeterminate sentence.

If you protested, you were packed off to prison. The last objector was not released until May of 1946,  a year after the war with Germany had finished.
This intolerance contrasted sharply with what happened in other allied countries.

The British Government during World War 1 had been equally tough on its objectors, also sending  men  to the front line.

Many suffered long prison sentences, often in solitary confinement, and suicide was common.  But after the war there was a huge upswelling of anger from a wide variety of people, including politicians, that those judgements had been much too harsh, an aberration of the long-held British concept of tolerance for the non-conformist conscience.
Consequently, World War 2 objectors in that country undertook a short prison term and then were sent to work on farms, in forestry, mines, quarries, in  fishing, and in factories  not manufacturing military hardware, to replace the men who had gone to war. The great majority of objectors accepted these constraints — and they were helping the economy. There were similar scenarios in Australia, Canada and the United States.

The difference was that these countries now had the maturity to understand that conscientious objection was a valid position in war.

Unlike Great Britain, New Zealand was still that immature, intolerant society that treated non-conformity with disdain — ranging from distrust to fear — similar to what it had been after World War1.

That it has taken until 2020 for a visible commemoration for these war dissenters or peace advocates has shown how long it has taken this country to  achieve the kind of maturity and wisdom for everyone to acknowledge, with pride even, that there are many and varied war stories.

It is my hope in the future  Anzac Day will be acknowledged with the kind of reverence it always is, and that the internationally recognised Conscientious Objectors Day — May 14 — will be commemorated with a similar reverence at Dunedin’s conscientious objector memorial.

I foresee the memorial becoming a place where visitors can come and contemplate; tourist buses stopping at the site for this to happen — and possibly read a plaque to understand what it was all about.