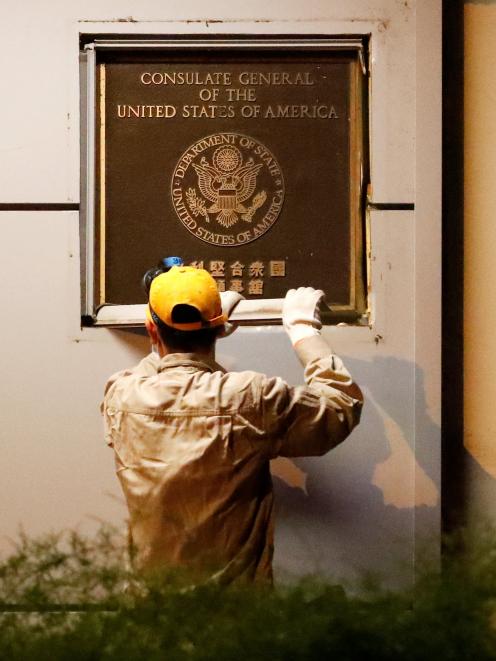 A man removes the plaque at the US Consulate General in Chengdu. China closed the consulate in response to the US Government ordering the closure of China’s consulate in Houston. PHOTO: REUTERS
The United States-China relationship is in freefall. Can New Zealand weather the storm as a neutral bystander, asks Nicholas Khoo.

The already poor US-China relationship, which has been in dire straits since the Donald Trump Administration launched its "trade war" in 2018, has reached a new low.

Last Friday, the US Government ordered the closure of China’s consulate in Houston.

Reports suggest that it has credible evidence that China has been using its consulate as a hub for a variety of hostile activities.

These include running aggressive intelligence operations, conducting economic espionage and intimidating former Chinese nationals living in the US.

China has retaliated by closing the US consulate in Chengdu.

Let’s not fool ourselves. US-China relations were in trouble long before Trump was elected.

In 2015, Harry Harding, a leading China expert in the United States, lamented the poor state of the US-China relationship.

According to Harding, "present [US-China] policy is widely believed to have failed”.

Looking to the future, his concern at the time was that the US-China relationship would become “essentially competitive or even degenerate into open rivalry”.

Under Chinese leader Xi Jinping’s leadership, and on both Obama and Trump’s watch, China’s navy has expanded, curtailing the United States’ ability to operate unimpeded in maritime East Asia.

China makes no apologies for consolidating control over islands in the South China Sea that it contests with a variety of Southeast Asian states, and challenging Japanese sovereignty in the East China Sea.

Indeed, during the coronavirus crisis, Beijing has continued to dispatch naval vessels to buttress these claims.

The Trump Administration has responded by doubling down on its predecessor’s reorientation of US policy towards East Asia since 2011, to counter China’s growing power projection activities.

The United States has intensified “freedom of navigation operations” and conducted military exercises to challenge what it views to be “excessive” Chinese maritime claims.

Then, there is Trump’s trade war, which enjoys rare and deep bipartisan support in the United States Congress.

A Phase One agreement between Beijing and Washington was reached in January this year.

The more sensitive aspects of the economic relationship are to be addressed in a Phase Two agreement.

It is an open question whether the escalation of tensions since the onset of the coronavirus crisis has torpedoed negotiations. For the sake of global trade, one hopes not.

Regardless of how the negotiations go, the cracks in the US-China relationship are multiple and deep, stretching from trade and human rights to Great Power rivalry.

In May, the US Government released a ground-breaking report on US-China relations.

It called for “a competitive approach to the People’s Republic of China, based on a clear-eyed assessment of the Chinese Communist Party’s intentions and actions, a reappraisal of the United States’ many strategic advantages and shortfalls and a tolerance of greater bilateral friction”.

This represents a turning point. And the course of the US-China relationship for the next few decades may very well be determined in the months to come.

The question now is whether New Zealand can weather the inevitable storm as a neutral bystander?

This is a hard, if necessary question to absorb, and even harder to answer.

China has been our No 1 trading partner since 2017, while the US has served as the guarantor of our stability in the Asia-Pacific region since the end of World War 2 in 1945.

Some hard-headed thinking is required in the halls of Wellington.

New Zealand’s policymakers cannot uncritically accept that business will carry on as usual in our Asia-Pacific backyard, as it has over the historically halcyon years following the end of the Cold War.

- Nicholas Khoo is an associate professor in the politics programme at the University of Otago. His research focuses on Great Power politics, Chinese foreign policy and Asian security.