Oh what a tangled web they wove... 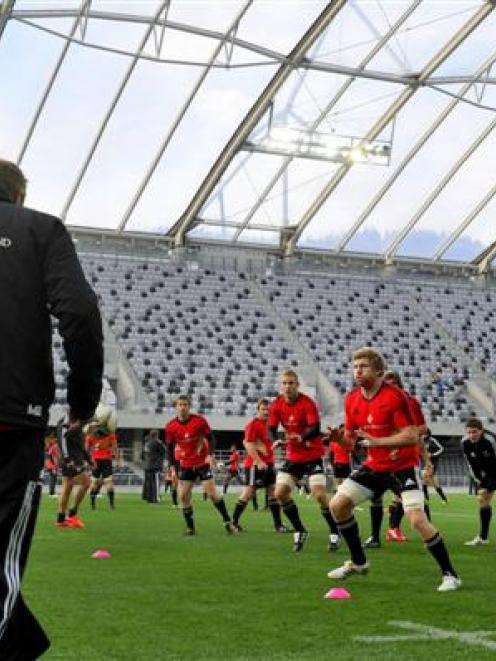 Adam Thomson and the All Blacks train at Forsyth Barr Stadium last month. Photo by Craig Baxter.
Russell Garbutt, a critic of the past council's policies, believes the DCC funding shortfall is not news. In this opinion piece, he argues any surprise in new debt revelations lies in the lack of transparency throughout the Forsyth Barr Stadium project.


The news that our city was facing a financial crisis, announced on Friday and reported in the Otago Daily Times the following day, was not, sadly, really news.

Neither, equally sadly, were the reported comments of new councillor Richard Thomson, who seems to have, through careful questioning, got to the bottom of the money-go-round that has been occurring within the many components of the Dunedin City Council.

Many ratepayers have long suspected what has now been revealed - there is an annual $8 million hole which equates to something in the region of an unbudgeted $60 million shortfall. Cr Thomson quite rightly identifies the fact that if all the facts were known, then the decision to build the stadium which is at the core of the city's debt, should not have been taken.

Factual information and accuracy were seen by many Dunedin ratepayers as key requirements in the various processes leading up to this major project decision, but it was apparent from the outset that many in key positions were determined that transparency was something to be avoided at all costs.

The infamous "blacked out" appendices of the 2007 CST Feasibility Study document when revealed showed that the previous CEO, Jim Harland, who was a strong proponent of the stadium project, advised the council it was important that ratepayers had "perceptions".

Time after time inquiries from ratepayers regarding ratepayer vulnerability were turned down, citing all sorts of spurious reasons such as "commercial sensitivity".

Key councillors, including the previous mayor and the chairman of the Finance and Strategy Committee, told ratepayers that they were still "getting information" and had not made up their minds and "strict conditions would be met" while at the same time voting consistently to proceed at every opportunity. They were not alone.

One of the key components in obscuring facts and processes is to set up a large number of entities to deal with simple issues.

So it was with this stadium project. It is important to list at least some of these component bodies - quite often being run by the same people - that dealt with this project.

There was the Carisbrook Working Party that comprised members of the bodies that the Otago Rugby Football Union had identified as being funders of a new stadium. The Dunedin City Council, the Otago Regional Council and the Community Trust of Otago were not only identified, but had the amounts required from each listed.

Then an entirely private trust - answerable to nobody but the members of the trust - was set up to construct the stadium.

The Carisbrook Stadium Trust, headed by Malcolm Farry, acted as an agent for the council, and then started to work on acquiring land, letting major contracts and formalising the contributions from the DCC, the ORC and the CTO.

It has never been explained why a private Trust was chosen as the means to do this, but one advantage of this arrangement from the point of view of the participants is decreased transparency.

Dunedin Venues Ltd was set up to own the stadium once it was built and this body would own all the debt incurred by building it. Dunedin Venues Management Ltd - with the same board as DVL - would operate the stadium and pay DVL the costs so that DVL could pay off the debt.

Those who served on council years ago set up a group of companies called Dunedin City Holdings Ltd (DCHL) that were designed to run at a profit and at the same time provide a range of services throughout our community. The concept was good and sound and a major by-product was that the profits would subsidise rating increases for Dunedin ratepayers.

What happened was that DCHL agreed to borrow to pay the parent council a dividend so the council could pay for projects such as the stadium that it couldn't afford.

Using one credit card to pay off another is not good practice, but this in effect is what the council and DCHL were doing.

As it has been pointed out, this is unsustainable and the "hole" is now quantified as being in the region of $8 million annually.

What is hard to believe is the council of which Cr Hudson was a member, consistently voted to demand dividends of DCHL - chaired by Cr Hudson - that group of council companies at risk.

He has, I suggest, much to answer for in terms of a conflict of interest. The entire board of DCHL, should in my view, resign on the basis that they agreed to put DCHL into an unsustainable position, but it was Cr Hudson, another consistent stadium supporter, who knew at all times both sides of the story.

I believe that he also needs to resign his position as councillor.

A recent study by an independent local government analyst showed from the June 2010 audited accounts of the DCC that the level of debt carried by each ratepayer in our city is running at four times the national average.

Once the audited June 2011 accounts are received, this is expected to rise to five times the national average. Now we know there is an additional annual $8 million hole to be covered, and this will simply balloon again. Remember that every $1 million of spending is another 1% on the rates.

We as a city deserve better than this and I strongly suggest that those who put us into this position have much to answer for in terms of liability under their obligations to govern our city in a prudent and conservative manner required by the Local Government Act.

It will be incumbent upon Mayor Cull to ensure that we now have any other facts to enable us all to be able to decide just how best to try to extract ourselves from this financial mess that these few people have put us into.

- Russell Garbutt is a Dunedin ratepayer.