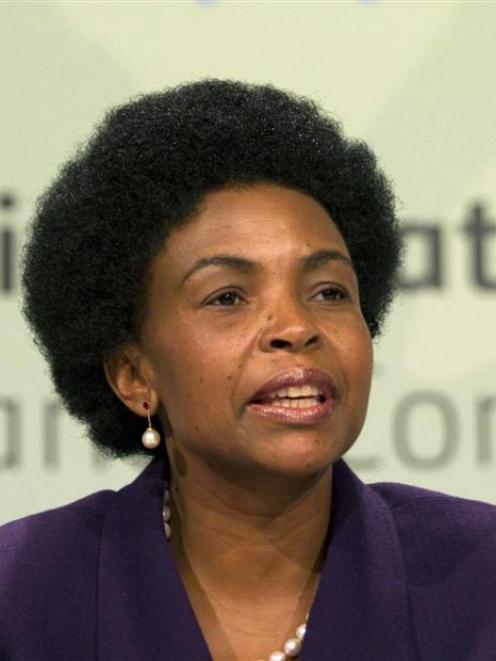 Maite Nakoana-Mashabane, president of the Conference of the Parties of the United Nations Climate Change Conference in Durban, speaks for a common solution at a media conference last week. Photo by Reuters.
The plans for a new global deal on climate change lie broken and abandoned. The usual suspects are meeting again, this time in Durban, but there is even less hope of progress than there was in Cancun last year. The shadow of the disastrous failure in Copenhagen in 2009 still looms over the proceedings like a shroud.

Indeed, even to talk of "progress" is to miss the point. All the effort in Durban is going into preventing further backsliding on the commitments that were made 14 years ago in the Kyoto Protocol to cut the greenhouse gas emissions of the developed countries. The idea of a better, bolder treaty is dead, and even the extension of the modest Kyoto targets for emission reductions beyond 2012 is gravely in doubt.

So the real world of physics and chemistry and global heat balances will just have to wait 10 or 20 years while we human beings sort out our politics and diplomacy. If it won't wait, then we will pay a very high price indeed. How did we get into this mess?

Every government in Durban, even those of "rogue states" on climate issues like China, Canada, Russia and the United States, knows perfectly well that the danger of runaway global warming is real and large. Their own scientists tell them so, and their own military forces are drawing up plans to deal with the consequences. But they do not act on their knowledge, because the politics around energy issues is poisonous.

Take Barack Obama, for instance. Look at the people he hired to advise him on climate and energy, and it's clear that he knows exactly how bad the situation is. But he wants to be re-elected next year, and the climate change denial lobby has been so effective in the United States that he can't afford to say out loud that he takes it very seriously.

Above all, he cannot deviate from the line first taken by George W. Bush, who withdrew from the Kyoto treaty. Bush vowed that he would never sign a treaty mandating emissions cuts by the United States so long as big developing countries like China and India did not have to make similar cuts. Obama says the same, because to do anything else would be political suicide.

His position is fully in tune with public opinion in the West, and especially in the United States, which sees the rapidly developing countries like China, India and Brazil as the heart of the problem. Their emissions are growing very fast because their economies are also growing fast, whereas the "old rich" countries have relatively stable emissions because their economies grow more slowly and they have already built their infrastructure.

It's true, as far as it goes. The bulk of the astounding 6% increase in global greenhouse gas emissions last year came from China and the other emerging economies. China now emits as much carbon dioxide as the United States (though only a quarter as much per citizen). But that's only what Western countries see, because it serves their purposes to be blind to the other side of the argument.

The view from China or India is quite different. They stress the fact that 80% of the greenhouse gases of human origin that are now in the atmosphere came from the small group of developed countries, which have been burning fossil fuels on an industrial scale for 200 years.

They are the real source of the global warming threat, even though they have now more or less stabilised their emissions.

Indeed, if the developed countries had not filled the atmosphere with their emissions for the past 200 years, there would be plenty of room for China and the other developing countries to grow their economies for decades to come, even using fossil fuels on a very large scale, without causing any significant warming. To the developing countries, this is the most important fact of all.

They are right, and the fact that the rich countries ignore their huge historical responsibility for the warming is the reason why a global deal on avoiding large-scale climate change is still close to impossible. You can't insist that everybody must make equal cuts in their emissions when one group bears much more responsibility for the problem than the other.

Everybody at Durban knows what a climate deal would look like if it ever got signed. It would require deep cuts in emissions from the developed countries (40% in 10 years, perhaps), while only asking the emerging economies to cap their emissions where they are now.

Even if they cap their emissions, they would be unwilling to halt their economic growth, so they would need more energy supplies. The new energy would have to come from "clean" power sources like wind, solar and nuclear, and those are more expensive than just burning fossil fuels. Who would cover the difference in cost? The richer countries, of course, because they bear the burden of historical responsibility.

People care a lot about fairness, and only a fair deal that recognises the importance of this history will ever get signed. Since most people in the West don't even know the history, and their governments show no sign of wanting to enlighten them, the deal is not going to get signed any time soon.