Post-quakes rebuild should be in Dunedin 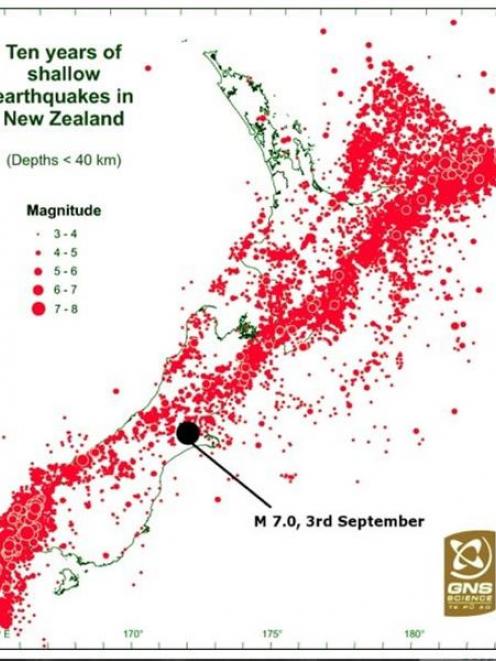 Lee Vandervis asks whether Christchurch should actually be rebuilt.

"When will it end?" contains the assumption that the earthquakes in Christchurch will end. We all hope the earthquakes have ended, of course, but recent geotechnical and historical evidence suggests otherwise.

Earthquakes in other urban areas around the world have usually been one-off disasters. 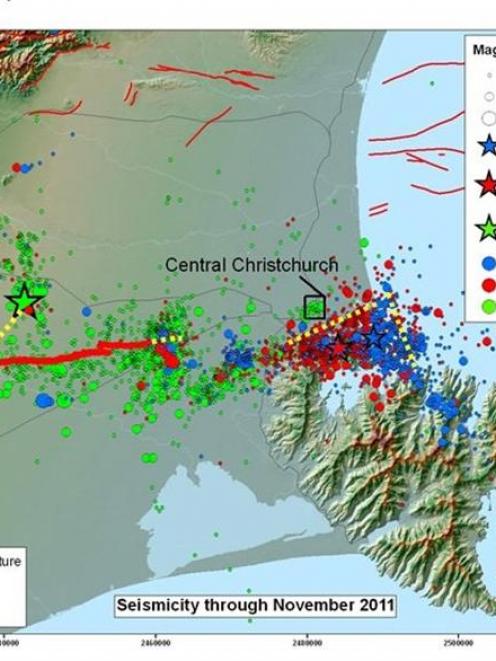 Christchurch is an unusually ongoing seismic disaster that has had unprecedented psychological effects on people living there. The seismicity map shows continuous events for more than a year, from Darfield through Christchurch to Lyttelton.

The commonly described reaction during one of the many big quakes has been "terror" but this ongoing, always anticipated terror has now become a permanent epidemic of social shell shock. Terra infirma. When children become skilled at accurately predicting the Richter scale number of yet another quake, don't we owe it to them to bring them up somewhere secure?

My main question is, why rebuild in Christchurch?

Why put the biggest rebuilding effort in New Zealand history on the same shuddering substratum that destroyed those buildings in the first place?

Rebuilding must take place for sure, but why would you put so much of it into the same bedevilled dirt?

Why not rebuild instead in New Zealand's lowest earthquake-risk city - Dunedin?

The 10 years of less than 40km-deep earthquakes map above highlights Dunedin's distance from earthquake-risk areas.

Dunedin used to be the main centre for the South Island and I believe it should be again for many stability reasons, cultural as well as geotechnical.

Parochialism accounts for much of the assumption to rebuild in Christchurch - a provincial "this is where we have always lived", and "we are Cantabrians" etc. Certainly some rebuilding in Christchurch is justified to use the undamaged infrastructure that must service the area, but to rebuild Christchurch as the South Island's main city/port again seems insane to me.

Insanity has been defined as "doing the same thing and hoping for a different result".

Rebuilding in swampy, sandy Christchurch and hoping for no more earthquakes will doom Christchurch and the South Island to long-term loss of investment and to indefinite insecurity. Biblical warnings against building on sand apply even more to swamp and liquefaction.

For the South Island to flourish, we need solid industry and ports and communications.

Port Lyttelton will always present a potential failure, as will the Christchurch airport.

As a viable alternative, all Port Otago needs is an enlarged inland assembly port and improved road/rail links. All Dunedin International Airport needs is runway extensions for larger aircraft and improved terminal throughput.

Not much business output is produced north of Christchurch anyway, making Dunedin the ideal central portal for everything from dairy to fruit to forestry products. Government rebuild spending in Dunedin would give a much better result than sinking it back into Christchurch.

Urban expansion all the way from Corstorphine to Blackhead beckons as one of many infill areas that would better utilise existing Dunedin infrastructure.

With Dunedin's enormous potential and historical track record, it makes no sense to me to put all our rebuilding eggs into the Christchurch basket-case landscape.

Christchurch is no longer the South Island's centre, it is the epicentre. Christchurch can no longer reliably serve as the island's main business hub - it needs to share this function with Dunedin to ensure southern investment and continuity into the future.

What is needed is long-term political thinking, more enlightened insurance company policy, and the courage to do what is best for the whole of the South Island.

The heart of Christchurch is broken, and should be by-passed.

Dunedin sensitivity about being predatory on Christchurch seems to me like an excuse to sit on our hands and do nothing. Predation is the basis of business competition and is necessary for vitality in business and for viability in world markets. If we can do it better here than in Christchurch we should, and government - local and national - should be right behind us.

At national government level, the decision to rebuild Christchurch in Christchurch looks like simple electioneering, or worse - lack of thinking.

The election is over now, and continuing more serious quakes have given all New Zealanders a challenging Christmas message.

When will we learn?