Ripper game, all the same 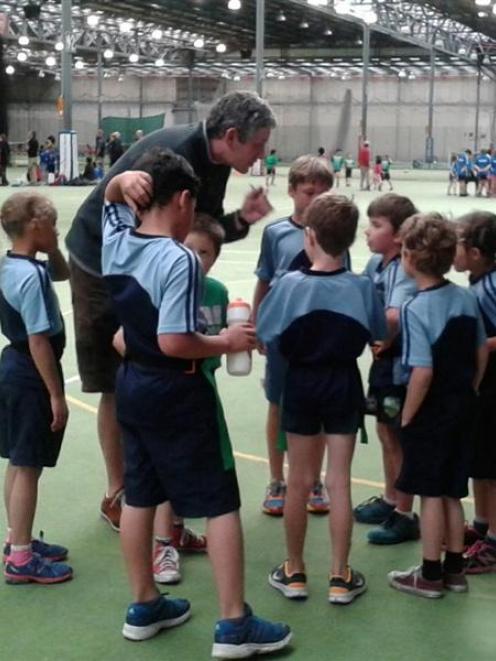 The George St Normal Rockets, down by two in their Rippa rugby game against St Bernadette's, gather around the coach for tactics. Photo by Roy Colbert.
The weekend before last, the Royals weekend, fittingly oversaw three remarkable sporting occasions.

I am not one for filing cabinets, historical results or research, but I would warrant a weekend when both the Highlanders and the Nuggets won at home is inutterably rare, as in, almost never.

But things happen in threes, and the greatest of these three sporting occasions - words like epochal come to mind - was the Rippa rugby final on Monday at the Edgar Centre, where the George Street Normal Rockets met the unbeaten St Bernadette's Hurricanes.

I am a recent devotee of Rippa rugby, goodness knows why - I am not one of those Whim People who race from worm farms through Bikram yoga to gluten-free food.

But if I was being tortured under a blinding white lamp, I would probably admit the fact the grandson Rowan plays for the George Street Normal Rockets has been something of a factor.

Rowan quickly became a student of the game, such is his way.

The week before the final, he and team-mate Issac delivered a lecture to the team on the importance of passing.

So the boy was a team player, unheard of at (just turned) 8.

Being a grandparent who likes to remain respectfully in the shadows, I offered him serious money for every pass he made in the final.

Ten thousand Christian Cullens can only result from this approach.

But George Street Normal might pass all day and they would be doing well to beat St Bernadette's.

Where George Street Normal merely tumble on to the court as a raggle taggle of free thinkers and free spirits, St Bernadette's are wound tight by a papal decree.

Add to that vast sums of money laundered from the Vatican's endless fiscal reserves, and the corruption that runs through Italy like a river, and you have one seriously formidable opponent.

However, as a non-interfering grandparent in the shadows, I should raise my hand slightly here and point out Rowan, an itinerant try-scorer who reminded me of both Christian Cullen AND Israel Dagg, did not play in that game.

I watched the two squads carefully before the game.

A longtime avid sports fan and sports writer like myself can pick up an enormous amount from watching subtle body language.

A St Bernadette's boy behind me had found fault with the water basin and was pounding the tap so hard it made a noise like a cow giving birth.

The team's biggest boy bore a striking resemblance to Inga Tuigamala, in fact, he could have BEEN Inga Tuigamala, Italian corruption knowing no bounds these days. Look no further than their prime minister.

The final began. George Street Normal were a tad desultory in the early minutes, hanging back, reluctant to dictate.

''I think the other team wants it more,'' I said to a complete stranger beside me, who looked blank in reply.

Sometimes cutting-edge sports analysis can fall flat if it is aimed at the wrong ears.

The grandson looked particularly worried, and berated his team-mates to pass, possibly to him, so he could then throw a pass to earn money from his non-interfering granddad.

At half-time, St Bernadette's were up by two.

But the aforementioned corruption reared its ugly head early in the second half when St Bernadette's scored a try and was found to have been playing one extra boy.

They were found to be doing this by the grandson's support team of five screaming their lungs out at the referee.

Not much more could be done after that. St Bernadette's won 8-7 - it would be churlish to mention again they scored with an extra player on the court, so I won't - but everyone looked happy at the end, both teams got ice creams, there were no parental sideline fights.

Rippa rugby was the winner, even though St Bernadette's wanted it more.