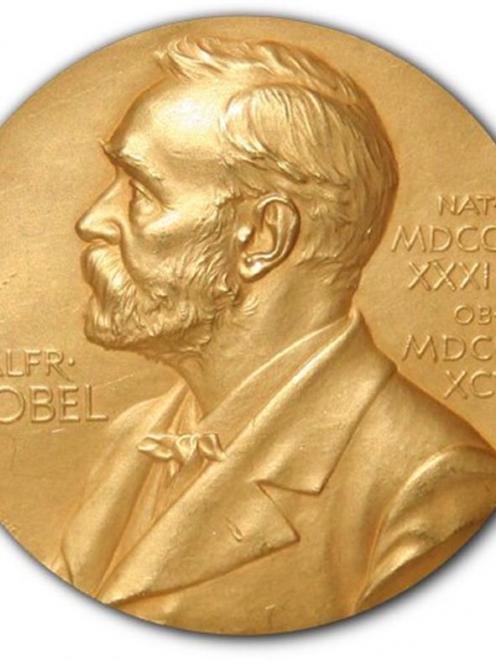 Nobel prize. Photo supplied.
There are myriad unusual human conditions out there with strange and arresting names, none stranger than the aptly entitled Putrid Syndrome. I have this awful thing.

Incredibly, this ailment, which has ruled, nay, destroyed, my social life for decades, is not on Google. Friends working in all matters psycho - psychotherapy and psychiatry - have confirmed Google's lack of finding; there is seemingly no such thing as Putrid Syndrome.

Which is of course tremendously exciting news, for the way is now open for me to win the Nobel Prize for Medicine, an award which carries with it a free trip to the Karolinska Institute in Stockholm, a gold medal to hang around my neck at the beach in summer and $NZ1.5 million in cash.

A man with Putrid Syndrome is Pathologically Unable To Recognise Individual Detail. The condition is essentially an advanced form of myopia.

First the eye fails to discern fine detail, like facial features, and then the brain kicks in as a defensive complement and fogs up the facial image still further until the sufferer sees nothing more than fuzzy mudge, with, if you are lucky, the hint of a nose.

This is all I have seen in people's faces for years, and it has made walking along the street very difficult.

I have taken to staring into space as if in deep intellectual thought, which allows me to sail past close friends with impunity, knowing they were in fact close friends by their shouted jibe of ''Hello Mr Magoo'' three seconds later.

And while I am nothing if not a man who never worries a whit about what I cannot do, every now and then, Putrid Syndrome, which constantly simmers just below the surface, rises up like an angry black lagoon of numbing and utterly unstoppable social humiliation. I have inevitably reached the point where I believe Putrid Syndrome is the most debilitating of all human conditions.

The lagoon rose on the Friday before last at the Hocken Library Chills/Shane Cotton album/art opening.

As I worked the room staring intellectually into high space, four wines already on board, far too many for a 61kg man, Putrid Syndrome suddenly swept over me like a jug of hot brown gravy. A woman, her face, alas, all fuzzy and mudge, engaged me in vivacious conversation.

Assuming she was the wife of the man standing next to her, an old friend, whose wife I knew was American, from Boston, I proceeded on that basis to discuss the recent tragedy in that city. After five minutes of deep and meaningful discussion, mainly me talking, the fuzzy mudge cleared, and, whoa, she was a close personal friend from the upper echelon of the Hocken staff.

Was there time to explain Putrid Syndrome to this woman, charmingly still smiling despite having been insulted beyond belief by being mistaken for an American?

Should I have chosen the defence of drink and thrown myself face down on the floor and passed out? It was as hopeless as a bag of cats.

There have been far worse times than this. One afternoon two years ago, I was walking past the Market Reserve and I saw a woman heading towards me with a vaguely recognisable gait.

When she drew level, I peered discreetly into her face, but saw only fuzzy mudge. Not even a nose. I lowered my head and sailed on.

Three seconds later came the call behind me - ''So you really CAN'T see faces? I thought I'd catch you out!''Yes, it was my wife. I first met her in 1965. I have seen her quite a lot since.

Putrid Syndrome is an awful thing. You cut off your nose to spite the nose you can't see on someone else's face every day of the week. The friend base gets smaller and smaller until the only friends you have are the ones you get by pressing random keys on Facebook.

In many ways, having a Nobel Prize for Medicine will not be compensation enough. I need to get back to seeing through fuzzy mudge.