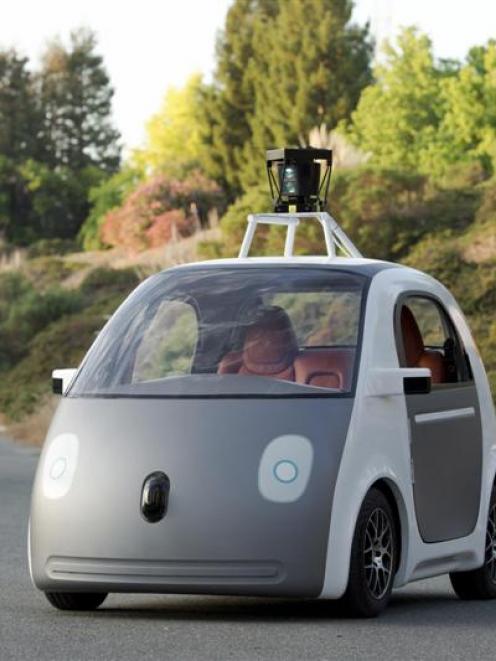 A prototype of a Google driverless car. Photo by Reuters/Google.
I think it was Kylie Minogue who said no man is worthy of a place in heaven until he has successfully told a story against himself.

This is blushingly red-cheekingly true.

Whether I am aspiring to a place in heaven is another story for another time, but I am nothing if not a man who has no difficulty telling a tale that doesn't fail to go against himself.

One day last week, there was probably astrological forewarning, I made a complete Guinness World Records fool of myself.

Mind you, it was the black-ice day, so humans were tumbling into trouble all over town.

I hugely prefer metaphorically affixing gaffer tape to my eyes and stepping boldly into the soot-black cave we call Life.

I prefer not concentrating.

I was walking to Woodhaugh Gardens, probably the coldest place in the Southern Pacific Basin, and I struck a stretch of black ice, which sent me into a slither of slide, arms every which way, terrified magpie cries leaping from the mouth like escaping terrified magpies.

To their credit, passing motorists hooted loudly and often.

I guess they were saying, way to go, mate.

But nearly breaking all my prednisone-weakened bones on black ice was not how I made a fool of myself, that came at the hospital an hour later.

It is a difficult tale to tell without my face reddening so redly that I can barely type, so I will glide very slowly into it with back story and build-up.

Most people have cases or bags as they waddle around town.

I have a laptop case, not because I think it makes me look smart, though that is definitely one reason, but because it is exactly the right size for my needs.

The case I have has four zips. Perhaps this is normal; logically one would suspect only one zip, unless there are four laptops, but this one has four.

How do they work?

Sometimes I choose one and it opens the case perfectly, other times the zip zooms around the outside and meets its brother at the other end with the case still closed.

At other times again a thin section opens on top, presumably for thin papers, though again the two zips can chase each other back and forth forever without ever providing an opening.

One time after a supermarket run when I had zumzippled, this is a legitimate verb, look it up, all four, yet somehow left the case completely open, I arrived home with the case empty.

The police rang shortly after.

How on Earth did you track me down, police?

We just followed the trail, they replied.

So, at the hospital last week I was sitting surrounded by quite a few people, laptop case zumzippled, and I decided to open the thin papers section to read a recently acquired War Cry magazine.

But the big fat lower level section where I would normally put supermarket food and copies of The Luminaries, which I regularly hand out to people on the street to take their mind off the economic situation, suddenly burst open like a swell of surprise party Happy Birthday people, and, splattering out across the floor in front of EVERYONE, went 12 ... well, this is ironic, I have reached my word limit and there is no room to say what the twelve things WERE, a shame really, as this is the punch-line, this is the sort of thing that really makes a fool of a person like, probably, nothing ever before or even in the future of Earth, unless Earth changes dramatically, and who knows, it is changing pretty fast if we now have driverless cars like those ones from the Google people in the news last week.

Driverless cars! Who would have thought?