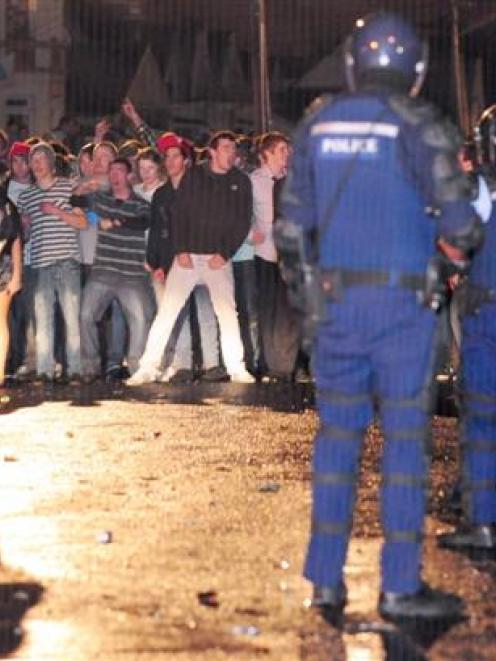 The chaos of castle St at the weekend. Photo by Craig Baxter.
With the predictability of spring following winter, the arrival of last weekend's Undie 500 heralded a slippage into chaos on the streets of North Dunedin.

Scenes of yet another grossly intoxicated, missile-lobbing mob being met by riot police have again got Dunedin on the worldwide stage for all the wrong reasons.

However, this student author will not set out to placate an angry public nor purport to map solutions for an indisputably major problem.

But sick of finger-pointing and general student-bashing, I will challenge our leaders and communities to recast their dialogue in more constructive tones.

We all knew in advance what would happen in the immediate wake of the Undie 500 last weekend.

The rally's timing; its charity focus; its car lock-ups - these were never going to matter.

Though we will never know, concerts and/or other events were unlikely to dent the impact of an official event either.

This was going to be chaos.

In the run-up to the rally, all the players were putting their case to the public, intoxicating the public with a cocktail of hopes for its peaceful passing and consequences for its deterioration into anarchy.

Now, after the inevitable, we are all making loud and well-intentioned noises in the amplifying chamber of almost undivided public attention.

Mayor Peter Chin has come out swinging, alongside city police, at University of Canterbury student leaders and rioters generally.

Scarcely 24 hours later, even Prime Minister John Key has weighed in with comment.

The Otago University PR machine is winding up for damage control and, in their turn, students and student leaders are offering up a splintered concoction of "sorrys" and finger-pointing in any direction but themselves.

While the author cannot claim representative status as might OUSA, Ensoc, or whoever, the public needs to know that students, in an overwhelming majority, are disgusted by the weekend's events and want them consigned to the history books.

We resent this immature, illusory and twisted facade of our fun-loving and generally responsible demographic.

We know all about the universally damaging nature of such events and the time it will take to rebuild public trust.

But to lay blame on students is intolerable.

Discourse surrounding the event, now as in previous years, boils down to notions of responsibility, consequences and ownership.

It involves the digging in at opposing value positions.

Taking place in a context of mutual incredulity, it is the classic generational war.

We all talked the talk, and history repeated itself.

What should now be obvious is that no amount of finger-pointing is taking us anywhere positive any time soon.

When the only remaining answers attack the core of our liberal-democratic traditions, we know the potential of our dialogue, if it may be so called, has run out.

"Undie riots" are a mere symptom of problems needing to be set in much wider context.

This is not an open-shut case.

So let us wake up.

What is obvious is that the perpetrators need to take their overwhelming share of responsibility and the law must visit heavily upon them.

But only when we remove our self-deluding "us-and-them" mentality can we know that this is no solution.

It chops the proverbial perennial from the field, but fails to dig the causative bulb.

We need to discard our general notions of "taking responsibility" and stamp, together, on the causes of interconnected issues in North Dunedin.

Yes, those who were on Castle St need to ask questions of themselves and face their music.

The rest of us need to ask serious questions of liquor distributors with seriously fattened wallets; of the ridiculously naive "hope-for-the-best" attitude adopted by our student leaders; of a university prepared to accept destructive dropouts into its community; of a fuel-desperate media; of lazily grandstanding local and national politicians; even of a police force which has been known at times to provoke.

Most of all, however, we need to ask of our desire to stand together as a community, ready and willing to withstand attacks, by tiny minorities, on the values we hold dear and address their causes.

I challenge leaders and the public to recast debate in this way.

"Undie riots" are a mere symptom of wider and deeper issues which the Government, courts, the Law Commission and business and communities know all about.

If we really want to sort out these issues, causes need to be identified and addressed.

To the genuine and universal desire for solutions needs to be added the courage to abandon our "us-and-them" mentality.

The sniping from entrenched positions must stop now.

We all own last weekend. - Allan Brent


The chaos of Castle St at the weekend.