Vale, Bob - you were the best 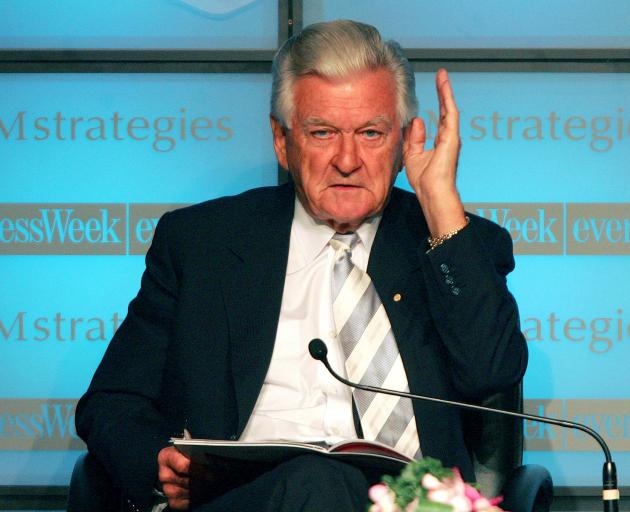 Former Australian Prime Minister Bob Hawke speaks at the Asia Leadership Forum in Bangkok in 2005. Hawke died on May 16. Photo: Reuters
Self- made millionaires are a fervently right-wing species. They've started from scratch, stared down the big bad world, and made their motza. They have little time for "spongers" and "lefties", writes John Lapsley.

Some years back, I was at a conference of Aussie self-mades. Shut in a room, a dozen were asked to nominate their best Australian prime minister.

The first scratched his chin, then offered: "I hate Labour, but it's got to be Bob Hawke."

Then a third and fourth. In fact, all 12 believed the trade union boss who gave up the booze to become Prime Minister, was the best.

When a frail Bob Hawke died last week, the grief from all sides of Australian society was real. The loss seemed keener because in the squabblin' desert of Australian politics, another Bob Hawke is impossible. (For starters, he'd have been "politically corrected" out of parliament in his first week).

Through the 1960s and `70s, the country was so strike-torn that each day the national newspaper, The Australian, devoted its entire page two to industrial action. Bob Hawke, then the trade unions' president, became the master of sorting out this industrial dog's breakfast. When a strike seemed unsolvable, Bob flew in, and somehow, he'd break through the logjam of distrust and resentment.

As a television interviewer then, it seemed I spent a third of my life quizzing a usually scowling Hawke, as he set out the latest strike's realities. He was a tough interview: sharp, fearsomely intelligent, and ready to flame you the instant you asked something loose.

With the interview done, like as not he'd grin and ask: "Can you give me a lift to Elizabeth St? We could grab a beer, then head off."

He was hard to dislike. Bob Hawke's greatest talent was getting fiercely opposed enemies to see the places they could actually progress. Four weeks after he became Prime Minister, he used Parliament House and all its symbolism for something unheard of: an economic summit between (dear God) employers and unions.

The aim was to get the warring sides to agree the best ways to take the economy forward. Before the year was out, the unions had signed an accord to restrict wage claims, in return for Hawke's pledge to minimise inflation. One side of the pledge, of course, helped solve the other. Long-term industrial peace broke out.

With this in place, four successive Hawke governments got on with major reforms. Many were radical, but somehow seemed no huge deal, because of Hawke's knack for first building consensus.

I'm not his obituary writer, so I won't try to detail the importance of his reforms. But I make one over-riding point: none of them were doctrinaire. He was far more interested in achieving practical good, than idealised political theory.

He asked then he listened. Hawke was congenitally incapable of misunderstanding Australians in the way Labour's Bill Shorten has in 2019. He found or built strong ministers, especially his Treasurer and eventual Brutus, Paul Keating.

I shared a flight with Hawke a full six years after Keating rolled him in 1991. He still wouldn't utter Keating's name. (Years later, they did reconcile).

Hawke was of course a Rhodes Scholar, and before he became PM, a womaniser and a big drinker. Always one of the boys, the obituaries tag him a larrikin. He was far deeper than that. But he wasn't much interested in the arts. As Hawke's hair grew grey, Patrick White, the grand man of Australian literature, loftily dubbed him The Silver Bodgie. (I doubt White had met either a bodgie or a docker).

When I sold a Sydney business I'd started, the buyer was a multinational struggling for a foothold in China's vast potential. Few knew the Beijing ropes, and Hawke's very profitable "retirement" business offered access to his insider Chinese contacts.

I asked Hawke to help (for a fat fee), and as our first meeting ended, the two Englishmen who managed the Asia-Pacific region began talking test cricket. Hawke, always the punter, bet with them on an Ashes test starting that week. Australia won, and a couple of weeks later I checked whether the Poms had settled up.

"You mean he was serious?" they asked. I could only roll my eyes.

"Hawkey" wore his faults on his sleeve, but was a good-hearted political genius who Australians came to love. He was certainly one of their greatest.

- John Lapsley, who lives in Arrowtown, worked in Australia for 35 years.