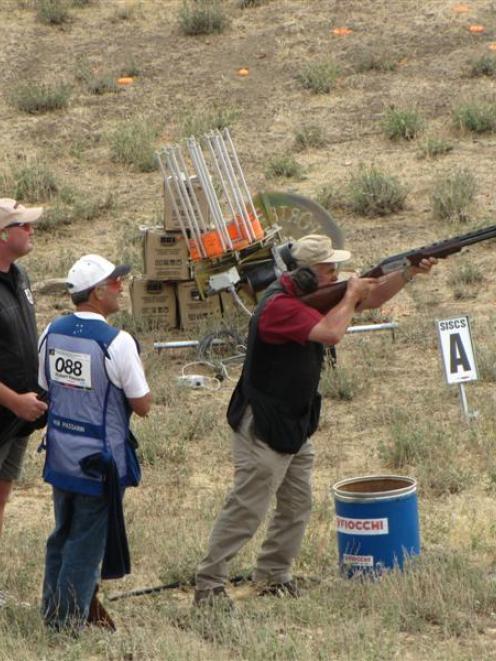 Michael Gould, of New Zealand, sights his target while Bruce Scott (left), of Auckland, Scott McDonald of Australia and Robert Passarin of Australia look on, at the international clay shooting competition at Northburn Station. Photo by Sarah Marquet.
The hills were alive with the sound of gunshots - music to the ears of some, particularly the competitors in the international clay shooting competition being held at Northburn Station near Cromwell.

As the booms echoed around the hills, brightly coloured clay targets fell to the ground in pieces or carried on in predetermined trajectories, and competitors either smiled modestly or cursed while reloading their guns or searching for their next target.

Each competitor shot at 75 targets yesterday over eight different fields designed by Graham Brown of Timaru.

At the end of the day John Younger, of Australia, was leading the field after successfully shooting 67 targets.

Mark Marshall, of England, was second on 66 and Ed Treadwell, of Australia, was third on 62.

The highest-placed New Zealander was Brian Deadman, of Waiuku, with a score of 61.

They will all also shoot at 75 today and 50 tomorrow of the bright yellow, bright orange, white or black targets mostly measuring 10cm wide and shaped to provide specific flight patterns meant to mimic birds or rabbits.

For a shot to count as a point, the target doesn't need to be completely broken but does need to have a visible chip out of it.

Competitors are only allowed to use double-barrelled guns.

Mr Winsloe said New Zealanders on the course were competing for the chance to represent the country at the world championships to be held in Chicago in August.

There is also the Oceania championships, which will be held in Waikato at Easter, in which they can prove their worth for the national team.

FITASC vice-president Ray McFarlane, of Geelong, Australia, said he thought the station was a great venue.

"The terrain is rough and rugged and just what we like ... the targets aren't easy but there are some high scores."

The 2012 sporting clay nationals, the New Zealand national competition, was contested over the weekend, with Mark Vessey, of Auckland, taking top honours with a score of 178 out of a possible 200.

He is originally from England and represented that country at an international level but agreed the targets were hard and the terrain difficult.

"But it's a true test of shooting ability."