Buckets of rain for better and worse 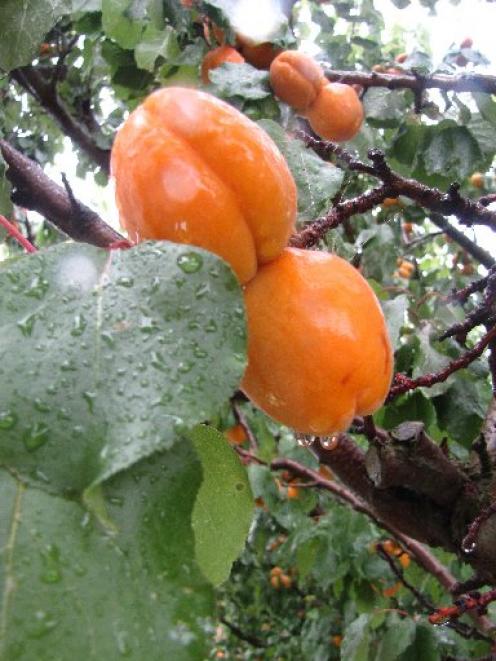 Apricots, as well as cherries, could be damaged by the persistent rain. Photo by Sarah Marquet.
Heavy rain which began in Central Otago with a thunderstorm on Thursday evening has met a mixed reception.

Orchardists were cursing the rain yesterday and wondering if fragile cherry crops would survive. They said they would not know the extent of any damage until the rain stopped.

Summerfruit New Zealand chairman and Roxburgh cherry-grower Gary Bennetts said he would not even look at his crop until the rain stopped because it was "disheartening" to see the damage.

By mid-afternoon yesterday, about 40mm of rain had fallen on his orchard and it showed no signs of letting up.

He said it was not necessarily the amount of rain that was bad, but the length of time things stayed wet.

"If they dry off a bit, that's better, but it has been constantly wet, so there's damage."

He said there could be "substantial" damage in Central Otago, where the cherry crop was worth about $45 million.

The worst thing that could happen would be for the temperature to rise, which would crack the fruit.

Mr Bennetts said the rain could also be a problem for apricots, as too much moisture would cause them to go brown.

General manager of 45 South Management Ltd, Tim Jones, of Cromwell, said the rain there was lighter than in other areas, about 20mm by mid-afternoon yesterday, and because the temperature was "cool enough" he didn't think there would be too much damage. However, he was keeping his "fingers crossed".

Summerfruit Orchards general manager Ian Nicholls, of Earnscleugh, said some of the crop might have been damaged.

Oturehua farmer and chairman of the Hawkdun Ida Irrigation company Ken Gillespie, on the other hand, said the rain was "absolutely tremendous".

"It's a real plus for the establishment of crops and pastures."

Alexandra Volunteer Fire Brigade chief fire officer Russell Anderson said the fire risk would be reduced for the time being.