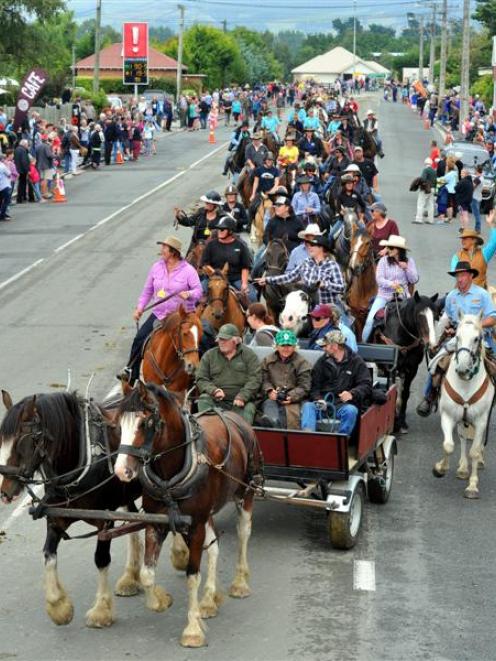 Cavalcaders arrive in Outram in February, at the end of the 2015 events. Photo by Gregor Richardson.
Traditional will meet vintage at the Roxburgh Racecourse next February.

The annual Otago Goldfields Cavalcade will coincide with the 2016 Mt Benger A&P Show at the racecourse.

The combined events are expected to draw thousands to the area on February 20.

Roxburgh Cavalcade committee spokesman and Mt Benger A&P president Dick Michelle said the show was normally held at Roxburgh Sportsgrounds but due to ''logistic problems'' both events would be held at the racecourse ''just for this occasion''.

The ''traditional A&P country show'', would feature food, art and entertainment, while the cavalcade would finish with a traditional hoedown. Cavalcade organiser Terry Davis said

Participants will travel for up to seven days from places such as Athol, Tarras, Outram and Serpentine on horses or in horse-drawn wagons, or up to five days by foot.

Travelling 20km to 40km a day, riders and walkers would ''rough it'' in woolsheds and basic accommodation and would have catering crews with them to prepare breakfast, lunch and dinner.

Clubs and non-profit organisations will be paid to cater for the cavalcaders.

The organisations are expected to raise a combined total of about $100,000.

Some of that money is also ''dispersed'' among small communities, including schools, kindergartens and community groups along the way.

The cavalcade, organised by Otago Goldfields Heritage Trust, started in 1992 as a re-enactment of the gold rush days and there was ''nothing else like it in the world''.

Mr Davis said when it came to planning the cavalcade, he tried to ''keep it really simple''.