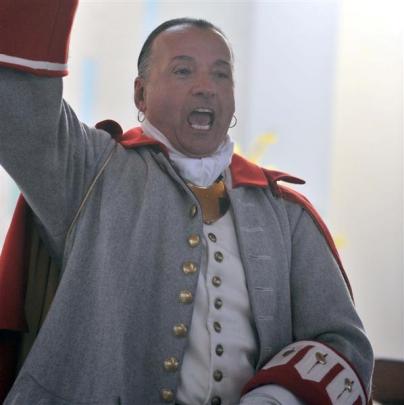 Daniel Richer dit LaFleche, of Gatineau, Quebec, and his fellow town criers, who are battling it out at the Central Otago World Town Crier Tournament. Photos by Craig Baxter. 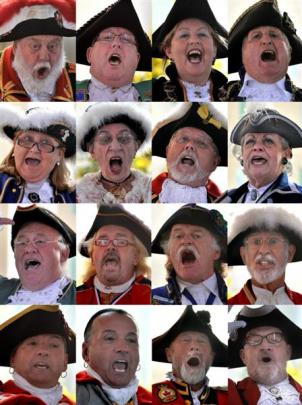 The town criers, who are battling it out at the Central Otago World Town Crier Tournament.

He calls himself a member of the ''first nation'' people, belonging to the Abenaki tribe, which means ''people on which the sun rises''.

He told the Otago Daily Times the role was a natural combination of his passions - acting and teaching history.

Mr dit LaFleche fell into the town crier role while working on operas for the National Arts Centre, in Canada, when he would promote the productions to ''accidental'' tourists with a cry to draw them in.

He was subsequently named the provincial crier of Ontario and held the title of the Senior Town Crier of North America for 34 years.

''You know how many times people say: I was born 100 years too late. I would've loved to have lived in those times - we actually get to do it.''

''Even in this world of modern technology, you've never had so many ways of communicating, [but] we've never communicated so little to each other.

''The town crier brings back that human touch to everything.''

As a full-time town crier, he opens festivals and events, but also officiates at love proclamations and wedding proposals.

His first nation culture and role of town crier had a lot in common, he said.

Tribes often had a ''witness'', a town crier who would tell stories of battles and hunting expeditions.

The trip to the Central Otago competition is his first to New Zealand. He is travelling with partner Julia Dudley.

Another Canadian, David McKee, was third.

About 12 judges officiate in the competition, judging performance, delivery, lyrics, dress, how well they engage the audience and ambassador qualities.