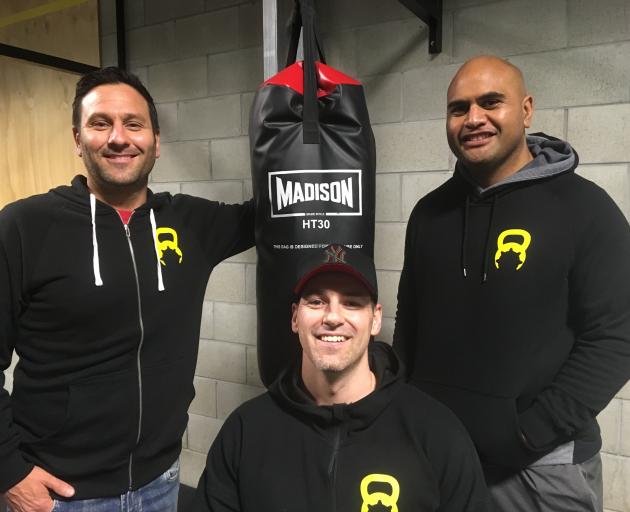 Preparations are under way for a charity boxing match in Cromwell later in the year. Among those bringing the event together are (from left) Damon Rolls, Matt Edwards and Lelei Aholelei. PHOTO: ALEXIA JOHNSTON
A charity boxing match planned for Cromwell aims to knock the support needed for mental wellbeing in the right direction.

Cromwell man Matt Edwards came up with the idea after realising the need based on his own personal experience and those close to him.

The event, called The Right Fight charity boxing match, along with an auction on the night and tiny house raffle will go towards Mr Edwards' newly launched charity, Lean On Me.

The charity will provide support for mental health and raise awareness of the challenges the condition can cause.

Mr Edwards, who has co-ordinated the event in conjunction with Damon Rolls, said he created the charity following his own mental health experiences.

Mr Edwards also had a close family friend who suffered from mental illness.

It was at that point he decided he had to do something.

The money raised will help remove one of the key barriers people often faced when seeking help - affordability.

Mr Edwards said to help remove that barrier, Lean On Me funds would be made available to assist people who needed support, including counselling.

The charity will receive a much-needed boost when The Right Fight takes place on December 7.

About 30 places are available for people wanting to take part in the initial charity boxing match training sessions, hosted by trainers through The Workshop Fitness Centre.

The sessions, led by trainer Lelei Aholelei, will be designed to determine whether each person has what it takes to compete.

Ten to 12 people will be selected to go on to the contender stage, where they will be conditioned for the event and matched for the competitive stage.

A boxing commissioner had signed off the event and agreed to provide the referees and the ring to ensure everything was up to code, Mr Edwards said.

One can appreciate the intent, but does anyone else see the irony in using a sport that involves deliberately inflicting traumatic brain injury on the opponent to raise money for mental health?